There's lots of downtime during couture week, which begins Monday, so here are some stores, restaurants and spas to squeeze into the schedule. 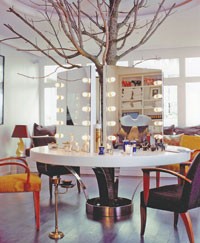 There’s lots of downtime during couture week, which begins Monday, so here are some stores, restaurants and spas to squeeze into the schedule.

THE EYES HAVE IT
The Spa du Regard (or “sight spa” in English) is billed as a first. One flight up from the high-end Esple eyeglasses store is a cozy room offering a workout for peepers, called Eye-San. Conceived by an in-house optician and orthopedist, the treatment involves eye-muscle exercises, plus a focus on breathing and visualizations to help keep vision in tip-top shape. A one-hour session costs 80 euros, or $103, and there are package deals. Also on offer are two different types of massages for the eyes. One is inspired by shiatsu and uses digitopression and crystals, plus oils and creams, to brighten the eye area and face. The other is based on traditional Chinese massage (with reflexology) to help revive the area around the eyes. Each session lasts for one hour and costs 85 euros, or $110.
Esple, 40 Rue Saint Sulpice, 75006; 331-44-07-11-99

SMOOTH OPERATOR
L’Arôme is a friendly new 65-seat bistro in the posh 8th arrondissement with dim lighting and subtle Asian accents. The bistro serves tasty dishes such as a velvety pumpkin soup with chestnut chunks, a creamy langoustine risotto and shellfish coulis and roasted turbot served with parsnips. Dinner for two runs around 170 euros, or $215 at current exchange, including wine.
L’Arôme: 3 Rue Saint Philippe-du-Roule, 75008; 331-42-25-55-98

ARTSY SNACKS
Reopened last fall after a decade of renovations, Paris’ Decorative Arts museum now has its own restaurant, Le Saut du Loup. With a contemporary decor, the two-level eatery features luxury bistro fare, from hamburgers and Caesar salad to pastries from Laduree. Its sprawling garden terrace is sure to be a hit in the summer.
Le Saut du Loup: 107 Rue de Riovli, 75001; 331-42-25-49-55

HANDS ON
Parisian lingerie designer Fifi Chachnil will unveil her new line of couture gloves on Monday. Featuring semiprecious jewels, the leather creations range from $500 to $5,000. Chachnil’s line of custom-made cocktail dresses and corsets will also be on display, as well as the fall lingerie collection.
Fifi Chachnil, 68 Rue Jean-Jacques Rousseau, 75001; 331-42-21-19-93