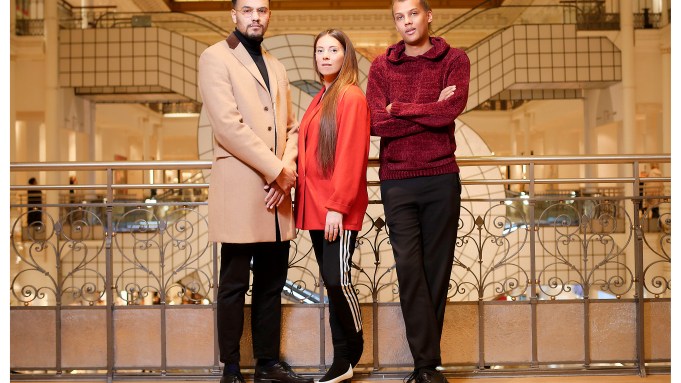 PARIS — Mosaert, the creative collective built around Belgian singer-songwriter Paul Van Haver — aka Stromae — is taking over Paris department store Le Bon Marché for the launch of its fifth capsule collection, which for the first time will extend to homeware.

Built on print-heavy, Made in Europe unisex capsules hooked on polo shirts and socks, the Mosaert clothing label — cofounded with his stylist wife Coralie Barbier — launched around the time of the artist’s best-selling “Racine Carrée” (or “Square Root”) album in 2013.

As the singer has taken a break from performing after suffering violent side effects from a malaria treatment in 2015, the line has evolved into a more complete sportswear offering, which will be showcased with its first fashion show, scheduled to take place at the department store on April 6.

In an interview with WWD, Van Haver, his brother Luc Junior Tam and Barbier said they designed the event — which will also include window displays and an original song — to evoke an imaginary factory, not unlike their label, which has directed music videos for artists like Dua Lipa and Major Lazer.

“It’s a little more fantastic than Warhol’s Factory, I think. His had a rawer feel. Ours is more joyful and magical, in that it’s part of our philosophy of promoting European manual crafts,” said Van Haver, wearing a red chenille hoodie and his long hair tied in a topknot.

The patterns this time around were inspired by the floral-themed Art Nouveau ceramic tiles which can be found all over Brussels. “I thought it would be fun to contrast sportswear shapes with the more romantic feel of Art Nouveau motifs,” Barbier explained.

No longer tethered to Van Haver’s former pop-dandy look, which tumbled together African and English country-gentleman influences, the line now has a broader appeal. The Bon Marché pop-up, which will remain open through May 13, will also feature slides and baseball caps designed with French denim label Notify.

“Given that the Stromae project is on standby for the time being, the music is no longer driving everything else. Now it’s really Coralie making her own choices. She no longer has to design based on my songs. It’s me who has to adapt to her vision,” Van Haver said.

In any case, the singer is over the vividly colored jackets and bow ties that were long his signature. “I’d been wearing clothes that were not particularly comfortable for the last 10 years, so now I’m leaning toward a more sober, laid-back look,” he said.

He recently dipped his toes back into music via a collaboration with French rapper Orelsan, and composing the soundtrack for the Mosaert fashion show, which will be choreographed by the group’s regular collaborator, Marion Motin.

Van Haver, who has attended shows by Kenzo, Valentino and Louis Vuitton, said the song — which will be released subsequently on streaming platforms — was inspired by his front-row experiences.

“All the themes are based around fashion, beauty, catwalk shows and walking,” he said. “I’ve been particularly impressed by Chanel’s shows, which usually feature amazing sets, and since my background is live performance, I naturally wanted to bring my own twist to the format.”

Having inked a deal earlier this year with WME and IMG, Van Haver is looking forward to expanding his music and fashion portfolios.

“I think I’m going to be more open to campaigns than I was in the past,” he said. “Perhaps it’s because I have been increasingly exposed to the United States, where artists are much more uninhibited about working with clothing brands. Here in Europe, there is still a little stigma attached to that.”