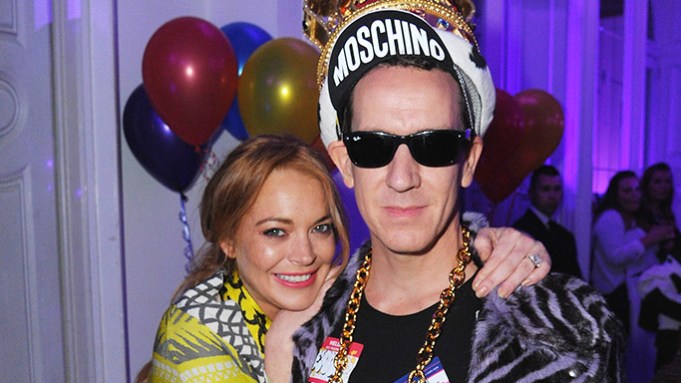 FUN AND GAMES: When he was appointed Moschino’s creative director, Jeremy Scott announced that he would show his first men’s collection for the house in London, a decision that was “instinctive, for fun and inspirational,” the company told WWD at the time.

He’s always had ties with the city, previously showing his signature collection in the British capital.

When Scott returned to London last fall, he put on another memorable production with a snow-filled runway. In true Moschino style, he transformed the models into mountaineering ravers wearing zebra-patterned faux fur and metallic floral coats.

His loud, more-is-more aesthetic has resonated with a number of familiar faces, from Wiz Khalifa and Labrinth to Lindsay Lohan and Miley Cyrus, earning Scott a dedicated fan club, whose members often sit front row to cheer him on.

He celebrated the release of his documentary “Jeremy Scott: The People’s Designer” last summer with his host of celebrity friends, at Il Bottaccio in London’s Belgravia.

“It’s a little tongue-in-cheek — that’s my role, my gift to the world, to try to bring a little bit of a smile,” Scott said.

Scott’s invitation to today’s show was typically cheeky. “Be sure to tune in online to watch the live feed of my Moschino men’s show tomorrow at 5 p.m., fashionably late of course,” he wrote to his 1.2m Instagram followers ahead of the fall 2016 show tonight.