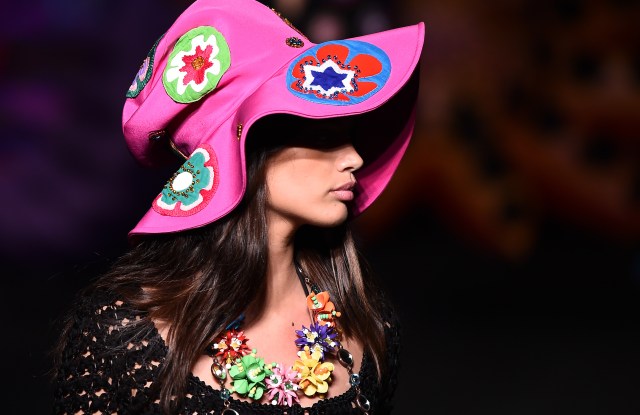 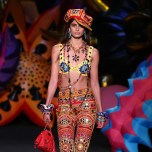 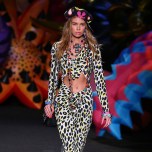 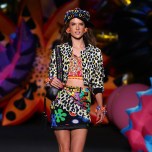 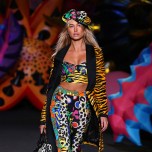 Anyone familiar with Jeremy Scott and his work as creative director for Moschino comes to one of his runway shows anticipating colorful, playful clothes infused with happiness and cheek that leave the audience feeling uplifted, humored, or at least bobbing along with the music. That was the hope for what a major fashion show like Moschino would do for the Los Angeles fashion show scene. On both counts, it succeeded.

The combined men’s spring 2017 and women’s resort 2017 show Scott presented on Friday night at the L.A. Live Event Deck was both a love letter to his adopted hometown and a boon for the city that has been winning on nearly every front of late except the runway scene.

Supported by his loyal BFF Katy Perry, who said, “I’d never miss one of Jeremy’s shows,” as well as a cadre of pop songstresses and starlets including Jhene Aiko, Christina Milian, Vanessa Hudgens and Bella Thorne, plus famous LGBT faces Caitlyn Jenner, Candis Cayne, Soko and Colton Haynes, Scott created the sort of entertainment event that felt at home in a venue that also hosts musical headliners and Hollywood awards shows.

“It’s Jeremy, so only the best and most vibrant and colorful is what you expect,” said Amber Rose. “His shows are always very entertaining. That’s why I come to support; he’s a creative genius. And I don’t have to travel all the way to Paris to see him, so it’s awesome.”

“I have to be on the red eye so many times a month that it’s always a treat to be able to do something fashion here in the city. L.A. needs more fashion people and I feel like they are starting to get the vibe that I got nine years ago,” said Ambrosio.

Crawford said she was “trying not to be an embarrassing mom” when she went backstage with husband Rande Gerber and daughter Kaia to wish her son good luck on his first show (she did cause a mini-commotion for the many camera crews backstage). “I wish I could have been a fly on the wall because this is my son’s first time in this kind of environment. We live in Malibu, which is a great place to grow up, but they are both teenagers now and they are ready for more stimulation from meeting new people,” Crawford said.

At 14, Kaia was waiting for her turn on the catwalk. “I want to when I’m old enough,” she said. In the meantime, she was soaking in the vivid set. “It’s so inspiring to see that,” she said. “I wish I was that creative.”

For his part, Scott was the most relaxed he’s ever been pre-show. “It’s so much fun for me to show at home. First of all, I drove myself here in my own car, and I was just doing my fittings at Milk Studio, like, seven minutes from my house. It was so wonderful and peaceful for me to be able to work here.”

He also noted that it was a pleasure to welcome not only his famous and fashion friends, but also “neighbors and my favorite SoulCycle instructor. It feels very loving and familiar.”

He mined his surroundings for design inspiration. “I was thinking of all the different vibes I love here, from the hippie-dippy Sixties look to the multiple cultures and how we all coexist,” he said.

That was evident in the Summer of Love, psychedelic colors and silhouettes — flared pants, midriff-baring corset tops, maxidresses — and the multiple ethnic embellishments such as Shisha-inspired mirror adornment and Sangallo embroideries. Even in the contemporary sportswear, sexy swimwear and sophisticated suiting, there was a riot of color and texture: fine-gauge knits, patchwork crochet, holographic floral appliqués.

“I like the idea of all those different hand techniques and cultural things. I even did Pop Goths in all black with sunny embroidery or appliqués. I was trying to play with different archetypes like the cool girls who would be, like heading down Melrose totally done up in the daytime. I just played with what I think about L.A. Maybe it’s my heightened-volume, turned-up version of it, but it’s how I see it and what I love about it.”

Scott also incorporated his own way of dressing, such as the multilayered beaded necklaces he’s been wearing lately, into the collection. “I hope people enjoy the show but also just enjoy the whole atmosphere.”

“Empire” starlet Serayah McNeill was impressed by the lengths that Moschino went to stage the show. “I was just talking to Christina about it,” she said, glancing around for Milian, who scooted away after their photo opp together. “I’ve never been to anything so big here.”

An exuberant Soko summed it up by saying, “I loved Jeremy’s show because he brings all the freaks out, all these different people whom people can relate to. It’s such an achievement, it’s a great f—ing moment for L.A. fashion.”