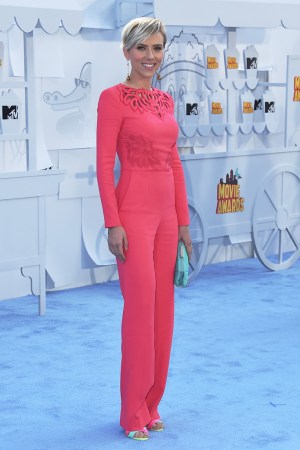 “Charlize! You’re gorgeous!” shouted a reporter, causing several heads to turn in search of Charlize Theron. However, the actress in question was actually a pantsuit-clad Scarlett Johansson. The “Avengers: Age of Ultron” actress laughed off the faux pas as she swiftly made her way inside. Both Johansson and Woodley opted for edgy pantsuits while most others—like Lopez, Victoria Justice, Bella Thorne, and Emily Ratajkowski—rocked minis.

Hailee Steinfeld showed up in an edgy Rodarte ensemble to promote this summer’s “Pitch Perfect” sequel. She looked the part, but admitted she felt ill-prepared for the rather long show ahead. “I didn’t eat anything. I’m starving!” she said. Cara Delevingne arrived more prepared. “I had fried chicken!” said the model.

Others on hand included 18-year-old newcomer Stefanie Scott, who has “Insidious: Chapter 3” and the anticipated “Jem and the Holograms” out later this year. She said she’s been enjoying all the preparation that goes into promoting her upcoming projects. “I’m getting really into the fashion side of everything. I spent the last year working on films, so this year I didn’t really realize that I get to promote the movies. I forgot about that, so now I’m excited because I get to dress up all the time.” Of “Jem,” which is due out in October, Scott said, “Just wait — the wardrobe, the hair, and the make-up is epic. And the music is incredible.”

“22 Jump Street” star Jillian Bell, up for two nominations during the show, didn’t put as much effort into her look. “I got it at a boutique around the corner from my house,” said Bell. “I know what I like and hopefully people don’t hate it and make fun of me for it.” Nominated for both Best Villain and Best Fight Scene (alongside Jonah Hill), Bell joked she could probably take on a few people in her category. “I think Jonah and I would have a lot of fun fighting Zac Efron and Seth Rogen.” Fittingly Bell plays Rogen’s wife in this December’s “Christmas Eve” with Joseph Gordon-Levitt, Lizzy Caplan, and Anthony Mackie. She also has “Goosebumps,” based on the popular R.L. Stein books, out this summer.

Meanwhile, nominee Zach Gilford said the men absolutely have it easier than the women. “I usually dress like a homeless person, so this is a nice change. It took me ten minutes to get ready. I think the longest part was tying my tie. It took me like four tries,” said The Purge: Anarchy star. “ As for his Best Scared-as-sh** Performance nomination? “I was actually shocked. I’m up against Rosamund and J-Lo!”