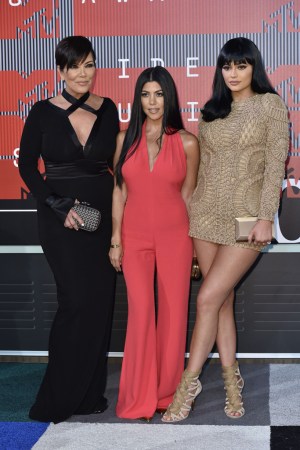 The MTV Video Music Awards dress code has long been clothing optional and with Miley Cyrus hosting this year’s show it was safe to assume the trend would continue. Needless to say, the hostess didn’t disappoint wearing what looked like tinfoil over her naughty bits — a Space Age, Barbella-like ensemble by Versace.

For its part, MTV went all out in production value this year with an expansive black tent for arrivals and pre-show designed by Jeremy Scott. The space featured the designer’s signature bright colors. “I was taking it back to old school MTV,” said Scott, who coordinated his custom made techni-color tux to match the multi-colored carpet and pre-show event space which he designed. “It means the world to me. This is my world. It’s where fashion and music meets pop culture and that’s me.” Next up on his plate? Madonna’s tour costumes. “It’s great. It’s almost all done. What can I tease? It’s going to be very glamorous. It’s all going to sparkle.”

You Tubers aside, Taylor Swift and her girl posse were the first to arrive—Swift flanked by her usual crew including Gigi Hadid, Cara Delevigne, Selena Gomez, Lily Aldridge, Hailee Steinfeld and Mariska Hargitay. (Swift’s cat is named after the “SVU” star’s on screen alter ego.) Carlson Young from MTV’s “Scream” said her dreams were tarnished once she saw the supermodels on parade. “I realized I’m not tall enough to be in that posse, so that’s upsetting,” she lamented. “I’m a little sad about that.”

Kat Graham opted for a strapless, vintage archive 1990’s vintage Versace. “If it were a supermarket day, I’d be wearing this at the supermarket, but today was the day I was going to wear this dress no matter what.”

Some wanted to push the envelope while others wanted to push their own brands. “This is Hex. Hex is very important,” said T-Pain, of his mirrored plastic tie. “I wanted to give them some exposure.” The rapper looked dapper in a blazer and jeans and noted that his trademark dreadlocks are now a thing of the past. “I’m not big into fashion, but I know when I look damn good. I had to see pictures of past VMAs and how terrible I looked in those to know how to come this time.”

Nominee Vance Joy said he’s enjoying newfound attention thanks to his hit single “Rip Tide” and opening act for Taylor Swift. “I’ve been handling it pretty well. It’s a right of passage. You never know what it’s going to be like until you do it.” As for his sense of style, he admitted, “I’m not a fashion guy, but more and more I’m interested in style. I like the way some people look like Joaquin Phoenix when he’s in films. He’s got an innate style.”

Britney Spears was the last to pose for the photographers before Nick Jonas ushered the audience into the theater with a performance of his new song “Levels” and a round of confetti. Earlier, the singer reflected on ex-girlfriend Miley Cyrus. “She’s going to kill it.” But that didn’t mean a backstage reunion was in order. “I’m sure she’s going to be very, very busy tonight. Hosting duties are very intense…. It’s a lot of work, but she’ll have a lot of fun tonight!”