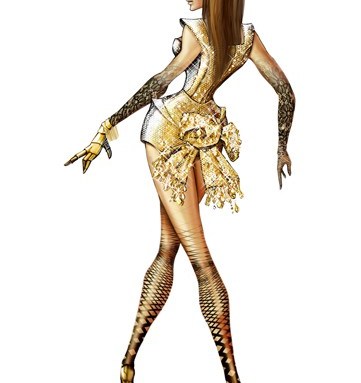 “The duality between being a woman and a warrior.”

That’s the spirit Thierry Mugler wanted to capture with the costumes he designed for Beyoncé’s upcoming world tour, and from the look of these illustrations, he succeeded. The tour kicks off today in Edmonton.

“Sasha Fierce is another aspect of Beyoncé’s personality,” Mugler offered via e-mail. “She is Fierce on stage and Beyoncé in real life. I tried to understand these two sides with my own perception of both aspects.”

The look pictured here captures that duality. It imagines Beyoncé as a tough, chic, superheroine type who likes her power glam with a bit of froth; hence, the bow bustle and mismatched gloves that pair lacy fishnet with articulated metal.

But don’t expect Beyoncé to stay in that guise for long. “There will be a lot of dramatization and metamorphosis on stage,” Mugler promised.

The designer said he and Beyoncé share “the sense of mise-en-scène.” As the tour’s creative adviser, he has worked on all of the show’s visual aspects — lights, sets, costumes — while “working hard to achieve her dreams. “He describes the costumes as “very elaborate,” and rooted in the songs’ meanings. “Feminine. Free. Warrior. Fierce. As a creative adviser for this tour, it is my responsibility to make her vision come true,” the designer said.