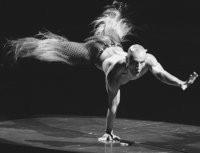 LOS ANGELES — Lest anyone need convincing that fashion has always been a circus by another name, Thierry Mugler got to underscore the point with the VIP-opening Thursday night of “Zumanity,” the latest — and most risqué — incarnation of the wildly popular and lucrative Cirque du Soleil franchise in Las Vegas.

“In ‘Zumanity,’ I am creator,” he declared by e-mail late Tuesday as he tried to recover from a summer cold brought on by the round-the-clock schedule he’s maintained for weeks in preparing for the $35 million spectacle. Opening to the masses Friday, the home of “Zumanity” is the 1,256-seat cabaret hall custom-built inside the New York-New York Hotel and Casino.

Without a house (owner Groupe Clarins shuttered the doors in early July), Mugler’s joining the Cirque seems a fitting next chapter for a man with a penchant for theatrics at a time when the fastest-growing city in the nation runs on an economy built on extreme fantasy. His past lives, of course, dabbled in everything from costuming Macbeth for “La Comedie Française” to directing music videos, to his own dance company (he was classically trained), Société Thierry Mugler, a decade before he became a household name for outfitting the iconic Eighties superwoman.

Love, not sex, might be the operative slogan in promoting a show selling love seats to pairs at $150 and $195 a pop. But it’s the physical sideshow of that most complex of human traits that the 50 performers play out — in Mugler-designed looks that push the boundaries of dress. Some are affixed with prosthetic genitalia, since even in Sin City, total, real nudity is still illegal.

Much has been made of the undressed effect of these characters, in fact, but Mugler observes that his designs are not so much “illusions, but sublimations.” And don’t call them mere costumes. Insists Mugler, “For Cirque, I am not doing costumes. It is more than that. I created the ‘characters.’”

A key character is the show’s MC, New York drag performer Joey Arias, a fixture in Mugler’s Paris runway shows, who connected his friend with Cirque director of creation Andrew Watson (there are at least four officially named as either creators or directors of the show). “I fell in love with the great personalities of the performers,” said Mugler, in explaining why he signed on to the project.

“Break the Cirque rules” served as Mugler’s mantra, as he aimed for “sophisticated and refined sexuality” in the 100 looks he created. Achieving this meant more than doubling his initial budget to $3.5 million. Once they were put to the test, Mugler found he needed to do “lots” of technical adaptations, thanks to hydraulics, stilts and other feats tested in the show.

The bulk of the wardrobe, not surprisingly, is heavy on fetish culture favorites: fishnet leggings, sheer corsetry, shiny second-skin vinyl trench coats, spikey cone bras and plenty of faux fur. The eye masks, the head dresses with their shock of brightly colored feathers and the sexy, over-the-top confections are very Vegas — and very Mugler.

With “Zumanity” under way, Mugler said his sights are on writing and directing a cabaret revue in New York, as well as a film, along with working on his photography books. And much has been made of Jessica Lange’s turn in the indie Bob Dylan-driven film, “Masked and Anonymous,” where even the stodgiest of critics made note of her character’s Mugler duds.

The house might be gone, but the Mugler show goes on.