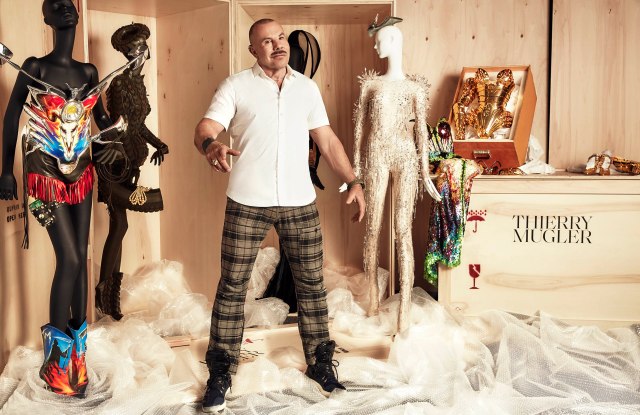 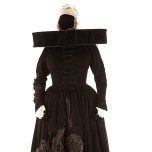 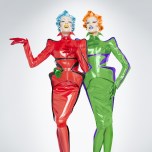 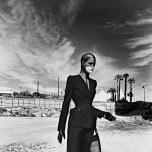 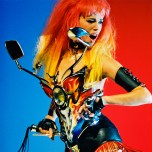 MONTREAL — A raw, biting gale blasts over the snow-covered streets outside of Montreal’s Museum of Fine Arts, where hundreds of people swaddled in parkas huddle expectantly for the arrival of the man for who helped define Eighties’ fashion, Thierry Mugler.

Ironically, it’s as though nature herself conspired to create the perfect entrance for the indomitable, sweeping force that is Mugler. Now 70, the French-born designer’s “my limit is no limits” credo propelled him to stardom four decades ago and took him — and all who would enter — into a fantastical universe filled with daring Space-Age vixens and erotically clothed superheroines who powered their way across the catwalk in their wasp-waisted garb and wide-padded shoulders.

Yet that heritage is still causing a stir as the elusive icon enters the building that will showcase the world premiere exhibition, which makes its debut to the public on March 2.

Indeed, walking past fans, the throng of media and into a private reception filled with Montreal’s fashion elite, Mugler’s smile is hard to miss this evening — even in the midst of this bubbling, blue-lit chamber.

“So many faces, so many dreams,” he said, standing there before the crowd with little more than his moustache, jeans and a simple beige shirt to adorn him.

“I try to see this promenade. This magic. The muses. But part of the magic with exceptional people is creating these unique personalities,” as Mugler described his body of work, which towers in this rare retrospective that features more than 140 pieces created between 1973 and 2001 — many of which have never been seen before in public.

Fans get a matchless opportunity to explore such treasures as Mugler’s emblematic 1992 video, “Too Funky,” that he created with British singer George Michael and his short films starring actresses Isabelle Huppert and Juliette Binoche.

Mugler’s dazzling costumes created for Cirque du Soleil’s 2003 “Zumanity” show and the Comédie Française’s 1985 production of Shakespeare’s “Macbeth” are also part of this jaw-dropping ode pulled together by “Couturissime” curator Thierry-Maxime Loriot, as are pieces the designer created for Beyoncé ‘s 2009 “I Am…” world tour, plus items worn by the likes of David Bowie, Lady Gaga, Diana Ross and many more.

“A man like Mugler is not a one-trick pony,” Loriot told WWD.

“What I wanted to showcase here was a collaboration and a celebration of his work, but also to remind audiences that Mugler belongs to a generation that is all about creation and freedom,” said Loriot, who also curated 2017’s hugely successful exhibition “Love Is Love: Wedding Bliss à la Jean Paul Gaultier.”

“Today there is a lot of censorship in some aspects of the fashion world, and like so many industries, it all comes down to how many ‘likes’ you’re going to get on social media — just like some kind of popularity contest. But Mugler never followed trends. He made them.”

The house of Mugler’s current creative director, Casey Cadwallader, could not agree more.

“I may have studied architecture, but Mr. Mugler’s work came to my attention when I was young and right away its vision and daring quality caught my eye,” Cadwallader said.

“This man had his dreams and built a fantasy world through his work. He pushed things, experimented and never feared about where all this ‘play’ might lead, which I found tremendously exciting. Sadly today that attitude is not often seen in fashion houses,” said Cadwallader.

Such fearlessness, however, was due much to Mugler’s extraordinary craftsmanship.

“With Mugler it’s all about how he used materials like metal, rubber, PVC and even insects to create this wild universe where his vision could come to life,” said Loriot, who met Mugler three years ago to begin their work on this show.

“Nothing was out of bounds for him and all these materials helped him to explore the culture of the moment and put his stamp on it,” he added.

Indeed, Cadwallader begins each season by pulling some of the extraordinary works from the designer’s 7,000-piece archive to better study his masterful execution.

“The photos that have survived of Mr. Mugler’s work from the Seventies, Eighties and Nineties are fuzzy, so you cannot fully appreciate how he cut, did his corsets or padded his work. The magnitude of that is lost until you see the work up close. That’s when you begin to understand how he innovated fashion and changed the way we look at it,” said Cadwallader.

According to Loriot, Mugler invented the contemporary silhouette and put the “new” into the New Look that hearkened back to Dior.

“Before Versace and the like, Mugler put Jerry Hall, Iman and other celebrities on the catwalk and transformed the idea of what haute couture shows could look like,” Loriot added.

Empowering women was also one of Mugler’s ultimate measures of success.

“Mr. Mugler’s work is filled with this all-embracing acceptance for women of all sizes and shapes, which he presented to the world in an incredible fashion that’s still relevant,” said Cadwallader. “When a woman put on one of Mr. Mugler’s creations, they felt confident. It made them more themselves,” he said.

That power is clearly evident the next day, when Mugler himself and Loriot opened the exhibition for an early preview.

“When I started with haute couture in 1992, it was different in that every piece was a story,” said Mugler, who highlighted the humor in his work.

“My sense of humor isn’t always perceived. People could not always understand it. They didn’t get it. But art really is something alive,” he added as he pointed to his head — home to what Mugler jokingly called “my magical box.”

“You have to refresh. You have to put technique and the pain into it. But it’s all linked by passion. You cannot achieve something mind-blowing without that,” said Mugler, who, when asked, revealed his next undertaking to WWD.

“I have the proposition to do something with the Bolshoi,” said Mugler, who smiles at the thought of tackling such an “amazing” feat.

That project should come to life over the next two years. Yet daring leaps like these are what Mugler craves.

“He constantly reinvented himself. He never created fashion just for the money. If people can take just one thing away from this exhibition, I hope it will be this one core belief the drove Mugler from the start: Be yourself and never look back.”