Gray suede boots, a hooded gown, a breezy caftan — why not? Here, a look back at the most famous serial bride’s serial style. 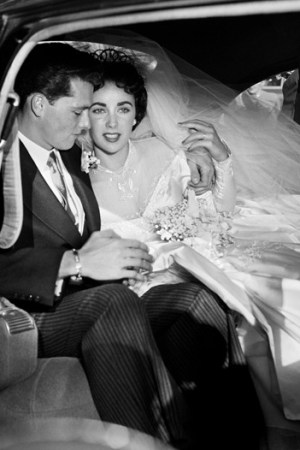 You wouldn’t expect the glamorous Elizabeth Taylor to wear gray suede boots at her wedding, but she did. Then again, after being married multiple times — six, at that point — she had license to experiment. A pair of boots, a hooded gown or a breezy caftan — why not? Here, a look at the most famous serial bride’s serial style.

This story first appeared in the April 28, 2011 issue of WWD. Subscribe Today.

Taylor went the traditional route for nuptial number one to the hotel heir: an embroidered white satin gown embellished with seed pearls and beads. It was a gift from MGM, with whom she had just wrapped up the film “Father of the Bride,” co-starring Spencer Tracy. Costume designer Helen Rose, who created Taylor’s gown for the movie, lent her services here, too. According to C. David Heymann in “Liz: An Intimate Biography of Elizabeth Taylor,” a new edition of which was released this week, that Rose-designed dress took 15 seamstresses and two weeks to make. Taylor paired it with a cream-colored tiara, 10 yards of veiling and — eschewing height for comfort — simple satin slippers. The marriage ended eight months later.

According to wedding expert and author Sharon Naylor, “the second wedding had to be played down tremendously in the Fifties.” That could explain the rather demure ensemble for Taylor’s sophomore turn at the altar — actually a 15-minute civil ceremony in London’s Caxton Hall. The actress wore a gray wool skirt suit with a white organdy collar and cuffs, also designed by Rose.

There was a reason why Taylor opted for a destination wedding in Acapulco: she was already two months pregnant with Todd’s child and needed a quickie Mexico divorce from Wilding. She got it, and two days later married Todd. Rose once again played couturier, whipping up a hooded gown for the bride, this time in blue. Eddie Fisher and Debbie Reynolds, who were married at the time, stood by the newlyweds’ sides as best man and matron of honor.

Taylor’s relationship with Fisher was riddled with controversy from the start. She was close friends with Reynolds. He was best friends with Todd. And when Todd died in 1958 in a plane crash — on his ill-named private plane “Lucky Liz” — Fisher gave Taylor a shoulder to cry on, and then some. Gossip columnist Hedda Hopper inflamed things further when she quoted the actress as saying, “Mike’s dead and I’m alive.…What do you expect me to do — sleep alone?” Shortly before the wedding, Taylor converted to Judaism and they were married at Temple Beth Shalom in Las Vegas. Fisher sported a white yarmulke and a blue suit while Taylor wore an elegant green chiffon gown by Jean Louis, with sheer long sleeves and a draped hood. Todd’s son from his first wife, Michael Todd Jr., served as best man. Taylor and Fisher divorced five years later.

For her next wedding, Taylor managed to up the ante on the scandal factor: She and Burton fell very publicly in love on the 1963 set of “Cleopatra,” while she was married to Fisher and he to former actress Sybil Williams. Even the Vatican weighed in, condemning the couple for “erotic vagrancy.” Still, they divorced their significant others and got married in a hotel suite at the Ritz-Carlton in Montreal. Costume designer Irene Sharaff, who dressed Taylor in her role as the Queen of Egypt, created an empire-waisted, golden-yellow gown for the five-time bride — which, Heymann writes, was a take on a dress she wore in an early scene with Burton in “Cleopatra.” At 10 years, this was Taylor’s longest marriage.

Sixteen months after divorcing, Taylor and Burton got hitched again. This time, the bride’s unorthodox nuptial wear — a long green caftan embellished with avian patterns — was all about locale: They decided to tie the knot again while in South Africa for a charity event. The ceremony took place on a riverbank in the Chobe Game Reserve in Botswana and was officiated by an African district commissioner from the Tswana tribe. Burton was as casually dressed as his wife: he wore white pants and a red turtleneck. The pair divorced, for good, less than a year later.

Ceremony seven was another outdoor affair, on a farm in Virginia to a politician; Warner was the former secretary of the Navy who would go on to become a U. S. senator. (The photos were never made public.) Taylor’s attire this go-around: a lavender-gray cashmere dress, matching coat trimmed in silver fox, lavender turban and gray suede boots. “By the time Taylor trudged up the hill at sunset, hours late, the area was covered by cow paddies and smelled like a dairy farm,” writes Heymann. “The Episcopal ceremony was performed by Rev. S. Nagle Morgan of Middleburg, Virginia. ‘Because of the cows,’ he said, ‘the guests had to step carefully to avoid their droppings.’”

After her 1982 divorce from Warner, Taylor took nearly a decade off before her next, and last, nuptials, this time to construction worker Fortensky — whom she met at the Betty Ford Center. The big blow-out wedding, which cost $1.5 million, was held at Michael Jackson’s Neverland Valley Ranch. The singer gave her away — marking the occasion by wearing, not one, but two black gloves. Fortensky donned a Versace tuxedo; Taylor, a meringue of a dress — pale yellow lace, tiered and with a scalloped hem — by Valentino. “I proposed two colors: blue-violet, like her eyes, or yellows for the dress,” Valentino told WWD before the wedding. “I had something slim and very sophisticated in mind, but she wanted something more joyous, more romantic.” Alas, their marriage was over in five years.