LOS ANGELES — As a surfwear designer, Lian Murray’s career has spun a 360.

The former creative director and partner at Hurley International has launched a line of sportswear and denim called Aqua VI, dubbing it “premium... 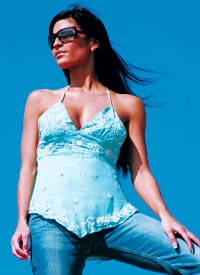 LOS ANGELES — As a surfwear designer, Lian Murray’s career has spun a 360.

“I didn’t think I’d be doing this again — I thought I’d retire and move to Hawaii — but I saw a void in the market,” she said.

That gap she sees — for trend-right, higher-quality product — is the one left between street-inspired brands such as Volcom and Stüssy and more core surf brands such as Hurley. Murray argued that an aging surfer may not want to always don that youthful Roxy T-shirt.

“If surf shops don’t donate floor space to the more premium sector, they stand to lose a generation of shoppers that’s growing up,” she said.

Stonewashed jersey knits, layered with inside printing and outside appliqués, flowy miniskirts with big satin ties and sandblasted denim indigo plaids with fleur-de-lis-carved rivets are key looks of the line. Partial to the palm tree and pineapple, Murray gives a halter top a fresh squeeze with a sewn-on juicy pineapple and accents a leather over-the-shoulder purse with brushed-gold pineapple rivets.

Aqua VI’s differentiating factor is its proprietary art, said Murray, who has scoured the Internet for artists. Currently, she’s working with London illustrator Adam Pointer, whose provocative themes, such as a silhouette of a topless girl holding a surfboard in vivid sunset hues, will adorn the line’s T-shirts. Williams also is tapping the ornate factor with the men’s jeans, walking shorts, woven shirts and Ts. For instance, denim pockets have leather trims and rhinestone studding.

Ranging from wholesale prices of $30 for a T-shirt to $70 for denim jeans, the line ships in March and will target both contemporary boutiques such as Kitson and Lisa Kline in Los Angeles, and directional surf stores such as Huntington Beach Surf and Sport, Zumiez in Everett, Wash., and Torrance, Calif.-based Becker Surf and Sport. First-year sales are expected to hit $6 million wholesale, and, if all goes well, Aqua VI could expand with hard goods, such as bedsheets, housewares, “glitter surfboards” and a Newport Beach store next year.

The challenge for most new active lifestyle brands is breaking into a market dominated by established players. But retailers champion Murray as one who has a Midas touch even if her upmarket approach isn’t entirely new. Quiksilver launched contemporary line Alex Goes in 2000 but shut it down a year later.

“I’ve always thought her no short of amazing,” said Dave Hollander, president of Becker Surf and Sport, which operates five Southern California units and a Web site. “I’d follow her anywhere, because you can trust her to be on it. The higher end is working with Quiksilver’s Silver Edition, and if the product is right, the value can be there for women’s.”

Murray is one of the few females who has ridden the wild wave of success in the industry for both young men’s and juniors’ clothing. Her designs — more fashion, more street, less surf — and innovations such as the Velcro-less flies for girl’s boardshorts and basketball influences gave latitude to other lines, including Split, to pursue a more edgy sensibility. After a stint as a boutique owner on Melrose Avenue, her career took off among the surf triumvirate as the head designer at, successively, Quiksilver, Billabong USA and Hurley International, where she also launched Hurley Girlie. Nike bought Hurley in 2002. She said she left Hurley last December to spend more time with her daughters, Taylor, 14, and Morgan, 11. She also chafed under pricing pressures at Hurley. In comparison with Aqua VI, wholesale prices at Hurley range from $10 to $30.

“I love Bob Hurley and I love the company, but I’m relentless and passionate about the look I want to achieve,” Murray said. “I really believe I can bring Ralph Lauren to the surf industry.”