NEW YORK — "I've just got time to kill," joked Alexander McQueen about working on the pre-spring collection that was shown to buyers last week. Actually, though the designer has done pre-spring since 2003, this is the first time he's shown it to... 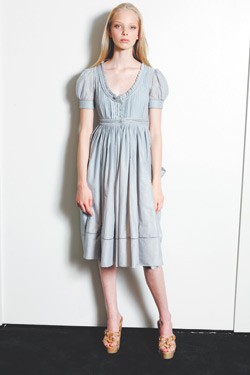 NEW YORK — “I’ve just got time to kill,” joked Alexander McQueen about working on the pre-spring collection that was shown to buyers last week. Actually, though the designer has done pre-spring since 2003, this is the first time he’s shown it to the press — an obvious nod to the importance of the season. To wit, this one brought in $6 million in sales last week — an increase of 55 percent from last pre-spring. It’s currently selling in Milan.

This collection’s inspiration is twofold: the glossy glamour of photographs by Guy Bourdin and Helmut Newton, and an assortment of stylish women from the Seventies and Eighties that includes former Mick Jagger wives (Jerry Hall and Bianca Jagger) and Woody Allen leading ladies (Diane Keaton and Mia Farrow.) “I’ve just got a bit of disco in my feet at the moment,” said McQueen. “It’s kind of kitsch in a way, kind of Studio 54.”

Kitsch, perhaps, but the designer’s mixed bag of muses makes for a lot of stylish diversity, including an extensive accessories collection with wooden platform sandals, a few colorful new styles of handbags and several variations on the Novak bag. As for the clothes, a gamine Farrow could wear McQueen’s girlish, pintucked Empire-waist dress with puffed sleeves, while Hall might choose his sexy, stiff pink satin cocktail dress with a sweetheart neckline. Jagger and Keaton, though, would likely gravitate toward the tailored pantsuits: a seductively androgynous white tuxedo for the former and a checked wool waistcoat with wide-legged trousers for the latter.