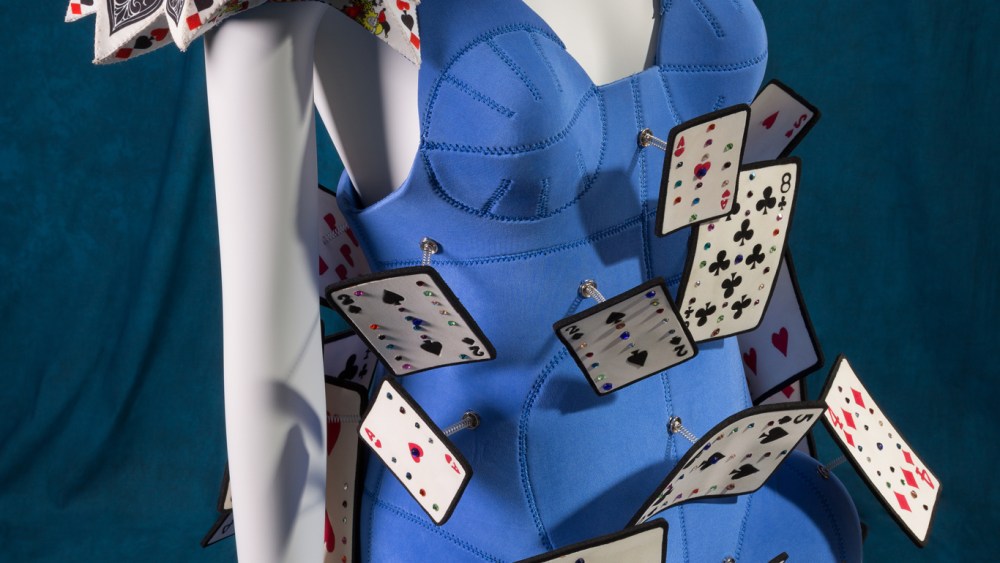 Designers’ interpretations of Cinderella’s glass slippers, Little Red Riding Hood’s red woolen cloak, Snow White in a black gown and The Little Mermaid’s fishtail skirt are among the looks that will be highlighted at the “Fairy Tale Fashion” exhibition at The Museum at the Fashion Institute of Technology Jan. 15 to April 16.

“I got a lot of cooperation from the designers. For the most part, the contemporary pieces I requested from the designers haven’t directly been inspired by fairy-tales. It’s really me going through the old translations of the literary fairy-tales and seeing what these descriptions of really opulent or important clothing were, and then going to the designers and saying, ‘I think this fantastic dress from this season would work to illustrate this moment,'” Hill said.

“I’ve had to explain a little bit why these pieces work for certain tales, and I’ve gotten a very positive response,” she added.

The exhibition begins with artwork that has played a role in shaping perceptions of the fairy-tale aesthetic. There are illustrations by early 20th century artists such as Edmund Dulac, Arthur Rackham and A.H. Watson. Several recent, large-scale photographs from Kirsty Mitchell’s award-winning, “Wonderland” series will also be displayed.

Visitors will first walk into the forest, which includes the tales “Little Red Riding Hood,” “Snow White,” “The Fairies,” “Rapunzel” and “Snow-White and Rose-Red.” Several variations of Little Red Riding Hood’s red cloak will be displayed, starting with a woolen cloak from the late 18th century, and ending with a fall 2014 Comme des Garçons ensemble with an enormous, peaked hood in scarlet patent leather. Inspired by the fairy-tale-themed fall 2014 presentation by Alice + Olivia designer Stacey Bendet, Snow White is portrayed wearing a black organza gown encrusted with rhinestones while lying in her glass coffin. The “Rapunzel” subsection features a dress from Alexander McQueen’s fall 2007 collection, made from deep emerald velvet embellished with copper-colored beads that create a motif of cascading hair.

The center of the gallery will be dominated by a large castle, in and around which the tales “Cinderella,” “Furrypelts,” “The Snow Queen,” “Beauty and the Beast,” and “Sleeping Beauty” is displayed. Cinderella, for example, is initially shown in her rags, exemplified by a Giorgio di Sant’Angelo ensemble with a skirt made from shredded chiffon (1971). Cinderella’s glass slippers are represented by a pair of 2014 heel-less shoes by Noritaka Tatehana, 3-D printed in clear acrylic and faceted to reflect light. “The Snow Queen” is captured by an opulent hooded fur cape by J.Mendel (2011).

In the sea section of the exhibit, “The Little Mermaid” and “The Swan Maidens” are explored. Charles James’ Swan dress, from the mid-Fifties, has a full skirt made from alternating layers of black, beige and brown. “The Little Mermaid” is represented by several mermaid-inspired gowns, including Thierry Mugler’s 1987 bustier and fishtail skirt in metallic lilac fabric. There’s also an elaborately crafted dress embellished with pearls, sequins, feathers and Swarovski crystals from the spring 2015 Rodarte collection.

In another section called parallel worlds, “Alice in Wonderland” and “The Wizard of Oz” get their due. “The Wizard of Oz” spotlights Dorothy Gale’s blue-and-white gingham frock, and is represented by a checked cotton dress from the early Forties by costume designer Adrian. A pair of bright red, crystal-encrusted stilettos by Christian Louboutin is evocative of Dorothy’s iconic footwear.

“In spite of the fact that clothing often plays such an important role in fairy-tales, it’s not something that’s really been explored in a scholarly way to any great extent,” Hill said.