Organizers of several international textile fairs scheduled to kick off here next week have momentum on their side. 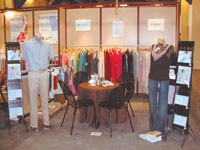 NEW YORK — Organizers of several international textile fairs scheduled to kick off here next week have momentum on their side.

The allure of the U.S. market and the chance to land even one recognizable brand, retailer or designer as a customer has pushed the shows to the limits of their capacity months ahead of time. However, this growth has allowed two new shows to be added to the roster within the last year, bringing the issue of competition to the forefront.

European textile manufacturers, in particular, have been feeling the pinch of competition from Asia for several years. Daniel Faure, president of Première Vision, which produces Première Vision Preview, said the show was one of the first to give U.S. customers an early read on trends. The first show, then called European Preview, was launched seven years ago.

“From the beginning, it was quite successful,” Faure said. “Even if most of the collections were not set up at that time of the year, the customers and designers in New York understood perfectly what was the style and that they could get the first real and complete information on the season.”

Although the focus on trends continues, European mills also have been forced to present themselves as capable of delivering high-quality goods at competitive prices. The show’s format has not changed drastically, but as it heads into its 14th edition next week, Faure acknowledged that the pressures on exhibitors keep mounting.

“The problem is the same, to be able to deliver shortly and with a perfect quality anywhere in the world with a reasonable price,” he said. “What everybody would like to have is creativity and quality, but with a Chinese price. But that’s terribly difficult.”

Concerns over the viability and sustainability of the European textile industry were heightened heading into 2005, when global quotas on textiles and apparels were eliminated. Quality issues with Asian mills have brought back customers, but Faure contends that some European mills are “still afraid.” That said, the relationship and cooperation between buyers and suppliers has continued to progress, helped in large part by advances in technology.

Première Vision will convene Jan. 24 to 25 at the Metropolitan Pavilion on 18th Street here.

This story first appeared in the January 16, 2007 issue of WWD. Subscribe Today.

Lenzing Fibers started its Innovation Asia show in 2001 with 13 mills exhibiting in the upper floor of a midtown restaurant.

“Maybe we had 250 or 300 people come,” said Tricia Carey, merchandising manager for Lenzing. “We had to rush out and print more directory books because we didn’t know how many people to expect.”

In July, Lenzing partnered with Messe Frankfurt for the debut of Texworld USA. The two shows share space at the Penn Plaza Pavilion. Carey said Innovation Asia drew more than 20 mills and about 850 visitors during the last show. She has witnessed the increased interest from Asian mills since the first edition.

“When I started with Lenzing, we had a dozen Asian suppliers, and now we have so many,” Carey said. “They’re more aggressive in knowing the players in New York, as well. They understand that the decision is made here and then followed through in Asia, so this gives them exposure.”

Carey believes the challenges Asian mills face are much the same as those from other areas of the world.

“The fabric buyers are savvy as to how they can source and get the best value for their customer,” she said. “The price of clothing goes up, but the price people are willing to pay for fabric goes down.”

Carey acknowledged that communication and follow-up on leads is a problem for some of the Asian mills. Also, because many don’t have agents based in the U.S. they don’t have a thorough understanding of the market.

“In some cases, the mills need to know more brands,” Carey said. “They know the big ones, but they need to realize there are a lot more between them.”

The Texworld USA show was nearly sold out by early December, with almost 160 exhibitors and more than 1,900 visitors expected to attend. The show’s second edition will take place at the Penn Plaza Pavilion Jan. 23 to 25.

The Turkish Fashion Fabric Exhibition will host its 11th edition Jan. 23 to 24 at the Grand Hyatt New York and is expected to have more than 30 exhibitors showing.