Mass market retailers attending the NACDS Marketplace said they are tearing up cosmetics walls and beefing up HBA aisles to build a new look. 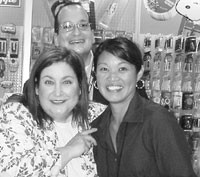 Not satisfied with the status quo, mass market retailers attending the National Association of Chain Drug Store’s Marketplace Meeting here said they are tearing up cosmetics walls and beefing up HBA aisles to build a new look. The new departments will bow in 2005.

And it’s about time.

Mass market beauty sales were expected to climb about 4 percent since the start of 2004; that sales spurt hasn’t yet occurred. Many of the beauty manufacturers and retailers attending the four-day show wonder if the economy has finally gotten the best of the beauty category. The theory that even in hard times women will buy a new lipstick is weakening in the face of escalating cost of living necessities — especially the price of a gallon of gas.

Chains such as CVS and Target have already started on fresh beauty looks. CVS has added products from Boots to some stores, in addition to its exclusive Lumene brand. The chain has also given the nod to niche marketers such as Styli-Style and Vichy.

In the months following Marketplace, other mass powers including Rite Aid, Longs and Walgreens are planning on reallocating space. In many cases, the editing pencil is being used to cut space from major beauty firms that are not productive. “Some of the big guys have too much space,” said a source at a top drugstore chain. Other established suppliers, such as Caboodles and Jane, have recently undergone management and product changes and face eviction unless sales turn around. Executives from these companies were out in full force on the trade show floor showing buyers what they are doing to turn the tide.

According to one manufacturer, the industry will surely see a phaseout of stockkeeping units from underperforming brands, such as Coty’s Healing Beauty, and the phaseout of teen and value brands will continue in 2005, as the line between the two remains blurred. “When you have a wall with NYC, Healing Beauty, Jane, Wet n’ Wild and now Rimmel, it’s an overrepresentation of budget so retailers are cleaning up the wall even further,” the supplier said.

And promotional products, such as candy brands, have not been as strong for some mass retailers as they have been for specialty chains such as Claire’s.

With that as a backdrop, executives at emerging brands such as Coty’s Rimmel, Jordana’s Milani, Markwins’ Victoria Jackson, Smart Brands’ Tru and Prestige Cosmetics did their best to wow buyers with new products. Buyers also said they want more space for upscale skin care, such as for microdermabrasion kits, said Kathy Steirly, vice president, beauty care merchandising, for Eckerd. L’Oréal Dermo-Expertise’s new Refinish Micro-Dermabrasion Kit for $24.99 is set to lead the pack.

Up-and-coming brands got their “eight minutes of fame,” as it was dubbed, during prearranged Meet the Market meetings preceding the official kickoff on the trade show floor. This was the second year NACDS offered this format, which allowed retailers to attend the meeting for free providing they meet one-on-one with participating suppliers. The informal gatherings alleviate the fear that small suppliers will fade in relevance on the massive trade show floor.

Retailers said the chats were more productive this year than last year thanks to a better matchup of buyer with supplier. Last year some cosmetics buyers met with people representing categories outside of their jurisdiction.

“We were definitely matched up better this year and I did see a few clever ideas such as gloves you can wear overnight with moisturizer to soften your hands,” said Valerie Cheyney, cosmetics and health and beauty care buyer for Happy Harry’s, based in Newark, Del.

There were 12,000 eight-minute meetings over the course of two days, an increase of 10,000 from last year. “The turnout is very good,” noted Cheryl Mahoney, vice president of beauty care for CVS.

But there were buyers lamenting the bustling schedule built upon an already jam-packed show. “I started this morning at 7:30 and I’ll be going on the floor until 5:30,” said one leading drugstore chain buyer.

The Meet the Market chats enabled companies such as specialty store brand Dessert to get acquainted with mass retailers. “This is an exploratory show for us,” said Alexandra Zanella, vice president of sales for the company, which has Jessica Simpson as a spokesperson. With a fragrance priced at $45 and a lip gloss at $21, the Dessert line is a little pricier than traditional drugstore fare.

However, a team of Teen People Trendspotters sent a message of welcome to the line by naming it “most buzz-worthy” at the entire show. Teens also gave a nod to Lotta Luv’s Snapple lip juice, Neutrogena Super Moist Leave in Foam for hair and Noxzema Biking Razors.

But while teen consumer favorites and new products (see related story 9) may help retailers fill the holes left by weaker players, Ingrid Jackel-Markens, senior vice president of marketing at Physicians Formula, said that the slowdown of consumption is probably because the industry is not exploding more.

“It is our responsibility as manufacturers to make the fun in shopping what it is used to be.” She expects next year’s beauty arena to be different. “With the changing political environment, instead of becoming stressed by the speed of change women will use the energy and movement of change and we’ll see that in their consumer and purchase behavior.”

— With contributions from Andrea Nagel