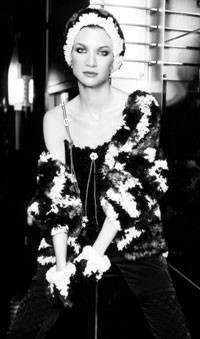 MONTREAL — The North American Fur and Fashion Exhibition, held here each May, has undergone a gradual evolution over its 21-year existence.

The show has been attracting more upscale exhibitors and buyers, according to Alan Herscovici, executive vice president of the Fur Council of Canada, which produces NAFFEM in conjunction with the Canadian Fur Trade Development Institute. In fact, it now carries the subheading The Luxury Outerwear Show. The next edition is set for May 2-5 at Place Bonaventure.

“We’re beginning to reach a wider audience and we’ve added other winter outerwear like leather and accessories,” Herscovici said. “At the last show in May, 43 percent of the exhibitors were primarily fur collections, including smaller pieces and vests. Another 30 percent were other types like shearlings, leathers and fur trim, and 11 percent were showing accessories. The remaining 16 percent of exhibitors were fur pelts, and other products and services.”

That’s where the luxury tag comes in. Herscovici said that’s what the show has become. He works with a staff of about 10 at the council office and an annual budget of $720,000.

“The message we want to get out is that NAFFEM is no longer just a fur coat show and it’s not just a show for Canadian buyers,” he said.

That message was reflected at last year’s show, which featured more fur and fabric combinations and fur accessories than previous editions.

Now that NAFFEM is no longer uniquely a fur exhibition, show manager Lena Romano has been marketing NAFFEM more aggressively to other organizations. She successfully convinced DLS Outfitters of New York to attend the last show. DLS is a consultant to about 120 independent U.S. retailers.

“I had no idea how different and diverse the fur market has become,” said DLS president Frederick Derring. “There was lots of interesting stuff and we will definitely get more stores to attend next year.”

Derring thinks most of his clients would be more interested in getting involved in trunk shows rather than setting up fur departments in their respective stores.

“I can also see some of the stores buying fashion items rather than carrying a full line,” Derring said.

A lot of high-end fashion boutiques that sell fur don’t know much about it and can learn a lot about the product at the show, said Herscovici. “In addition, a lot of exhibitors are doing more business with boutiques than in past years, particularly boutiques in hotels and ski resorts.”

One of NAFFEM’s main initiatives is to build its exhibition base to broaden its appeal with a wider range of products, particularly accessories such as silk scarves and jewelry.

“We want to attract more high-end boutiques looking to expand their product range,” said Herscovici. “We also want to attract the guy from, say, Las Vegas, to show his exclusive leather garments.”

NAFFEM has been working with French fashion consultant Richard H. for a number of years. Richard H. also works as the artistic director of the Salon Prêt-à-Porter in Paris.

“We brought him in to look at fur apparel because he predicted a few years ago that fur would become a major trend and would be sold in nonfur stores,” Herscovici said.

Four years ago, Richard H. also helped to develop FurWorks Canada, a new style of fur that is sportier looking, lighter and easier to wear than traditional furs created by top Canadian fur designers. For the first time, this year’s Fur Works collection was featured at the Prêt-à-Porter show.

“To survive as a sector, we must find new fashion niches and trends,” Herscovici said. “At NAFFEM, Richard will add more excitement with new types of presentations and communications.”

Another initiative, also launched four years ago, is the Design Network, a collaboration with Saga Furs of Scandinavia. The objective is to invite Canada’s leading fashion designers to create collections incorporating fur.

Each year, five designers spend a week at the Saga design center outside Copenhagen to learn how to work with fur provided by the fur council. The designers produce a mini collection that is shown at different venues, such as the Montreal and Toronto fashion weeks, in China and Russia, and at the NAFFEM gala. Saga’s similar efforts with American designers have been successful.

“The objective is to encourage and stimulate innovation to broaden the market beyond the traditional fur coat and main fur manufacturing centers,” explained Herscovici. “Everybody buys the same furs at the same price. To be competitive with Oriental labor rates, we have to offer something different, and more innovative and more unique pieces.”

It also allows ready-to-wear designers to offer value-added products with fur accessories. All these initiatives are helping to make fur more of an everyday item with a wider range of products and treatments, including knitted furs that have been created by designers like Paula Lishman.

“As a result, there are more boutique owners attending the show, which gives us more confidence to get the word out to boutiques that the show is worth attending,” said Herscovici. “We’re also looking to add more European exhibitors to allow more boutique buyers to offer more European collections. The European boutique market is way ahead of North America in terms of knowing the importance of fur and fur accessories to grow their business.”