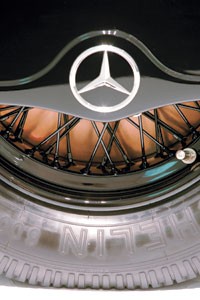 Name-dropping is just part of the game in pop music, particularly hip-hop. Agenda Inc.’s annual “American Brandstand” study reveals which brands are the most mentioned each year, by analyzing songs from Billboard’s Top 20. “In many cases, being mentioned is a reward for strong sales and a strong relevant brand strategy,” said Lucian James, founder and president of Agenda Inc. Though only two apparel and fashion brands appeared in the top 10, artists aren’t ignoring the fashion world. “The Black Eyed Peas and Gwen Stefani are Billboard chart toppers who brought fashion brands into the spotlight in 2005,” said James. Stefani’s hit, “Rich Girl,” mentions names such as John Galliano and Vivienne Westwood, while Black Eyed Peas’ “My Humps” included brands such as Donna Karan and Fendi, among others.

Mercedes-Benz nabbed the top spot thanks to artists like Ciara, whose hit “Goodies” featured the lyrics, “Just because you drive a Benz/I’m not going home with you.” Kanye West’s “Gold Digger” (featuring Academy Award winner Jamie Foxx) also propelled the luxury car maker into the spotlight. The German-based company began the year with sluggish sales but made a comeback, mainly because of higher demand for both its B (hatchback) and M (SUV) class models. Agenda Inc.’s James also noted the company has been taking a more fashion-forward approach in its advertising the past year. “Luxury car brands should always be trendy, but they also need to balance that with reflecting their heritage.”

This was an impressive year for Nike, not only in the hip-hop world, but also financially, as the Beaverton, Ore.-based company’s sales for fiscal 2004 were up 11.9 percent, to $13.7 billion. Nike also climbed from 11th place in Brandstand’s rankings last year, when it captured just 24 mentions. “Over the past year, there’s been an increasing enthusiasm for old-school hip-hop,” James said. “And Nike’s Air Force Ones, for example, still carry a heritage that people really love.” Ludacris gave mention to Nike in “Number One Spot,” by stating, “It’s a celebration and everyone should invite me/Roll with the crew or meet the bottom of our Nikes (blaow!).”

Cadillac has witnessed a revival over the past couple of years, thanks in part to the marketing of its Escalade. “Cadillac has been smart about connecting

to its core hip-hop audience,” said James. He pointed out that the company recently invited a number of hip-hop celebrities to offer their early input on the newly released 2007 Escalade. “The urban audience is a huge part of the population, and the company has been working to stay connected to that audience. Cadillac is realizing how pop culture relevance is a key part of its own marketing strategy,” James said. Cadillac received a mention in “Soldier,” the hit from Destiny’s Child: “We like them boys that be in them ‘Lacs leanin’ (leanin’)/Open they mouth, they grill gleamin’ (gleamin’)….”

Bentley has been working to expand its brand as of late, first with the launch of the Continental GT, and then with the Flying Spur. Bentley also announced last September that it will build a convertible version of its Continental GT, called the Continental GTC. But perhaps what helped heighten its brand recognition last year was its connection to none other than Paris Hilton: The scantily-clad socialite turned heads in the now-infamous Carl’s Jr. commercial, where she soaped up a Bentley while chomping on a Carl’s Jr. burger. In 50 Cent’s version of “Disco Inferno,” he boasts, “Homie you can catch me swoopin’/Bentley coupe and switchin’ lanes.”

The nearly 100-year-old brand had its popular Phantom Rolls-Royce featured by Snoop Dogg and Pharrell in their hit, “Drop It Like It’s Hot”: “The Phantom, exterior like fish eggs/interior like suicide wrist red…” Brandstand’s report makes mention that, like Bentley, Rolls-Royce is an “old money” brand that has been updated with a redesign that enhances its reputation as a luxury automobile – an ideal formula for hip-hop success. “Hip-hop reinvents itself every few years,” said James. “There is this part of the culture that has transformed from less ostentatious and showy to more old money, connoisseur brands – this definitely includes Rolls-Royce.”

Hennessy cognac has been a staple brand for hip-hop lyrics stemming back to the days of Tupac, and the brand shows no sign of losing speed, despite the fast-moving pace of hip-hop culture. Hennessy considers itself a “cult brand,” having achieved icon status, reaching across all different types of cultures, without losing its upscale, luxurious appeal. Recent advertising campaigns for the brand have featured African-Americans, such as Pam Grier, with a tag line reading, “Never Blend In.” Hennessy was represented by artists this past year such as Three 6 Mafia, whose 2005 hit states: “We must represent the Tennessee/We drink a whole lot of Hennessy.”

All eyes were on the Chevy Impala in 2005. The combination of the retro appeal of the Impala brand, matched with an updated design, has created a new desire for the brand. Brandstand’s report further noted that the Impala was the fourth-best-selling car in the country last year, and it looks set to

be just as in-demand during 2006. Rumors are also circulating within the auto industry that Chevrolet will unveil a concept at the North American International Auto Show this month that points to the return of the famous Camaro nameplate. The Impala worked its way into The Game and 50 Cent’s “How We Do” last year, with the lyrics: “Fresh like, uhhh; Impala, uhhh/Chrome hydraulics, 808 drums….”

With its new 18,000-square-foot China World flagship, an advertising campaign with model Gisele Bündchen and impressive sales performance over the past year, Louis Vuitton continues to secure its position as one of the most successful luxury brands in the world. The brand has also been able to connect its luxury status to hip-hop culture: Proof of that comes from its rapid move up the Brandstand charts (last year, the brand sat in 60th, with only six mentions). The brand received a lyrical mention from Mariah Carey, who sang in “Shake it Off”: “So I packed up my Louis Vuitton/Jumped in your ride and took off. You’ll never ever find a girl/Who loves you more than me.”

Originally created in 1876 for Tsar Alexander II of Russia, Cristal has also held the distinction of being the best-known champagne brand in hip-hop for years. But it has been facing growing competition from both Dom Pérignon and Moët et Chandon in 2005, according to the Brandstand report. Trick Daddy’s “Let’s Go” (featuring Lil’ Jon and Twista) featured the lyrics: “I’m telling you Trick of in and still ’em/Got me swingin’ Crysie and Hennessy bottles in the club with my thug homies….”

Perhaps it isn’t the brand of choice when many think of luxury, but the AK-47 has certainly been popular in rap lyrics, since at least as far back as NWA’s “Straight Outta Compton,” released in the late Eighties. Hip-hop has toyed with images of violence over the years, and the recent release of 50 Cent’s movie, “Get Rich or Die Trying,” brings the issue of violence right into focus for the hip-hop culture. Trick Daddy, Snoop Dogg (shown at left) and T.I. are just a few names who packed some AK-47 heat into their lyrics last year. T.I. mentioned the brand in “Bring ‘Em Out,” by singing: “Work well wit Nines, AK’s and Techs/And quick to check a lame like a game of chess/You want beef you can bring ya best and we’ll be standin’….”