When it comes to designer brand names, it's all in the bag. 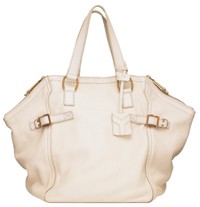 PARIS — When it comes to designer brand names, it’s all in the bag.

Creating a catchy moniker for a new handbag silhouette has become an important tool to help boost sales.

“Bag names originally served a functional [merchandising] purpose, but today they’ve been appropriated by the fashion system and are a sure way of putting a bag in the running to become the season’s ‘It’ bag,” said Laura Davidson, accessories buyer for Selfridges in London.

Bags carrying names are the store’s bestsellers, she said. A snappy bag name is easier to cite in the press and has sometimes become a status symbol when women are asked what bag they’re carrying. Although certain houses stick to a pattern, like Chloé, which tends to operate on a first-name basis and whose latest additions for spring 2007 include the Ava and Lou bags, the nature of most designations has evolved.

“A couple of seasons ago, a lot of brands adopted women’s names, such as Mulberry’s Roxanne, that made customers adopt a best-friend relationship with their bags. Today there’s a new wave of names with attitude that are often more related to a bag’s physique,” Davidson said, citing Fendi’s Spy and Chloé’s Paddington. “The Spy bag has secret pockets, so the name links to the bag’s physical qualities. And the whole story makes customers feel they’re getting more for their money.”

John Galliano said a name allows a bag to assume a personality and life of its own. Christian Dior’s Gaucho, which has been carried over to the house’s cruise line, exemplifies his point.

“The bag is so named after the gaucho who showed us his treasured beaten saddle on a research trip to South America,” Galliano said. “It captures the moment. The bag and name hang together and cannot be parted.”

At Yves Saint Laurent, the house followed a similar approach. One handbag from its military-inspired cruise collection has been baptized Downtown.

Tomas Maier, Bottega Veneta’s creative director, said a client will remember the name of a bag, especially as it gains credibility over time. He cited label mainstays such as the Cabat and the Veneta, which change the type of skin they are designed in, but not their names, each season.

Lasting proof of the potential selling power of a bag’s tag can be traced to 1956, when Princess Grace of Monaco, the former actress Grace Kelly, was photographed shielding her bump — containing Princess Caroline — with a glossy brown Hermès bag then named Petit Sac Haut Pour Dame, or the High Lady’s Handbag. Its creator, Robert Dumas, promptly renamed it the Kelly, sparking unprecedented demand.

“It was the first time that a bag name became a brand in itself,” said Guillaume De Seynes, Dumas’ grandson and executive vice president of Hermès.

The phenomenon has trickled over into contemporary brands.

“Our multipocketed bag became known as the Sofia, after Sofia Coppola, who was in the campaign,” said a spokeswoman for Marc Jacobs, adding the “It” factor of her name helped propel sales.

“The association of a bag name with an actress strongly contributes to its sales,” said Catherine Newey, accessories and luxury market director for Paris’ Printemps department store, adding that the connection mirrors the rash of fashion houses using actresses to endorse their products. “Charlotte Gainsbourg has a highbrow, artsy image, so linking her name to a bag is a subliminal way of associating the bag with those properties.”

Coming up with the perfect name is not always a smooth ride.

“A name only works if both the mother and father — or the creative and the marketing teams — are happy,” said Sophie Brocart, director of marketing for Celine’s accessories department.

Brocart cited the story behind the brand’s iconic Boogie bag, christened in 2002 by Michael Kors when he was creative director.

“Kors was looking for a link between American sportswear and French couture,” she said.

The Boogie, an American dance imported after World War II, fit the bill.

“It was perfect for evoking a Franco-American marriage,” she said.

While Brocart recalls when Madame Celine would casually name a bag, like one roomy shopper she affectionately termed the Leek & Potatoes bag, another challenge in the current handbag market is checking that names aren’t already copyrighted.

“A number of times I’ve waded through lists only to come across the name we’ve chosen that’s already taken,” said Brocart. “It’s always such a heart-in-your-mouth moment.”

Recent Celine names have shifted to influences from designer Ivana Omazic’s homeland, such as fall’s Pag bag, named after a town in Croatia.

Sylvia Venturini Fendi, the creator of cult bags such as the Spy and the Baguette, finds naming the most amusing part of the creative process. She added, however, that in the end the most important emphasis is on the merits of the style.

“Giving a name to bags is very feminine and cute, and should evoke curiosity,” said Fendi, who has christened her latest creation the Fendi Palazzo. “However, a bag name is nothing without good ideas.”

“I can’t stress enough that what a designer calls the bag doesn’t make it any better,” she said. “It first has to be a great bag in style, quality and function to make it truly successful. A name is definitely important, but let’s not discount the bags that have no name recognition and offer ‘where-did-you-get-that’ or ‘whose-bag-is-that’ appeal.”