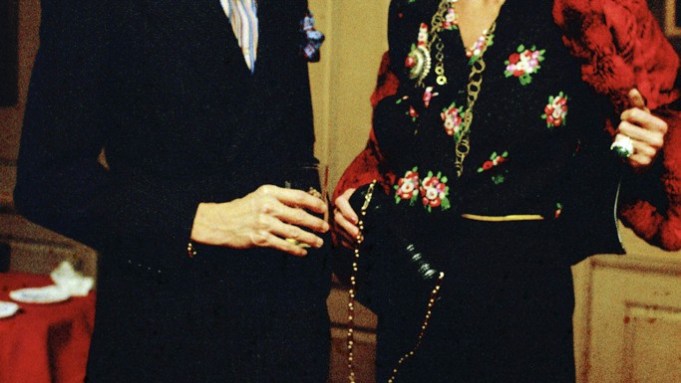 Nan Kempner didn’t just have a way with clothes — she also had one with words. She was known for her wry, pithy and illuminating observations on style. Here, a selection.

“I tell people all the time I want to be buried naked, because there must be a store where I’m going.” — WWD, 1972

“There’s no question Yves Saint Laurent is my favorite designer. Because I am tall and on the smallish side, clothes can overpower me. But Yves understands my kind of body. Actually, he designs for someone who is built like him.” — WWD, 1972

“I always wear sportswear for day — sweaters, skirts and pants. I’m very much a pants girl. At night, I switch to suits like Adolfo’s metallic Chanel-looking suit, or Halston’s long cashmere dress.” — WWD, 1972

RELATED STORY: Kempners Keeping Fashion All in the Family >>

“There are many things more important than clothes, but few things you do more than dress and undress.” — W, 1974

“I love changing clothes, even if we’re at home. My white Moroccan man’s shirt and black caftan from Fernando Sanchez is my favorite look for at home.” — W, 1974

“I like simple shapes, which I buy over and over again. I visualize an entire outfit and buy, often adding to things I’ve owned for years, with the total look in mind. I like tailored looks, nothing fussy like ruffles. I would always rather be underdressed than overdone.” — W, 1974

“Fashion is an art. When you look at paintings in museums, you see a reflection of how women dressed in certain eras. A designer is as much of an artist as an author, painter or architect. Fashion design is, after all, architecture for the body. Look at the work of Grès, Chanel, Poiret, Balenciaga, Saint Laurent.” — W, 1974

“I think clothes must be as pretty inside as they are out. I look for good fabric and good workmanship. I see if clothes are well-cut and well-made; that’s why I support the couture. If something is trendy and badly made, it won’t last.” — WWD, 1974

“I can remember my grandmother having a lady come from Paris every year with trunks of clothes, and she would order things for me.” — WWD, 1972

“This was fashion week with a capital ‘F.’ I show up at everything, because it becomes ‘I’ll scratch your back if you’ll scratch mine.’ I really have lots of fun, although my friends say I can have fun at the opening of a gas station.” — WWD, 1980

On buying her first Saint Laurent design, a white satin sheath and matching jacket, when he was at Dior: “I wanted that outfit very badly, but my mother-in-law stated I couldn’t afford it. I must say that I cried so much that they brought him downstairs to meet me.” The price was reduced to a sum within her budget. — WWD, 1998

“The wonderful thing about grandchildren is that if you get bored with them, you can send them home.” — The Observer, 2001

“I think that when you accept an invitation, you’re taking on a commitment. You’ve got to be just as attractive as you know how to be — because you’re not just another face or pair of legs. You’re there to help the gang get cracking.” — The Observer, 2001

“I love costume! Any time I can get into costume! Tommy Kempner thinks that I get into costume every day. Particularly when I was working for Harper’s Bazaar back in the late Sixties, early Seventies, he would look at me and say, ‘Who are we today? Nanook of the North? Pocahontas?’ I mean, the outfits!’’ — The Observer, 2001

“[Saint Laurent] taught me a very important thing: All a woman needs is a good trenchcoat, a pair of black pants, a long black skirt, a short black skirt and lots of tops.” — nymag.com, 2004

On the new social guard: “I’m sure we can turn over the reins of the benefits to these bright young things. It’s called evolution.” — nymag.com, 2004

Advice to aspiring “It” girls: “When you’re trying on clothes, look at yourself sitting down and look at your reflection from the back side.” — nymag.com, 2004

On how she fills out customs forms: “I’m not rich enough to be a real philanthropist. And I loathe being called a socialite. So I write ‘housewife.’” — nymag.com, 2004