NEW YORK — When it comes to his male artists, Damon Dash, chief executive officer and founder of Roc-a-Fella Records and the urban apparel line Rocawear, can handle giving fashion advice. Female artists, it turns out, are another... 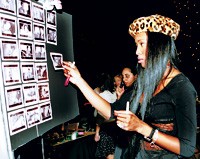 NEW YORK — When it comes to his male artists, Damon Dash, chief executive officer and founder of Roc-a-Fella Records and the urban apparel line Rocawear, can handle giving fashion advice. Female artists, it turns out, are another story.

So who does Dash turn to when one of his artists needs some fashion advice?

None other than Naomi Campbell, who he enlisted to help style and visualize the video for Roc-a-Fella’s latest artist, Nicole Wray, not to mention lend some of her invaluable fashion advice to Wray for events post-shoot.

“There are a lot of things to concern yourself with when it comes to women,” Dash said from Stage B at Silvercup Studios in Long Island City, Queens. “You’ve got to consider things like hair, makeup and time of the month.”

Dash arrived midafternoon with a posse for the daylong music video shoot for Wray, an R&B singer from California. “I sing about things I’ve gone through,” Wray said. The video was for her new single, “If I Was Your Girlfriend.”

“Naomi is a very good friend of mine,” Dash said, as the crew tried to quiet the hangers-on for another take. “Whenever I need any advice about female fashion, I ask her. She’s the very best.”

Cameras began to roll, and Wray took to the stage for the umpteenth time while her mother looked on. Campbell, dressed in a black long-sleeved minidress with leopard-print boots and matching leopard-print beret, checked out the storyboard, fiddled with her Blackberry and eyed Wray’s outfits. Campbell took on the project as part of her marketing company, NC Connect.

“It’s just another challenge,” the supermodel said effortlessly. When the cameras stopped rolling, Wray waited for instructions from the director, Darren Grant, and Campbell retreated to a dressing room to have her hair styled. Extras and dancers sat around eating pizza and drinking soda, all the while humming the beat of the song.

“The transition we saw in her [Wray] was kind of like ‘My Fair Lady,’” said Campbell, referencing the character Eliza Doolittle’s makeover. “She was taking boxing lessons and Pilates and even did the Master Cleanser diet,” said Campbell. The diet consists solely of a cocktail of lemon water, cayenne pepper and maple syrup. How did she do? “Nicole really is a trooper,” Campbell said proudly. “For the video, we wanted Nicole to look young, funky, girly and sweet,” Campbell said.

The video pays homage to the Eighties animated series “Gem and the Holograms,” which has achieved cult-like status amongst Gen-Yers. Wray said she was shopping in Urban Outfitters one day when she saw a T-shirt with “Gem and the Holograms” emblazoned on the front and she knew she wanted to incorporate that theme into the video concept. Wray, who said she was in her “early 20s,” noted, “I’m a big fan of the Eighties and thought this concept would combine glamour, rock ’n’ roll and rhythm and blues.” In the video, Wray, in full Gem regalia, complete with fingerless gloves, slouchy boots and sparkles on her face and on her neon-colored clothing, tries to seduce fellow Roc-a-Fella recording artist Cam’ron, who makes a cameo.

“Nicole and I have been friends for almost six years,” Cam’ron said between takes. “We’re trying to make this video seem as real as possible” — a tricky feat, considering that, at various parts of the day, a Great Dane was spotted strutting on the set, and a crew member was asked to “watch the Rolls Royce parked outside.”

Cam’ron is no stranger to style. “I’ve been fly since I was young,” he said. “I appreciate being color coordinated.”

Cam’ron’s own sportswear line is in the works — but he did just launch his own brand of cognac. “It’s called Sizzurp. You know, like, syrup with an izzurp,” he said.

Campbell plans to continue working with Wray after the video shoot is complete. “Image is really important,” Campbell said. “I’ll continue to work with her to show her how she needs to dress and how she needs to look in the future.”

Wray, of course, trusted her mentor’s advice. “Naomi would say, ‘No, Nicole, that’s not going to work,’ if I suggested something that wasn’t going to look good,” Wray said. “I let her lead the way. With Naomi Campbell, I really can’t go wrong.”