Naomi Campbell’s Show for a Cause

Saturday night, Valentine’s Day, an averted snowstorm — whatever the factors that were at play — Naomi Campbell’s Fashion For Relief show was, dare we say, fun?

By Rosemary Feitelberg and Roxanne Robinson on February 15, 2015
View Slideshow 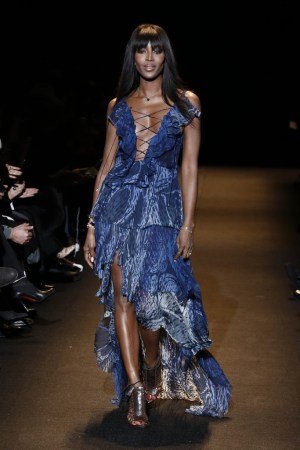 NAOMI’S CAUSE: Saturday night, Valentine’s Day, an averted snowstorm — whatever the factors that were at play — Naomi Campbell’s Fashion For Relief show was, dare we say, fun?

Mary J. Blige, Bryshere Gray, Rosario Dawson, Kelly Osbourne, Nene Leakes, Michelle Rodriguez, Quincy and Paris Hilton were among the notables who walked the runway quite simply because Campbell asked. Ditto for Justin Bieber, Christina Milian, Estelle, Russell Simmons and Zac Posen, who plunked themselves down in the rowdy front row. The newly kinder-gentler supermodel had similar pull with agencies that ponied up nearly 60 models. (Campbell “probably has worked with most of them,” as Tyson Beckford mentioned beforehand.) Designers also came through in a big way, with Tom Ford, Marc Jacobs, Calvin Klein, Thom Browne, Diane von Furstenberg, Proenza Schouler, Emilio Pucci, Givenchy, Ralph Lauren and Roberto Cavalli providing the 100-plus looks. Campbell needed only 10 days of wrangling to orchestrate the event for the Ebola Survival Fund, a nonprofit helping victims of the disease in Liberia and Sierra Leone.

Hoarse from cheering, Campbell could not have been more grateful, ricocheting around the room hugging supporters and posing for selfies with pretty much anyone who asked. The goodwill even carried over to backstage photographers who stood by, faintly smiling, waiting for their turn. The feel-goodness carried over to the front of the house, where the cheers made it clear guests wanted to be there, versus had to be there.

The backstage scene was raucous throughout the show, with models running and laughing their way off the runway, while others clustered around a TV cheering on their fellow catwalkers as if they were Real Madrid soccer fans. Naomi being Naomi, the start time did run a tad late, which didn’t ruffle any of the models who guess-timated a 75-minute grace time (it was closer to an hour.) “My mom was worried that she was going to be late,” Dawson said, not the least bit bothered by the delay. Nor was Osbourne, who said, “Naomi is one of the most generous slash incredibly nutty people you’ll ever meet in your life.”

Pre-runway jitters would not deter a Burberry-wearing Blige in any way. “This is what friends do,” she said. Like many in the crowd, Blige chatted about a recent project, “The London Sessions” with Disclosure and four-time Grammy winner Sam Smith. “Look at you,” she told Cassie Ventura approvingly, who is recording her first album in 10 years. Rodriguez is also in a writing mode, toiling with a script. The inspiration? “Getting older — you look in the mirror and think, “Time’s ticking…What am I doing with my life? What are my dreams and what do I care about?”

Hilton appeared to be philosophically inspired in a different way, disappearing backstage at one point only to resurface minutes later with a noticeably leafy fragrance. Posing sultrily with his runway escort June Ambrose (in a Beyoncé-inspired orange sequin Tom Ford football jersey dress), Joe Zee said, “It’s my night to be Derek Zoolander.” (He would know, having played a stylist in Ben Stiller’s 2001 “Zoolander” flick.)

The actual  Zoolander runway moment most definitely went to Osbourne and her fellow “Fashion Police” critic Brad Goreski. Describing herself as “the first non-model” to wear Thom Browne on the runway, the lavender-haired Osbourne donned a fitted houndstooth dress bedecked in multicolored feathers and a coordinating jacket. Not to be outdone, Goreski went with a fitted suit that was reminiscent of a futuristic bellhop costume, complete with cap. While Osbourne predicted the laughs would be on them, Goreski said, “We always tell people to take risks on ‘Fashion Police’ so now it is our turn to take one.”

“I’m the one in the feathers, in case you hadn’t noticed,” Osbourne teased Zee, sleekly understated in Burberry. Eyeing Beckford’s similar black suit, Zee said, “Oh good, someone else who looks normal.” But Beckford’s work life has been anything but that. He has been busy playing a stripper in the upcoming movie “Chocolate City.” As for the prep work, Beckford said, “I went to a lot of strip clubs — and the gym. But I don’t have to pole dance, which is good.”

At the show, all of the celebrity models faced a cavalcade of whoops, hollers and shouts. Campbell caused a sensation first in Pucci and then in Givenchy, as did “Empire” actor Gray, who stripped off his shirt. Hilton sashayed the runway within an inch of her life and the crowd erupted when Leakes threw in an extra two hands up snap, before dramatically exiting the runway. One lesser-known lithesome model was so eager to get back on the runway for her second turn that she needed to be reminded that she wasn’t wearing any pants. Her dresser laughed, “Whew, I think I lost a few brain cells with that one.”

To hammer home the event’s message during the finale, all the models wore white T-shirts imprinted with a “O,” as in no more cases of ebola. While Campbell customized hers with a V-neck, some of the catwalkers were left feeling a little frumpy. “This looks bad,” said one dark-haired striker, glancing at her Timberlands and baggy black nylon pants.  “I need heels or something. I look like s–t.” she laughed. “Oh, who cares — it’s fun.”

That three-letter word trumped the more frequently used four-letter one that often abounds before, during and after most runway frenzy. Bouncing up and down, saying, “Thank you everyone” repeatedly, Campbell gamely gathered her VIPs for an Ellen DeGeneres-at-the-Oscars-worthy selfie. “Excuse the armpit. I didn’t have time to put on deodorant — my bad,” Rodriguez said.

Before running off to the after-party at Up & Down, Campbell said she wanted “to raise as much awareness and as much finances to make sure this never happens again.” The supermodel wasn’t about to take the credit. “Fashion for relief only happens because everyone comes together as a unit and as one. This doesn’t work because this is just an idea of mine. This only works because we all come together in a collaboration — Zac giving the clothes, everyone donating their time, the off-site auction items and private donations. That’s how it works.”

While the U.S. fight against ebola in West Africa has shifted from a military one to a civilian one and the epidemic no longer dominates the news as it once did, Campbell remained stalwart. “Maybe the powers-that-be are walking away from it but what about the public? Where’s the vaccine?” Campbell said. “We’re still traveling — we’re going on trains, planes, automobiles, buses, public transport — and we really don’t know what’s going on.”