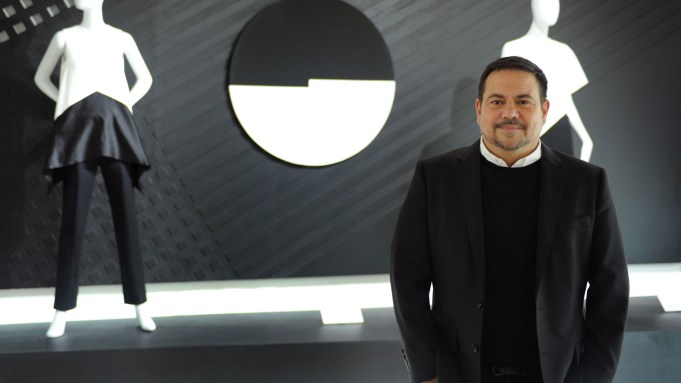 Narciso Rodriguez is the subject of an exhibition that opened over the weekend at Miami’s Patricia & Phillip Frost Art Museum at Florida International University. “Narciso Rodriguez: An Exercise in Minimalism” features more than 40 of Rodriguez’s designs alongside works by major artists who have influenced his collections, including Carmen Herrera, Donald Judd, Jennifer Steinkamp, Lygia Clark, Mira Schendel, Antonio Llorens and Elena Asins. It will run through Jan. 8.

Rodriguez has been included in exhibitions in the past, but not of this scale. “This is really meaningful to me because I’m on the verge of being around for 20 years,” said the designer, who founded his own label in 1997. That said, the exhibition is not a retrospective — nor could it have been, as he lost the first four years of his archive — but an examination of the evolution of Rodriguez’s commitment to a specific line and architectural form.

“It’s more than just minimal,” said Rodriguez, discussing the label that has been attached to his brand for two decades. “People like to attach labels to designers — they’re maximalist or minimalist. That’s great. I can belong to a minimalist group as long as people know that there’s a lot that went into the work.”

That detail and purity of line, shape and color are what’s celebrated in the exhibition, which is a big statement for the Frost. It’s the museum’s first show devoted to fashion and is timed to Art Basel Miami, when the art (and fashion, marketing and partying) world descend on the city. “We’re expanding our programming and my initial thought was very simply that I’d like to include fashion and design in our exhibition programming,” said Jordana Pomeroy, director of the Frost Art Museum. “Narciso’s name came up and seemed like the best fit because of a number of reasons. One is that his garments are very sculptural, so we knew that we could do a good job of discussing his couture as art. And another is that he is of Cuban descent and we thought that would resonate well with a lot of the Miami audience. There aren’t that many Latinos that have meteorically soared as he has in the fashion industry.”

Still, Rodriguez is an interesting choice, as by definition his work is the opposite of theatrical. “In this day and age where more is more and social media is king and it’s all about a shoe and a bag and a perfume, Narciso is a person who has been working on a principal idea for a long time,” said Alex Gonzalez, creative director of Elle magazine, who worked with Klaudio Rodriguez, the curator of the Frost Art Museum, on curating the show. Gonzalez goes way back with Rodriguez, designing his first logo and label and was responsible for bringing him on board for the exhibition.

“What we’re trying to do in the exhibit is ask: What is minimalism how does it express itself in linear form?” said Gonzalez. “How is it that a Cuban-American designer chooses to express himself in this form?”

Gonzalez came to Rodriguez with an example of the kind of work he wanted the exhibition to focus on, using the architectural white double-faced top and black pants that closed the fall 2015 collection as the starting point. They went back as far as 2003, looking through the designer’s notes and sketches, which are included in the exhibition, as well as the clothes, seeking correlations between technique and artistic influences that ultimately became wearable. Rodriguez revisits his past collections regularly. “My work is so much about evolving ideas and techniques that I go through my archive often, but for different reasons. Whether personal reasons or construction or finishing or materials or proportion,” he said, noting that looking at it with the purpose of the exhibition in mind gave him a new perspective. “It made me go back through things that I had started years ago that I hadn’t thought about and started to use again. I used some of it in this past [spring 2017] show and it became the foundation of things that I’m working on in the next two collections.”

Talking specifically about what defines his style, Rodriguez noted a focus on shape, color and a combination of materials that come together to create an architectural line. “Even though something looks quite pure on the outside, you could turn it inside out and appreciate the construction that’s inside,” he said. “I really like showing that part of my work. There was a collection I did in 2004 or so that I basically put most of the construction on the exterior of the pieces. I just enjoyed it and it was a collection that people appreciated because of the consideration that went into the details.”

There are many examples of double-constructed woolens that are flat and tailor sharply, stretch materials, woven linens and bonded fabrics that he’s been using since 2005 and keeps in constant rotation. One of the most important and definitive techniques Rodriguez employs is tailoring on the bias. “That’s something I’ve been able to take into different places, tailoring differently to tailor fluid things,” he said, noting that that was the idea on which he founded his label after initially working for Donna Karan and Calvin Klein. “As a young person working in those sample rooms and working with those tailors, using what they taught me from old-world tailoring techniques and how to bring those forward really was the foundation of what I do today,” Rodriguez said.