NEW YORK — Nars is ramping up its assortment and adding a new face for spring.

Linda Evangelista will appear in advertisements for the brand’s spring and summer color collections — launching in February and April,... 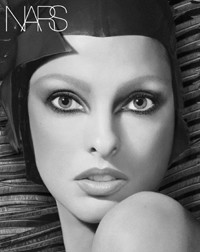 NEW YORK — Nars is ramping up its assortment and adding a new face for spring.

Linda Evangelista will appear in advertisements for the brand’s spring and summer color collections — launching in February and April, respectively. The ads were shot by Nars.

“Francois [Nars] made the choice to shoot Linda for this campaign,” said Joyce Avalon, vice president of sales and marketing for Nars. She added that Evangelista “represents the brand very well.” Single page ads will appear in February’s issue of Vogue and in Harper’s Bazaar in March. It will also run as a double-page spread in W magazine (WWD’s sister publication and, like Vogue, owned by Advance Publications) in March and will also be featured on the tester unit on counter in all doors.

In skin care, Nars Skin will add Nourishing Eye Cream to its lineup in March. Priced at $75, it is intended to deliver “intense” hydration with Active Phytoseed Complex.

Other Nars Skin additions slated to debut in May are Lightening Cream, for $98, formulated with Arbutin to create brighter, clearer skin and diminish the appearance of dark spots and uneven pigmentation and Brightening Serum, which retails for $58 and moisturizes skin as well as improves dullness with ingredients such as chestnut rose fruit and macadamia nut oil.

In color, Nars Eye Brightener, which contains a primer to prepare the eye on one end and a lightweight concealer on the other, will launch in May and comes in six shades for $22 each.

This year Nars will also celebrate its 10-year anniversary. “We are launching a signature Artist Palette that will contain the 12 original lipsticks — which, to this day, remain staples in the line,” noted Avalon. She added that Nars is working with Barneys New York on an in-store event marking the anniversary, as the retailer initially launched the brand. Nars is now sold in approximately 171 U.S. doors and internationally in about 85 doors and 20 countries.

Additional skin products will be added to the line in the fall along with the debut of another well-known face for the fall and holiday collections.