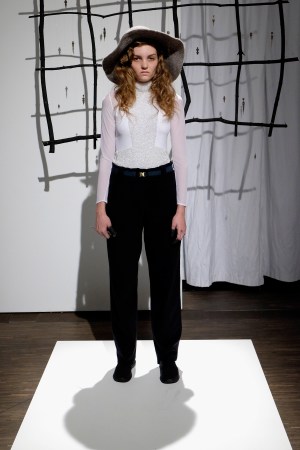 In her MBFWB stage debut, young Berlin designer and filmmaker Nathini van der Meer demonstrated just that kind of moody, underground edge one tends to expect from this creative capital’s talent. Inspired by two “amazing women” she met on her last trip to the U.S. — an astronaut and a fence-fixing, overalls-wearing cow girl — van der Meer’s “Last Frontier” collection was filled with seasonless, genderless staples at once timeless and futuristic, earthy yet otherworldly.

Scavengerlike, the designer made use of seat-belt detailing for belts and closures, rubber strings like parachute cords that can be pulled and tied to change the shape of clothes — but also served to decorate, hanging loose like tribal fringe or knotted into intricate macramé patterns. She handwove rubber strips into oversize knee patches, quilted technical fabrics over boiled wool for flight suits and protective sweatshirts, and embroidered jet caviar or ice crystal beads on transparent stretch tops. After all, some adornment is necessary, wherever the frontier lies: be it in the fields, under water, in the air or on the rooftops of our urban jungles — as visualized in van der Meer’s accompanying film.