For several of the Cooper-Hewitt's 2005 and 2006 National Design Award winners, breakfast at the White House capped years, even decades, of working with little fanfare. 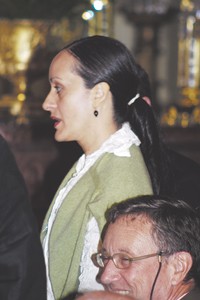 WASHINGTON — Outside the White House Monday morning, a tourist well past her teenage years told her parents, “I really want to see the ruby slippers,” referring to Judy Garland’s kicks in “The “Wizard of Oz,” on display at the Smithsonian. Indoors, First Lady Laura Bush celebrated an array of blue-ribbon designers whose work aims to be equally alluring and lasting.

For several of the Cooper-Hewitt’s 2005 and 2006 National Design Award winners, breakfast at the White House capped years, even decades, of working with little fanfare.

Project Alabama’s Natalie Chanin invited her father to join in the festivities. “This is really his day,” she said. “He put me through school, he paid my way and supported me when he couldn’t really imagine what I was doing.”

Isabel and Ruben Toledo, winners of the 2005 Fashion Design Award, marveled at the White House’s impressive marble pillars with architect and interior designer Calvin Tsao, a 2006 finalist for interior design. “For a Cuban immigrant, this is a magnificent thing. And all my Cuban family is rooting for me back home,” Ruben Toledo said.

Thom Browne, a 2006 runner-up to Maria Cornejo for Fashion Design, said, “I come from a family of bankers and lawyers, and they joked that they can’t believe I’m the one that gets to go to the White House.”

Before introducing the First Lady, Cooper-Hewitt director Paul Warwick Thompson noted the National Design Awards are “to advance the public’s understanding of design.”

The idea that design, and fashion in particular, merits such national attention was welcome news to many attendees. Isabel Toledo said, “I have to say I love that design has come to the White House. That is a very big deal.”

Over the past few years, the First Lady has taken a public role in championing design, as honorary patron of the awards. “I always look forward to this gathering. I’m particularly interested in design and I get to meet people whose work I’ve admired for years … From rocket design to vase design, to architecture and chair design, the reach of design is incredible. Your creations have the power to inform and empower us,” she said.

“Over the weekend, I had the chance to see ‘The Devil Wears Prada,’ and as one of the fashion editors in the film said, ‘Clothing design is greater than art because you live your life in it’ … The film does show us how everyday objects like clothes can show good design,” the First Lady continued. “A well-designed piece of athletic clothing can allow us to run or mountain bike well into our advanced years” — an apparent reference to her newly 60-year-old husband’s physical fitness.

Regarding a weightier matter, the First Lady urged honorees to pitch in with the post-Katrina rebuilding of the Gulf Coast. “That region faces unprecedented development. This is an opportunity for architects, urban planners and landscape designers to plan something that will offer something for everybody … This will be part of the legacy today’s designers leave to others.”

Bush’s interest in design seems to been passed on to her daughter Barbara, who became a full-time entry-level staffer at the Cooper-Hewitt earlier this month. While the First Daughter may feel right at home in her new job, more experienced design-friendly professionals were getting better acquainted with her parents’ home.

Even NDA juror Li Edelokoort, chairwoman of the directional Design Academy Eindhoven, was a bit spellbound by the experience. Snapping photos in the perfectly appointed rooms, she said, “We are enjoying this funny thing — to be here in real life.”

“American design is emerging from a period of distress — logically — due to the beginning of the century and the echoes of the Big Bang,” Edelokoort said. “But if you line up all the [National Design Award] candidates, from interior design to landscape design, from small scale to big scale, from individual to more social, they cover the spectrum of the U.S. Now is the time for the U.S. to put design on a pedestal”

After the formal presentation, the First Lady told WWD, “Design is something that is really close to my heart and interesting to me. Of course, I have had the opportunity to live in this beautiful house, and I have enjoyed the chance to live amidst all this beautiful furniture and art. We also have a very contemporary ranch house, which one of the winners who is here today, Michael Gabellini, designed. And I worked with him on that, which was fun.”

Just months away from her 100th birthday, Eva Zeisel, the 2005 Lifetime Achievement Award winner, rose from her wheelchair to greet the First Lady. Earlier, Bush told guests how the prime minister of Hungary had given the president some of the Hungarian-born Zeisel’s work as sign of friendship between the two countries. Those gifts will go to the U.S. Archives.

This year’s Lifetime Achievement Award winner, Paolo Soleri, handed out his memo about the need for the Lean Alternative, a move away from materialism. Fellow architect Stanley Saitowitz mused about another reduction plan. “Look at this house. It’s full of molding and moldy. They should knock it down to build a new contemporary White House.”

But fine design should not be limited to historical landmarks, according to Nike’s front man John Hoke III. “The American culture is beginning to awaken to the value of good design … It does make a difference. It’s not just an aesthetic. It has an apparent function in every American’s day. America’s ready. We’re ready for this.”