The Natori Co. has signed a licensing agreement with Dana-co Apparel Group to produce a collection of bras and coordinating panties bearing the Josie name for spring 2008. 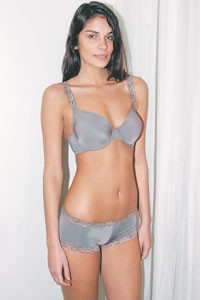 The Natori Co. has signed a licensing agreement with Dana-co Apparel Group to produce a collection of bras and coordinating panties bearing the Josie name for spring 2008.

Neither officials at Dana-co nor Josie Natori, chairman and chief executive officer of the Natori company, would give a first-year wholesale sales projection. But branded bras by Josie might generate first-year revenues of $3 million to $5 million, according to industry estimates. Total wholesale volume of Natori foundations and panties is estimated at $20 million. This is in addition to annual revenues of about $40 million generated from daywear, sleepwear, robes and at-homewear by the Natori company.

“It’s an appropriate time to build an entire Natori and Josie lifestyle,” Natori said. “We introduced Josie daywear for spring 2007 and now the bras and underwear will be launched at the August market.”

Bra cup sizes will start at 30A and go to 40DD. A select number of bras by Natori will be available up to a G cup.

“We’re very serious about the bra business and we’ve grown it tremendously over the past year,” Natori said. “We’ve done very well with classic, seamless, molded bras by Natori. Now, bras by Josie will offer more fashion with embellishments, laces and embroideries, and will be spirited and contemporary looking. We intend for this to become a meaningful business. This will not be a T-stand business.”

Distribution of Josie bras is aimed at major specialty and department stores, including Nordstrom, Saks Fifth Avenue, Bloomingdale’s and Dillard’s Department Stores. Suggested retail will be $40 to $60.