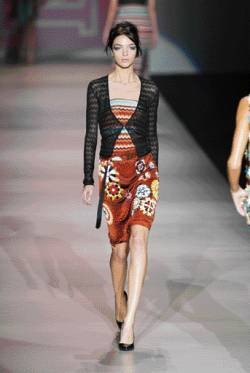 Missoni: Fabulous! Heading a design house is always tough — at some times tougher than at others. Season after season, Angela Missoni must deal not only with the typical challenges of that role, but with an iconic legacy not always in step with the fashion moment. Since assuming the reins at the family house, Missoni has struggled to balance legacy with currency, and in the collection she showed on Tuesday morning, the two came together like a charm. The result was her best, most confident collection yet. Clearly, Missoni has worked through whatever hesitancy she once felt over tempering the family signatures. At the same time, she has attained a comfort level with moving beyond knitwear, making the collection more complete.Throughout, Missoni kept in cool control — control of the shapes, the patterns and the editorial trills that have sometimes turned deafening. She favored clean, lean lines while paying vague homage to the swinging Sixties and jetset Seventies. And while the mood was sexy, it happily steered far clear of the flash-and-trash motif that raced through the week. There were little cardigans over dresses, tanks over bicycle pants, and some terrific structured coats. Sometimes Missoni went for mixed patterns and at other times, she played her zigzags, kaleidoscopes and mélanges against black. Her program notes, written with characteristic quirkiness by Anna Piaggi, heralded the “return of the femme coquette,” while referencing Jacques Rivette and Daniel Sturgis. But the most important message wasn’t about outside artsy influences. It read, “modern Missoni.” Burberry Prorsum: Burberry polish with a London street edge — if it sounds like a winning combination, it was. In the collection he showed on Monday, Christopher Bailey indicated that he might just be what’s been missing from the London fashion scene in recent seasons: someone whose clothes strike a nerve, yet stand up well beyond the limited realm of crazy-kid stuff. He knows how to take a concept that could seem too “street” for the runway and spiff it up a bunch. Which was his goal exactly. Bailey took elements of high function, particularly parachute accoutrements, and niftied them up with, he said, “couture details.” Exaggeration in typical young designer speak? Of course. But Bailey did indeed enrich gutsy clothes with deft subtleties, and they looked terrific. Despite the haute lingo, Bailey embraces the casual life. He put rugged flight jackets with knickers and finished double-layer ribbed knits with grommets. He played with masculine and feminine elements throughout, starting with his palette of strong neutrals and army green played against girly lavenders and pinks. And he worked in moments of whimsy: men’s shirts made of ribbon stripes, and a charming teapot print that played to an age-old British tradition with cartoon-like irreverence. But then, Bailey’s role at Burberry is to keep the soul while taking the starch out of tradition, which he did by enlarging those fab plaids and recasting them in a fabulous sweater and scarf and pale lace tanks to layer any which way — a smart move.Bailey exhibited savvy in another way, too. He showed at the Palazzo Reale, adjacent to the grand Duomo in the center of the city. Built in the 1770s, it became a residence for such prominent figures as Napoleon, Maria Teresa of Austria and the Savoia family. The palazzo was bombed during World War II and has only been partially restored. The audience found it both interesting and convenient — a trend all of Milan should embrace.Alberta Ferretti: For spring, chiffon became Alberta Ferretti’s plaything to twist, braid and knot just as she pleased. She has always had a way with the stuff, and this time, Ferretti created some pretty, if rough-hewn, versions of the filmy feminine dresses her ladies go for. One minidress was made of crocheted chiffon the color of straw with a dark green ribbon around its low waist. Another, in hot pink, came with a tucked sunburst. But Ferretti’s folksy, handmade vibe went stale when she took it beyond the pretty fare done in her beloved chiffon. Long linen skirts and boxy tops studded with arabesques of silver beads looked out of step with the season, as did pieces done up in a corny folk-art print a la Grandma Moses. Ferretti should stick to what she knows — and does — best. The finale of super-trendy minidresses were hacked so short that wearing a hide-the-hips bathing suit would have been more modest.Blumarine: Why waste time showing a whole lot of day clothes? At Blumarine, Anna Molinari cut right to the cocktail, showing after-dark styles from look one — a slick, black satin party dress, bouncy with tulle underskirts and featuring a cheongsam closure studded in silver. Molinari’s potent concoction: two parts kicky chinoiserie to one part jewel-box ballerina, a little something she served up throughout the show.Not for Madame, but for Mademoiselle Butterfly, were mandarin tops cinched with leather obis and paired with cigarette pants or cropped satin kimono tops worn with tiny tap shorts. It was just the kind of stuff a Fifties sex kitten might wear while ordering umbrella drinks. And, although some of these Eastern combos were a little square, Molinari’s slinky dancing dresses rarely were.Throughout it, the ballerinas twirled in, wearing flippy minidresses in pink, of course. Molinari’s modern-day tutus came with two tiers of ruffles, with dropped waists or ruching to keep them supersexy. Meanwhile, mini fairy dresses in shining gold sequins or delicate beaded chiffon were perfect for the prima ballerina or any of her trapeze-artist peers.