The brand, which has been owned by VF Corp. since 2003, has undergone major changes over the past few years. 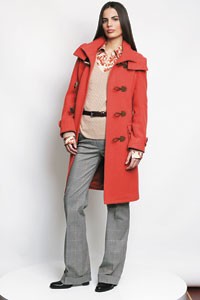 NEW YORK — Nautica is reenergizing — this time to benefit the female shopper.

The brand, which has been owned by VF Corp. since 2003, has undergone major changes over the past few years. The company ended its Nautica Jeans business for women in the U.S. in 2004, although it’s available internationally, in order to refocus its efforts on the men’s apparel sector. After elevating the quality of the product, marketing and positioning of its men’s wear, Nautica is set to launch a line of women’s better sportswear for fall. And accessories and a Nautica women’s fragrance are in the works.

The Nautica brand brings in about $2 billion at retail with the 43 product categories it currently offers. While Denise Seegal, president and chief executive officer of VF Sportswear Inc.’s Nautica and Kipling brands, declined to give first-year sales projections for the new women’s line, she said Nautica is well on its way to increasing its total volume by 50 percent with the collection. Better sportswear adds to the brand’s mix of offerings for women, which includes sleepwear and swimwear, in addition to home, which Seegal said female shoppers have been buying avidly.

This is the third time Nautica has gone after women’s sportswear. The first was a three-year licensing deal with Bernard Chaus that ended in October 1998. It was followed by the Nautica Jeans women’s line, which hit stores for fall 2000.

Now, after months of consumer research, Seegal claimed the women’s line is on target with what the customer is seeking. She said since there is an 88 percent brand awareness rate already among women — and with 75 percent of the men’s purchases being made by or influenced by women — there was a natural need for women’s apparel. Therefore, the company has been spending a large amount of its marketing budget, about $14 million, on placing its men’s ads inside women’s magazines like O, The Oprah Magazine, Vogue and In Style.

“We really wanted to take the time to research and listen to what the customer wanted from us,” Seegal said. “What we found was that the female consumer felt there was something missing in the better area and wanted a line that complements her lifestyle. She wants feminine clothes that have a casual ease with upscale sensibility. She wants the clothes to work with her lifestyle so she can interchange as the day goes on.”

Seegal said after reviewing the research, the company found that with the Nautica brand, the consumer is looking for clothes that fit her, and not necessarily what fits in. She wants timeless classics and is inspired by great American icons and what they wore. So the line is surrounded by key pieces found in every woman’s wardrobe: dresses, pants, sweaters, shirts and outerwear. There is an array of fine-gauge cotton-knit tops; silk scarf print skirts and tops; tropical wool pants and skirts; featherweight cashmere sweaters, and cotton woven tops fitted especially for the female body. There’s also an array of outerwear pieces like quilted jackets and trenchcoats, as well as wool duffle coats, which have become signature Nautica pieces in the men’s line. The colors are also signature Nautica across the board: white, navy, orange and yellow, with brown and pink worked in where appropriate.

Each piece is accented with details like the skinny leather belt that comes with select pants and skirts and the polished metal snaps on skirts and tops. The collection wholesales from $20 for a knit top to $115 for an outerwear piece. Seegal said the price range should fit in well with competitors like Calvin Klein, Lauren Ralph Lauren, Michael Michael Kors, City Unltd. and Nine West. Seegal said she hopes to launch the brand in about 300 major department store doors nationally, including Federated Department Stores, Dillard’s and Belk. Retail buyers will see the line for the first time this week.

Nautica no longer runs its own freestanding stores in the U.S. since it closed its flagship in Rockefeller Center here in August 2004, but it does operate 160 Nautica boutiques overseas, which sell the men’s products as well as the Nautica Jeans line for women. The women’s sportswear line will extend globally next year, launching in Europe.

“We do really well internationally, but we thought we really needed to get it right here first and then go overseas with this line,” Seegal explained. “But the international retailers have been asking for it for some time now, so the momentum is building.”

Also in the works is a freestanding Nautica store in Saucon Valley, Pa. The store is scheduled to open in October and will house the entire Nautica offering. Seegal said the company has a plan in place to open more stores domestically, as long as the first one performs well. Also, Seegal said she is planning to launch a women’s accessories program for spring 2007 and is working with Coty on a women’s fragrance, also for spring 2007. This will be Nautica’s second scent for women. The first, called Classic, launched in spring 1997 and is no longer on the market.