DALLAS — Susan Dell is in fashion for the long haul, and she’s got great expectations.

At a party thrown by Neiman Marcus to launch her new collection, Phi, Dell predicted, “In three to five years, I envision that we will be... 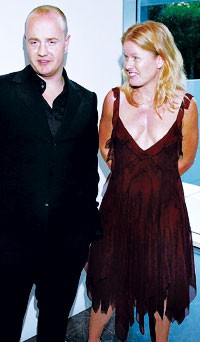 DALLAS — Susan Dell is in fashion for the long haul, and she’s got great expectations.

At a party thrown by Neiman Marcus to launch her new collection, Phi, Dell predicted, “In three to five years, I envision that we will be recognized as a prominent brand in the high-end designer part of the market and eventually in other countries as well as the U.S. I feel this is a bright shining star that will rise beyond anyone’s expectations. I’m really proud.”

Why is the wife of billionaire Michael Dell, who was just named the richest American under 40 for the sixth consecutive year by Fortune magazine, so dedicated to fashion?

“I can’t stay out of the business — it’s what I’ve loved to do my whole life,” she said. “I just fall deeper and deeper in love. With [design director] Andreas Melbostad’s talent, it will take me to the level that I want to be at, which is the best of the best in our industry.”

Such determination is classic Dell. Last year she completed the daunting Ironman Triathlon in Hawaii in a competitive time — despite a broken toe.

She was in typical lean, energetic form for the party, held earlier this month at Howard and Cindy Rachofsky’s imposing white-and- black marble Richard Meier mansion. Guests included a few dozen of Neiman’s top customers as well as Dell’s father and her two brothers and their wives, who all live in Dallas.

Almost all the guests were locals except for Melbostad, who seemed bemused by his first trip to Texas. “It’s all very new to me, especially this whole concept of having to have a car,” he said. “I’m used to Paris and London.”

Company president Julia Hansen was also feeling a tad alienated, but in her case it’s the fashion scene she finds foreign given her background at Zoot Sports, which specializes in triathlon attire, and Levi Strauss.

“It’s pattern making for dummies,” joked Hansen, admitting that Levi 501s and a “wife beater” were her usual attire. Getting serious, she added, “We plan to have a culture that is really positive as opposed to very special people and the not-so-special people. It starts at the stockroom through IT.”

From across the room, Michelle Shelmire eyed Dell’s ensemble. “I’m going to Two by Two [a charity benefit] and I think I want to wear that,” she said. “I was going to do a retro Prada look, but instead I’ll do…what is that? The sort of feminine kick-your-ass look.”

The company has intentionally limited distribution of its inaugural fall season to three stores — Neiman Marcus’ flagship in Dallas, Colette in Paris and Restir in Tokyo — in addition to Dell’s new store in SoHo.

“We’ve had a few conversations about availability and how we want to position it and how many points of distribution we want to have,” Hansen explained. “We have to choose who we think will be the best retail partners.”

Dell is clearly Phi’s best customer and biggest fan so far. She’s worn the collection most of the time all summer, even though only the fall line was available. And just about everything Melbostad cuts from the collection, she claims for her closet.

“I’m trading in my wooden hangers,” she joked. “Give me wire ones so I can fit these clothes in.”