Neiman Marcus' vice president and fashion director, Joan Kaner, is retiring after 16 years in the job and 38 in the industry. 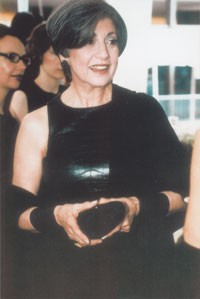 NEW YORK — Joan Kaner will resign at the end of the month as senior vice president and fashion director of Neiman Marcus, a position she’s held for 16 years.

“Joan had indicated some interest in this occurring, so it gave us a chance to think about it,” he said.

However, he added that he does not have an immediate successor in mind.

“Now that this is a public issue the search will get more intense,” he said. “A great deal of the decision would be from the store group. Karen Katz [ceo of the Neiman Marcus stores division] and her team have to talk about it. We’re going to look for the best person out there, whether it’s someone inside our company or out there. Filling Joan’s shoes is not going to be an easy task.”

“I wouldn’t say there’s a big talent pool,” said Elaine Hughes, president of E.A. Hughes & Co., a search firm here. “Thirty years ago every retailer had fashion directors. I would say the best pool would be the magazines. If you look at Elle and Vogue, the editors really have to have a point of view and an eye.”

Kaner plans to spend six months of the year in Sarasota, Fla., where she is building a house, and six months here. “I’m very excited about the prospect of life being almost like a blank book,” she said. “I have five wonderful grandchildren and a wonderful husband. Neither of us is getting any younger.”

Kaner has been an ardent supporter of young designers — she was instrumental in launching the careers of Zac Posen, Derek Lam, Proenza Schouler, Peter Som and Ralph Rucci — but at the same time an outspoken critic of the fashion industry. She’s taken to task magazine editors and fashion advertisers for visuals that seemed to glamorize the drug culture and, in more recent years, “lewd and lascivious” ads and fashion stories.

“I’ve seen so many bare breasts,” she said. “I think magazines have to be aspirational. In many ways the customer who wants to look like a lady and be elegant has been let down. But fashion has turned a corner and we’re seeing pretty clothes and more options.”

Kaner also complained loudly about fashion shows scheduled in inconvenient locations, jam-packed schedules and uncomfortable venues. “While I was waiting for many a show to start this past trip I was saying, ‘Thank God this is the last trip.'”

But Kaner said she’ll miss certain aspects of the business. “Every time you do those trips you’re always hoping this is gong to be the time you find something new and brilliant. I will miss that.”

Kaner’s contributions to Neiman’s included giving guidance and direction to its merchants, identifying trends, culling out important items and fashion each season and identifying opportunities, Tansky said. “For us and the industry in general, she’s helped identify strong emerging designers. She was very early in identifying Zac Posen as a talent. She identified Ralph Rucci as a key designer. That’s become a very important business for us.

“Not only did she operate in the designer world, she was in the contemporary and bridge market all the time for us,” he said. “That’s helped us with those categories of business.”

Rucci said Kaner’s retirement will be “a big loss to our industry. She’s somebody with such integrity, vision and kindness. She was my Carmel Snow. She had a singular direction that had to do with taste. Even if she didn’t enjoy something, she always found something positive to share with the designer.”

“She has been one of the pillars of fashion for many years and we will miss her,” said Oscar de la Renta. “She has extraordinary eyes for spotting new talent and her vision always proved to be correct.”

Posen called Kaner “incredibly instrumental” to his career. “She was the first person to come and look at my collection,” he said. “She had an incredibly chic eye and a true belief in couture and designer clothing and understood how the creative art can transcend the commercial experience.”

Kaner began her career in 1966 at Henri Bendel, where she was a buyer. “One of the highlights of my life was the almost 10 years I spent at Henri Bendel,” she said. “It was like Camelot, a brief moment in history. Geraldine [Stutz, Bendel’s president], was such a visionary. It was remarkable.”

She did two stints at Macy’s, the first in 1977, when she became fashion director for accessories and shoes. The second came in 1984 when she rejoined the store as vice president and fashion director for women’s ready-to-wear. In between, there was a five-year stretch when Kaner was vice president and divisional merchandise manager for accessories, fine jewelry and shoes at Bergdorf Goodman.

“I’m proud to have worked with Burt [Tansky], Alan Questrom, [retired chairman and ceo of J.C. Penney,] and Terry Lundgren, [chairman, president, ceo of Federated Department Stores] and to have learned from them,” she said. “I was lucky that I worked at Henri Bendel, Bergdorf’s and Neiman’s, the ultimate in luxury and fashion.”

So is this the last the fashion industry has heard from Kaner? “Retirement is new to me,” she said. “I’ve been working for 38 years. I don’t know what the future holds. If someone makes me an interesting proposal, consulting is something one can do. You just hop on a plane. Honestly, never say ‘never.'”