Net-a-porter Looks Beyond Megabrands for Fall

LONDON — It’s no longer all about the luxury megabrands for Net-a-porter, which has been enriching its buy with more up-and-coming and niche names, labels from emerging markets and vacation capsules.

The trend has been emerging across the market for the upcoming fall season, with retailers focusing on their lifestyle, beauty and off-the-catwalk offerings just as much they are on seasonal runway styles.

Net is planning its biggest Jet-a-porter vacation campaign to date, with 59 exclusive capsules in the works by the likes of Zimmermann; jewelry label Alighieri, which will introduce a line of summer espadrilles for Net, as well as summer workwear by strong-performing labels such as Tibi.

Another campaign spotlighting Korean labels like Gu_De, Pushbutton and Low Classic is set to launch later this year.

Other initiatives include a sustainability edit in line with the brand’s “long-term sustainability strategy” that will spotlight 30 brands working sustainably and exclusive capsules by the likes of Stella McCartney, Veja and Maggie Marilyn.

A number of direct-to-consumer brands, which have never wholesaled before and have built their businesses by making the most of Instagram buzz, are also set to make their debut on Net. They include the French label MaisonCléo, which has only been taking orders online every Wednesday so far; Frankie Shop, and Line by K.

“Customers love the feeling of discovery and these cult brands have fiercely dedicated followings. It’s about giving Net-a-porter customers a way in,” said Elizabeth von der Goltz, Net’s buying director, who was dressed in a khaki Frankie shop jumpsuit during a presentation of the retailer’s fall buy.

Younger brands have been leading the fall trend conversation for Net.

According to von der Goltz, there’s a move away from casual, masculine looks and a return to a more polished, refined aesthetic — and brands like Tommy Ton’s Deveaux, Khaite, Nanushka and Jacquemus have been spearheading the trend as much as the likes of Loewe and Bottega Veneta.

In fact, Net has increased its buys in Jacquemus and Deveaux by 300 percent and 120 percent, respectively, while Stockholm-based label Stand’s affordably priced outerwear has also been a winner and the retailer has bought into them deeply for the upcoming fall season, increasing the buy by 400 percent.

Over-the-top, fantasy fashion is another trend Net is standing behind and so it invested in up-and-coming names, including the likes of Richard Quinn, which impressed Net’s buying team with his “couture references,” Molly Goddard and New York breakout star Tomo Koizumi, who has never wholesaled before but will work on a special project with Net, launching six exclusive pieces in September.

Even though contemporary names and more accessible price points have been radically shifting the business and taking over significant market share, Net’s luxury business across ready-to-wear and fine jewelry seems to continue to thrive.

Von der Goltz said the platform has seen an increase in the number of jewelry pieces that cost more than 5,000 pounds sold and has also recently sold a bespoke diamond ring, priced at 180,000 pounds. 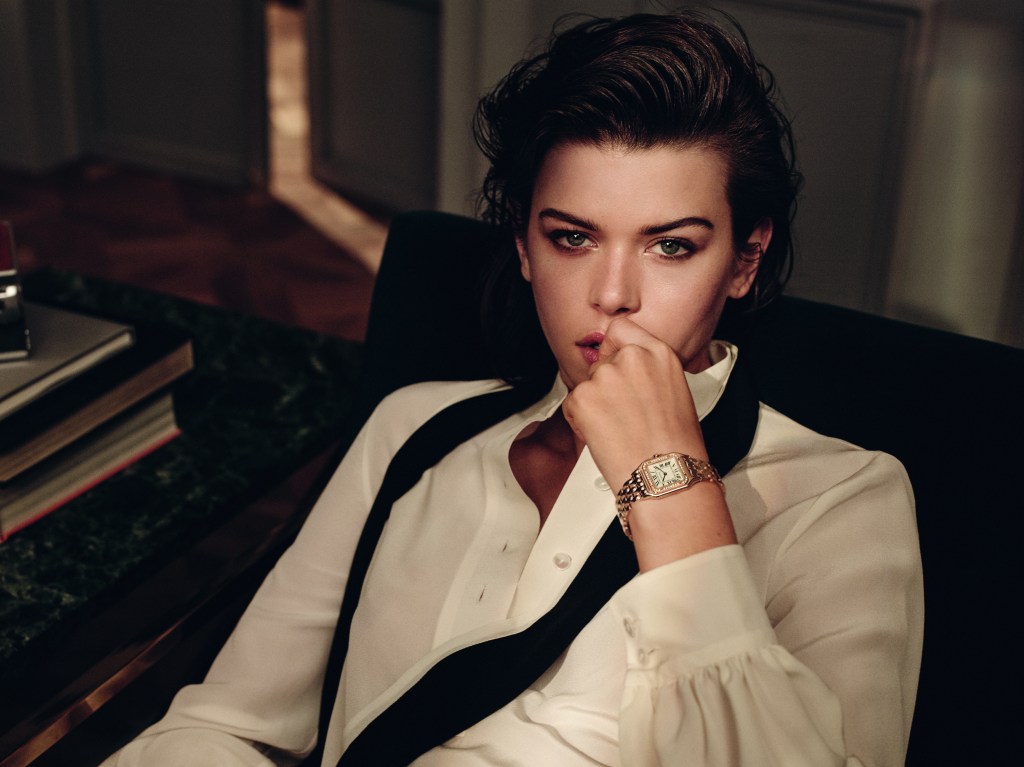 A campaign image for Net-a-porter’s launch of the new Cartier Panthère watch.

“We’ve become a destination for customers who want this type of bespoke service and also brands now see Net-a-porter as a real partner in their digital journey,” she added.

In the rtw world, there is also little price resistance when it comes to investment pieces like the shearling coats, cashmere knits or blanket capes that have been taking over the runways. In fact one of Net’s top-spending customers — dubbed EIPs, or “extremely important people” — bought 33 looks from The Row’s fall 2019 catwalk collection, with a basket price that surpassed $300,000.

Higher-priced bags by the big luxury designers are also making a comeback.

“The bag business has been driven by the ‘It’ bag, then there was a bigger focus on key bag trends and now the ‘It’ bag is making a return,” said von der Goltz, name-checking Balenciaga’s shopping tote, Bottega Veneta’s clutches and Chloé’s update on the Paddington bag as some of the key styles for fall.

Other accessories launches include exclusive hair accessories capsules by Danish brands Sophie Bille Brahe and Cecilie Bahnsen; sneaker collaborations such as Rick Owens x Veja and Khaite x Adidas, and an expansion of the platform’s offer on the popular naked sandal. The retailer wants to build on the success of the trend, having sold 11,000 units to date, with new square-toe styles by Rejina Pyo, By Far and Wandler.