Ewan McGregor as Halston and Rebecca Dayan as Elsa Peretti in "Halston."

According to data from the brand, sales are up 631 percent year-over-year, and traffic to Halston.com is up 3,200 percent, the majority from organic search. The brand declined to reveal actual sales figures.

Tiffany & Co. is also seeing “an explosion in interest” for jewelry designed by Halston muse Elsa Peretti, portrayed by Rebecca Dayan in the series, according to industry sources.

The momentum will continue in stores in August, when Neiman Marcus features the Halston x Netflix capsule collection in its store windows just in time for Emmy awards campaigning season. Saks Fifth Avenue is also rolling out the collection online and to 8 doors.

Marking the streamer’s first luxury designer collaboration, the capsule debuted June 7 on the Halston website, with a $1,295 “Liza” pleated Lurex caftan and a $1,395 “Elsa” batik chiffon caftan, among other styles.

The collection could mark a turning point for the Halston brand, for Netflix and for how fashion thinks about entertainment content. (More than one legacy brand has to be wishing Murphy would make a series about it.)

“The series is shedding light for Millennials and younger people on what Halston’s contribution to fashion was,” said Halston president Andrea Scoli. (Even if Halston’s family and others who worked with him in the 1970s have taken issue with Murphy’s Hollywood version.)

“It’s almost like a rebirth,” said Halston chief creative director Robert Rodriguez, who took on the role in October 2019, sharing that the capsule collection is 40 percent sold through. 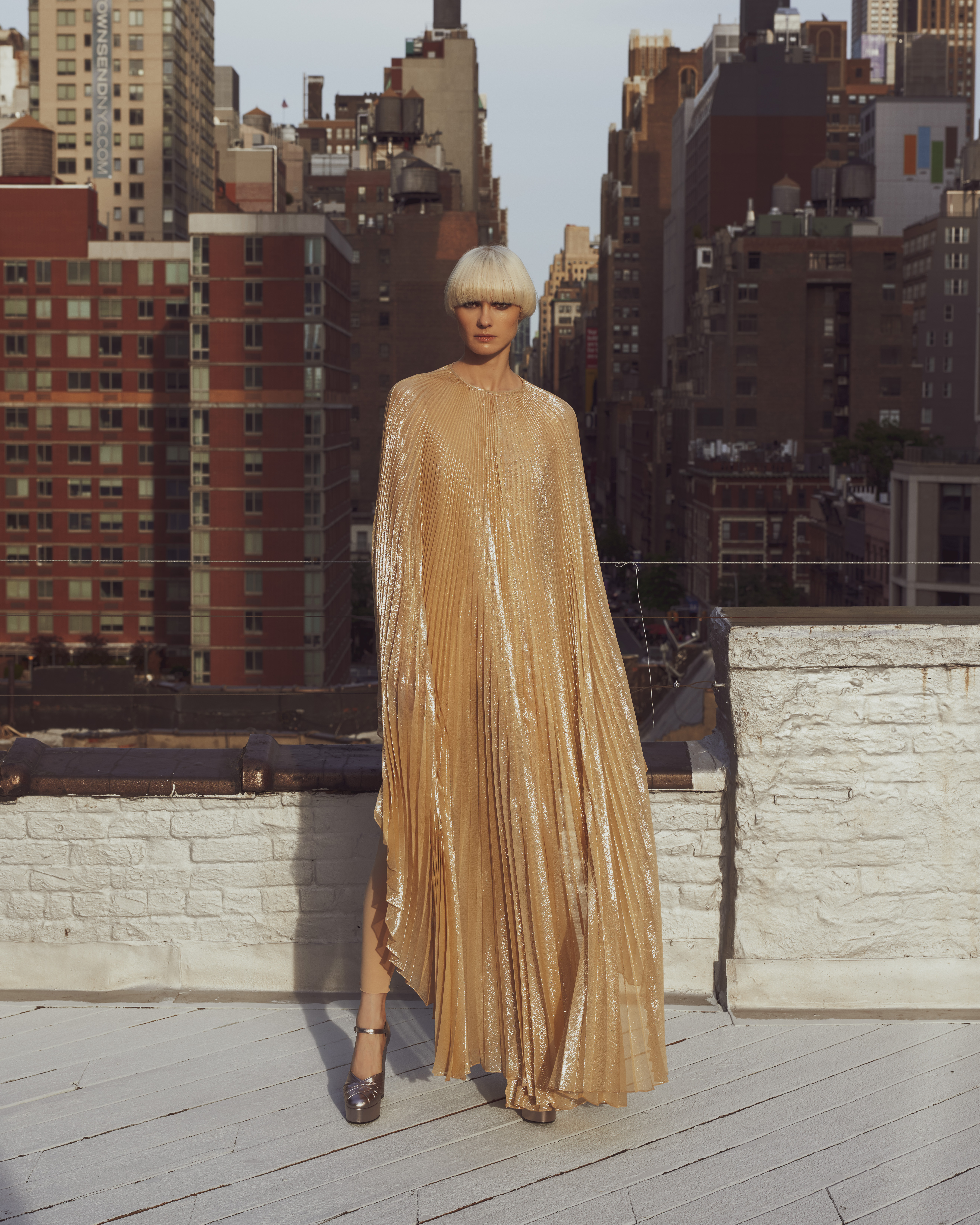 Certainly the timing couldn’t have been better. With American fashion the focus of two upcoming Costume Institute exhibitions at the Metropolitan Museum of Art, designers have been reflecting on the meaning of American design. Carolina Herrera’s Wes Gordon and Oscar de la Renta’s Fernando Garcia both mentioned the series in recent interviews, highlighting Halston, as well as Peretti’s style.

“The Halston brand has been pushed to a new level of relevance among our customers and became a part of the cultural conversation,” said Lana Todorovich, president and chief merchandising officer at Neiman Marcus, who has seen momentum in the Halston business, specifically eveningwear, since the series aired.

While it may seem like it was all perfectly planned, the Halston x Netflix fashion collaboration was an after thought, according to those involved.

Pre-lockdown in 2019, series costume designer Jeriana San Juan approached the house to borrow some archive pieces. But it wasn’t until filming resumed in early 2021 that Halston approached Netflix about partnering.

“They sent me a deck that had the Ultrasuede collection, the jersey ruched collection, the caftans in the batik prints,” Rodriguez said of the Netflix source material. “They allowed me to pick 10 to 12 pieces which I reworked a bit, building in body suits or full cat suits underneath so it felt current and athletic.” In his sportswear designs for the fall collection, Rodriguez has also begun incorporating some of the iconic Ultrasuede fabric.

No money changed hands, with both parties agreeing to share assets and logos.

While Netflix has certainly set fashion trends before, thanks to the costumes and characters in hit shows like “Bridgerton” and “Queen’s Gambit,” the streamer has been slow to roll out consumer products and fashion partnerships, releasing T-shirts pegged to “Stranger Things,” for example, but nothing as extensive as the Warner Bros. 200-brand blitz planned for the upcoming “Space Jam: A New Legacy.”

That approach could be changing with last week’s launch of Netflix.shop.

The platform is being billed as “a curated assortment” by Netflix’s new consumer products chief, Josh Simon, formerly vice president and head of global strategy for product, design, merchandising and categories at Nike. Certainly, the initial product offering up until now — including streetwear produced by Japanese apparel brand Beams pegged to anime series “Eden” and jewelry by Kristopher Kites, designer in residence for Don C and Virgil Abloh’s Chicago boutique, RSVP Gallery — is hypebeast cool.

The Halston capsule collection is not featured on the site. And whether Netflix will make future forays into high fashion remains to be seen. Netflix would not comment for this story or share viewership numbers for “Halston.”

There’s also the question of whether the troubled Halston brand, which has been through enough dizzying chapters for a sequel, can build on the moment. 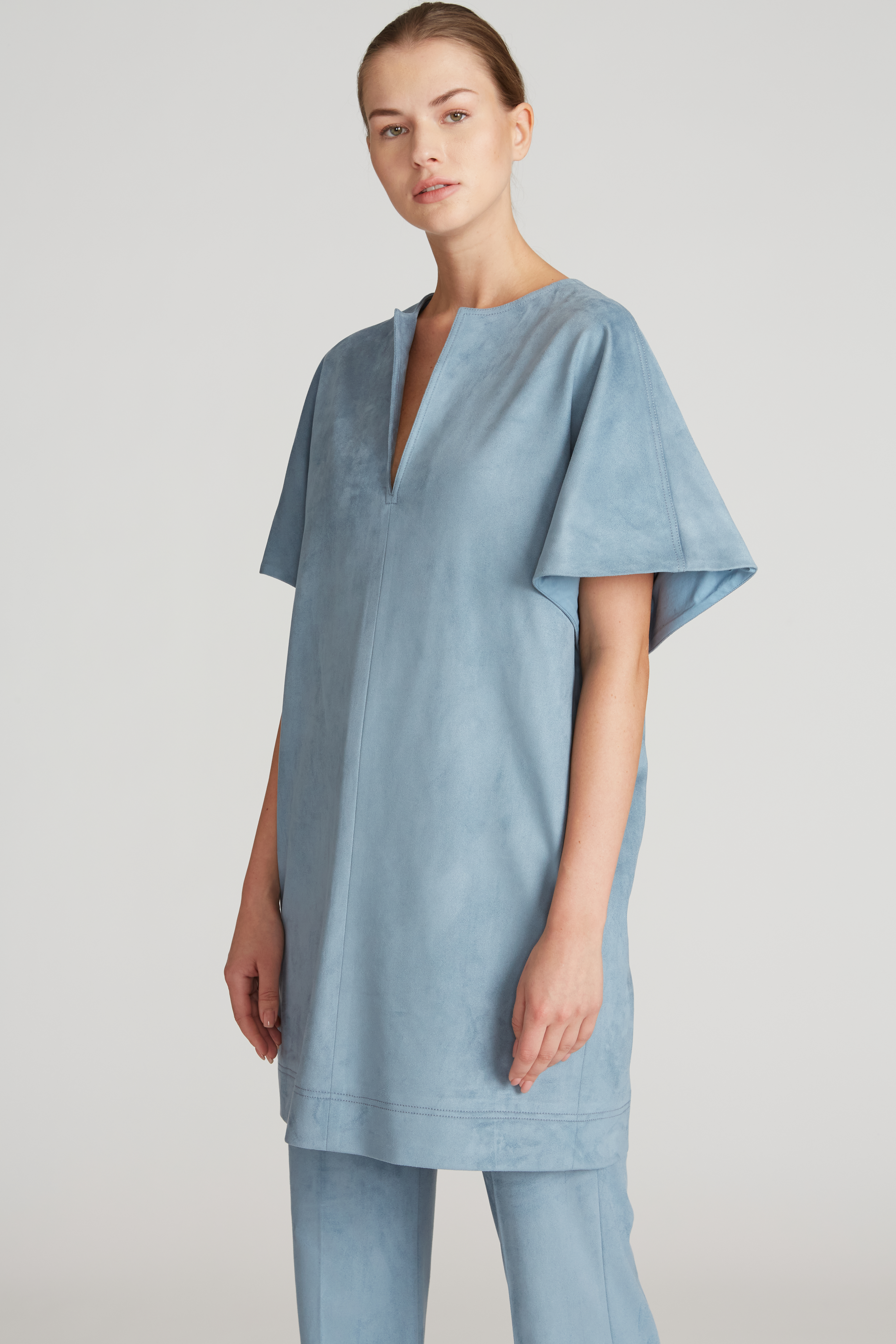 Those who have been involved in trying to revive Halston over the years include trailblazing designer Kevan Hall, now president of The Black Design Collective, and disgraced movie mogul Harvey Weinstein and fashion icon Sarah Jessica Parker, who gave the brand the gift of promoting it onscreen in the film “Sex and the City 2.”

Since 2019, the Halston name has been owned by brand management and media company Xcel Brands. Founded in 2011 by Robert D’Loren, Xcel has experience in reviving brands, he said, using, as an example, how he brought Isaac Mizrahi “back from death, taking it from doing nothing to $400 million at retail.”

Xcel licenses the Halston name to Groupe JS International for mid-market eveningwear and sportswear sold at department stores, and it is through that licensee that the Netflix capsule was actually designed and produced. At a price point of $1,000 to $2,000, the Halston x Netflix collection was a departure for the licensee, which typically sells styles in the $400 to $500 range, and a return to luxury for the Halston name.

Xcel is also trying to cash in on its own in-house, lower-priced H Halston line that sells on HSN and at some department stores. D’Loren said he is considering a vintage-inspired H Halston collection that will sell at Macy’s for the holidays. “It will be more of a retrospective of what Halston was in the period the series takes place, very ’70s and ’80s designed,” he said.

Separately from Groupe JS and Rodriguez’ collections, Xcel is also somewhat confusingly working on its own, more elevated Halston line. “Elegant, sensual and comfortable,” with technical fabrics, it will bring Halston into the now starting in fall 2022, D’Loren said, adding that former Neiman Marcus fashion director Ken Downing is advising.

Analytics from the Halston Instagram account registered a 28.7 percent increase in audience, with the biggest spike on May 16, the weekend the series started streaming, when Halston’s account gained 3,625 followers. With 114,000 total followers, the brand’s Instagram still has a steep climb to reach the 16 million of Michael Kors, however.

Halston has no plans to show during New York Fashion Week in September, but is looking for celebrity dressing opportunities. “We would love for Robert to dress some people for the Met Gala,” Scoli said.

Like many designer brands, Halston has been the subject of documentary films before, including one by Frederic Tcheng that aired on CNN in 2019. But none have generated the same traction as the series, Scoli said, noting that Murphy and Netflix added their own brand value. 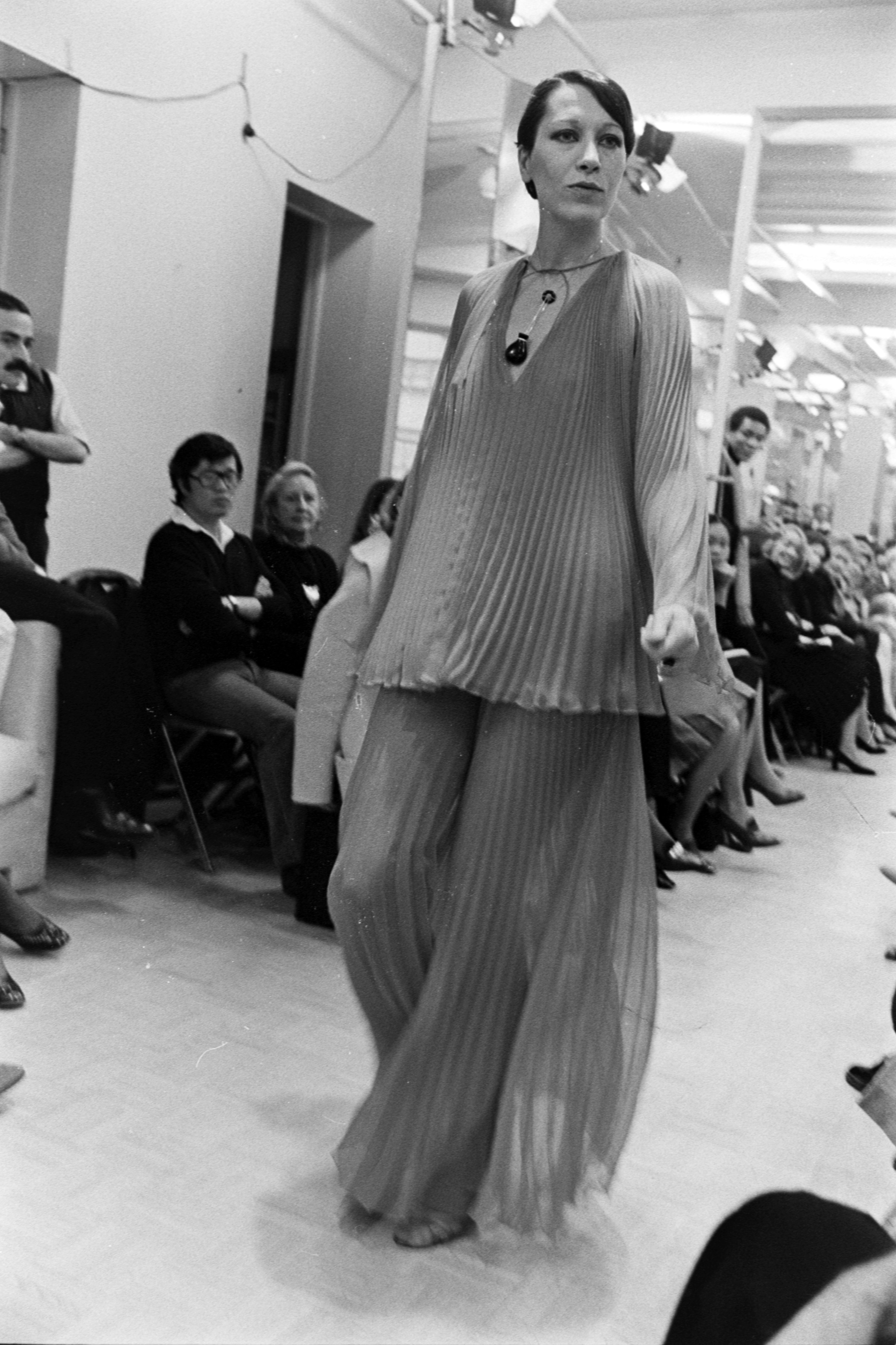 Model Elsa Peretti in a look from Halston’s spring 1974 Made to Order collection accessorized with her silver and black jade bottle necklace, 1973.  WWD

Murphy also produced “The Assassination of Gianni Versace” in 2018, which Versace creative director Donatella Versace wanted no part of; that film focused on Gianni Versace’s killer more than the designer’s own glamorous and creative life.

When it comes to synergy between Hollywood and fashion, it will be interesting to see how the Gucci brand plays the upcoming “House of Gucci” film out Nov. 24, starring Adam Driver, Lady Gaga and Gucci muse Jared Leto.

The Ridley Scott-directed feature is a dramatized version of the real-life events in the late 1980s and early ’90s that led to the murder of Maurizio Gucci — grandson of Guccio Gucci, the founder of the Italian fashion house. Its stars look chic-as-hell from the paparazzi shots that have leaked from the set.

While the brand might naturally be wary of a film depicting a scandal, isn’t that better when it comes to piquing the imagination and plucking the purse strings?

When asked about it by WWD, Gucci chief executive officer Marco Bizzari stressed that the Gucci family is no longer involved in the business, though the Kering-owned brand did give the film studio access to archives and props, and is hosting its next runway show in L.A. in November ahead of the film release, and around LACMA’s Art + Film Gala.

Who is Halston? Everything to Know about the Iconic American Designer