NEW YORK — Not to be outdone by the fashion contingent, jewelry makers and accessories designers have been making a splash around town during the spring show season with their own events. 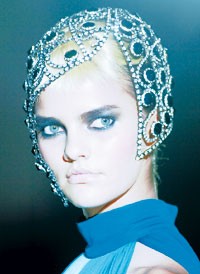 NEW YORK — Not to be outdone by the fashion contingent, jewelry makers and accessories designers have been making a splash around town during the spring show season with their own events.

Swarovski’s Runway Rocks event on Wednesday night, for example, answered the question of how to show intricately detailed jewelry on a runway by displaying big, over-the-top showstopping pieces. Swarovski had enlisted 19 jewelry and clothing designers to make pieces using the firm’s signature gems, and the results included the likes of Aude Lechere’s crystal necklace, arm bracelet and rings; Faraone Mennella’s twisted chain link and crystal necklace, and Peter Som’s crystal and pearl mesh bolero. Nadja Swarovski said of the event, “We wanted to stimulate the jewelry industry to demonstrate the creative power of crystals.” Mission accomplished.

On the fine jewelry front, both Seaman Schepps and Tiffany & Co. held events in honor of literary efforts. To fete its 100th anniversary and a new book, “Seaman Schepps: A Century of New York Jewelry Design,” the venerable jewelry house debuted an exhibit at the Museum of Arts & Design. Guests wandered through the pedestal installation that held 200 pieces of jewelry, along with Schepps’ original sketches and even handwritten notes from clients. It will be on display through Jan. 2.

Meanwhile, on Thursday night, Tiffany did a benefit for the New York Public Library, an event featuring authors such as John Loring (“Greetings from Andy”) and Candace Bushnell, which was attended by Dominick Dunne and Mary McFadden. Table settings by the writers themselves were displayed. Perhaps not surprisingly, Ms. “Sex and the City”’s was littered with Tiffany boxes, Louis Vuitton trunks, and Manolo Blahniks.

Designers Rafé Totengco and Kate Spade each debuted higher-end collections this week. Totengco threw a cocktail party in his store on Thursday evening, where guests saw his spring collection, which included candy-colored strappy platforms, print bags and metallic shoes. Kate Spade hosted her delightful breakfast again this season. Her new collection featured shiny gold hardware, candy colors and her signature basket bags, including a spiffy one for a bike.

Elsewhere, at Henry Beguelin, artisan Giorgio Testi demonstrated the craft of making leather goods in the firm’s office in the Meatpacking District. Along with the firm’s signature wovens, beading and studs, this season, Beguelin showed platform wedges and butterfly-patterned pieces.

On Sunday afternoon, Lambertson Truex had a cocktail party in the company’s sunny Chelsea showroom. Richard Lambertson and John Truex were clearly thinking of color, since the room was awash in every hue of the rainbow in bags, totes, sandals, belts and, surprisingly, gloves. “We deliver in October, so I thought why not a pair of pink leather driving gloves,” said Truex. “It’s still cold.” On Monday morning, Georgina Goodman showed her collection at a breakfast at Soho House. Along with her signature woven shoes produced in Spain, Goodman showed a “demi-couture” line handmade in Italy for the first time. The shoes featured intricate piecework, hand-painted stripes and charms. There were also slouchy bags and belts with details in brass and wood, enamel and stone beads.

Finally, on Tuesday, the luxury watch brand Jaeger-LeCoultre launched its new women’s timepiece, Idéale, at the Bryant Park Hotel. The watch is set with 24 diamonds and is offered with crocodile, gold and platinum straps. Retailing for approximately $3,500, the slim piece is intended to attract a new young customer.