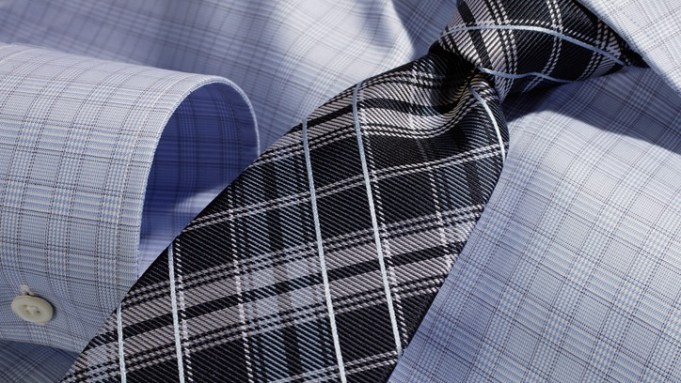 The luxury market’s taste for subtle and vetted products is good news for brands like Cutler & Gross, the British eyewear company that has been producing minimally logoed, handcrafted sunglasses and opticals for 40 years. Stocked by top fashion doors like Barneys New York, Maxfield and Butter, Cutler is returning to The Collective this year to expand its distribution among U.S. men’s stores. Best known for metal aviators, the brand is stepping away from the flight deck this spring for a stroll in East Egg with heavy acetate sunglasses in beachy colors inspired by “The Great Gatsby.” This season’s opticals are taking a similarly refined and elegant tack with keyhole bridges.  Cutler & Gross began as a bespoke service for customers of its store in London’s Knightsbridge, and the brand plans to offer that service in the U.S.

For the first time this season, Ike Behar will share its booth with another big name in men’s wear: Joseph Abboud. The former signed a license with JA Apparel, which owns the Abboud name, to manufacture the brand’s dress shirts. The shirts will receive their first airing at The Collective. Priced below Ike Behar’s signature wovens, Abboud’s dress shirt line has been expanded to include an in-stock program for its trim fit, and will include some unexpected pops of color like aqua blue. Ike Behar also will be showing its eponymous collection, which has been restructured this season to include four price levels (the shirts start at $125 retail) and three fits: slim, trim and classic. An incentive program will be offered. The shirts themselves are leaning toward the tried-and-true with dusty summertime hues and lawn-friendly shades of green.

The brand best known for those naughty slogan T-shirts has dressed up in the past few years, so much so that it’s pursuing more traditional men’s stores during New York market week. (Truth be told, those traditional men’s stores have loosened their proverbial neckties, too.) “One of our biggest strengths as a brand has always been our versatility,” said a spokesman. In its Collective debut, French Connection has invested in signature bottoms, including overwashed denim with abrasions, paint splatters and back-pocket details. Silhouettes range from skinny shapes to high rises and wider legs. Knitwear and wovens are also callouts.  The brand has focused on details for spring including double and extended plackets. French Connection, in a bid to cater to inventory-shy retailers, will also be showing fall and holiday 2009 collections as well.

The Spanish have a phrase for it, “la buena vida.” The good life. It’s a corporate mantra at Iberian apparel maker Desigual, whose cheery casual sportswear has spawned more than 100 outposts in Europe. Now the brand, best known for embellished knits, is setting its sights on the New World with a New York trade show debut at Blue. The brand already has 240 doors in the U.S., including a SoHo flagship and eight corner shops in Macy’s since it launched last season, but it’s betting its sunny, patchwork apparel will translate to specialty stores, too. It’s no surprise that for spring, the brand found inspiration in two ports of pleasure: Honolulu and Ibiza. The former range is stocked with colorful Hawaiian prints and the latter balances a more minimal palette of blue and white. Executives said special attention was paid to the collection’s knit polos and woven offering. In either case, expect a maximalist, youthful approach to sportswear not often seen this side of the Atlantic.

Few names express masculine competence, sex appeal and cool more than Steve McQueen, so it was just a matter of time before someone licensed the name for apparel. That someone is Johnson Motors. (Belstaff technically had the idea first but its unauthorized use of the moniker landed the Italian coat maker in court.) Johnson, a motorcycle importer founded in the Thirties that now mostly sells apparel, is a good fit for the McQueen estate. Back in the day, its best-selling bike, the Triumph, was a favorite of McQueen’s. The company took inspiration in its onetime customer and launched a line of moto-inspired premium duds that will make its New York debut at Blue next week. For its third season, Steve McQueen is offering an expanded collection of pima cotton Ts, fleece, outerwear and bags inspired by racetrack designs and vintage cool. Vince Gonzales, vice president of sales, said the line already has been picked up by Saks Fifth Avenue, Bloomingdale’s and Adriano Goldschmied for fall.

The Details
The Collective/Blue
July 19 to 21
Pier 94 at West
54th Street
Enkshows.com