There's more than one female look on the Israeli streets, from religious women in sidewalk-sweeping skirts with head coverings to hip young ones in well-fitting jodhpurs and monochromatic T-shirts. 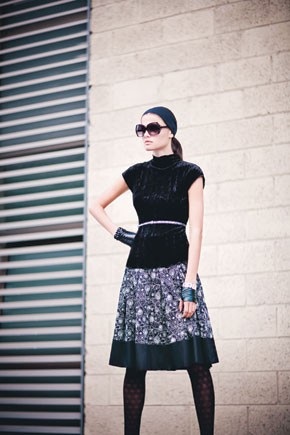 TEL AVIV — There’s more than one female look on the Israeli streets, from religious women in sidewalk-sweeping skirts with head coverings to hip young ones in well-fitting jodhpurs and monochromatic T-shirts. But a steadily emerging set of Israeli designers is hoping to exorcise the skin-baring woman of a certain age, offering her a more feminine and tasteful set of wardrobe options.

“You sometimes see people who are confusing going to the beach with going to the office,” said Leah Perez, head of fashion design at Shenkar College of Engineering and Design in Ramat Gan, a suburb of Tel Aviv. “They look like they took the wrong route.”

Israel is certainly a casual country, where more than one parliament member shows up for work without a jacket. And jeans are de rigueur in most offices on any day of the week, not just Thursday. (Israel has a Friday-Saturday weekend.) But sometime between the country’s socialist establishment and the last 60 years, many Israeli women confused looking feminine with looking sexy, said designer Nait Rosenfeld, who specializes in a feminine but tailored look in her Electrical District atelier.

“I don’t know if it’s the army, or has to do with something deeper, like being pioneers,” said Rosenfeld. “There’s an ethos about Israeli women and they worry that if they look too feminine, it reminds them of their grandmothers and aunts in Europe.”

Perez and Rosenfeld theorize that the lack of fashion sense is a result of Israel’s early socialist and overwhelmingly agricultural history. The early Zionists dressed in shorts and sandals, and were vehemently opposed to anything bourgeois, which was too reminiscent of their European backgrounds.

“There is something about not wanting to look their age, or being afraid of looking like the ‘old aunt,'” said Rosenfeld.

Some of that ethos has translated into the desire to look casual, “like you’re not trying too hard,” added Rosenfeld. And most of that, she believes, is rooted in the early days of Israel, a country in which its pioneers — as they’re often called — attempted to erase their pasts.

For Rosenfeld and a host of other young designers, the goal is to dress well, albeit more simply perhaps than the rest of the world.

The younger Israeli generation, from teenagers to thirtysomethings, are “dressed much better than their parents,” agreed Perez. “The younger they are, the more free and less conscious they are of all the socialist values. They’re more individual. They mix new and vintage, they try to create their own look.”

At the same time, said Perez, older women want to look young and lack models for how to look one’s age, because their mothers and grandmothers were of a different place and era. Instead, they look at their daughters and the kids on the street, and think that if they put on tight denim and keep their hair long, they will look younger. “There’s a kind of woman who is dressed too tight, too short, too exposed,” she said. “They somehow think that this is fashionable. They confuse exposure and femininity.”

Designer Ronen Chen, whose classically cut styles are popular in Israel and the U.S., is a little kinder to the Israeli woman who lets it all hang out.

“I don’t know if it’s just Israel, maybe it’s something Mediterranean, but it’s something in the air here that is more sensual, and women and men want to look sexier,” said Chen. “But there are a growing number of women who are more sophisticated and want different answers. We, the designers, are offering something else to our customers, something that is subtler, more understated and sophisticated. And they’re buying it.”

To that end, Chen is offering a little more sheer and lace in his current spring line, offering a slight hint of youth and sensuality, but without the “huge cleavage in which everything hangs out,” he adds.

Rosenfeld, whose line includes several mix-and-match suits with straight skirts and a modified cutaway jacket in light, more casual fabrics, finds that certain women sometimes feel her designs cover them up too much, making them feel unsexy. For now, most of her customers are primarily professional women who “know they have to dress appropriately and that jeans just won’t cut it,” she said.

“Women in Israel are becoming more aware, of brands, of styles, than they were 20 years ago,” said Elian Stolero, a French-born designer who also has an atelier on Dizengoff Street, Tel Aviv’s first fashion avenue. “Tastes are changing and slowly improving, but there are women who don’t know how to do that. Some women always want to feel and look younger.”

Veteran designer Gideon Oberson, who designs swimsuits for Gottex but still offers his own couture line of clothing, thinks it’s just a matter of trends. This spring, said Oberson, with the dress the most important wardrobe item, it’s a completely feminine look that “young Israelis will get, while older women might still stick to pants.”

At the same time, “things are changing,” said Oberson. Israeli women are finally moving toward higher waistlines and “the Israeli street gets that.”