It’s just past 10 p.m. in a Pratt Institute workroom, and Sophie Andes-Gascon and Claire McKinney have arrived from their day jobs to begin sewing charms and knitting fisherman yarn for their fashion week entrée.

On Sept. 12, the duo — longtime collaborators of downtown label Maryam Nassir Zadeh, earning them status in a niche circle of art-leaning fashion folk — will launch their own label, SC103, with a show to be held at a gallery space in Greenwich Village.

Former classmates in Pratt’s fashion design program and current roommates (103 being their building number), McKinney and Andes-Gascon began working on the collection last July out of their apartment. So eager to make their mark, they had already finished two racks worth of designs, with models cast and fitted, by the six-week mark. 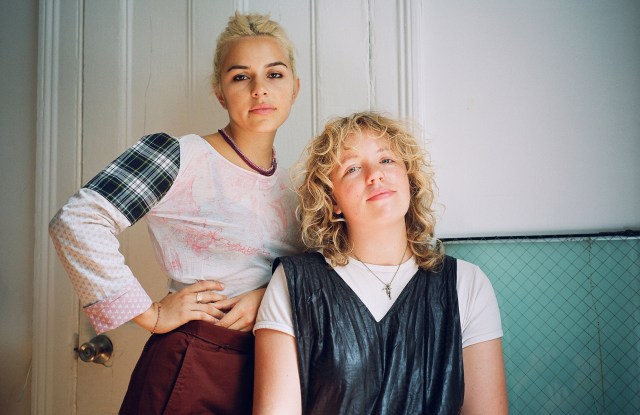 As the hours begin to creep late into the night, Andes-Gascon and McKinney buzz along. “This is the 7 p.m.-to-2 a.m. gig, it’s been the most fun we’ve had in a very long time,” said Andes-Gascon, who spends her days working on the design team at a contemporary bohemian New York label. She and McKinney have long created runway designs in collaboration with Nassir Zadeh. Independent designs by Andes-Gascon are sold at MNZ and Eckhaus Latta’s boutiques in New York and Los Angeles. While McKinney works in-house for Nassir Zadeh on the brand’s production, she also issues her own work that is intermittently sold at the pop-up franchise Café Forgot.

Their new label — with its patchwork, custom-dyed fabric and freeform shapes — demonstrates a certain resourcefulness, enlisting odds and ends of upcycled material, leather and beading. Designs fall in line with the DIY movement. But SC103 sets itself apart from that pack with a certain artful femininity.

McKinney is known for her architectural approach to everyday staples and Andes-Gascon for her patchwork and delicate beaded embellishments. In joining forces the duo appears to have found a  synchronicity, with Andes-Gascon bringing “the color sense, texture and composition. Those are the things I know well. Claire is so good at structure and all the utilitarian pieces — if I had made this collection, the whole collection wouldn’t be grounded with darker elements. The textile development is really both of us,” she said.

There is a strong juxtaposition between the hard and soft, the wearable and fanciful. A black laminated sweatshirt, stiffened with translucent plastic, is embedded with pressed wildflowers. Dark-wash stovepipe jeans sit alongside madras patchwork chore dresses with delicate hand-beaded hearts on their sleeves.

A haphazard pink marbled textile that enlists Ebru, a traditional papermaking technique that originated along the Silk Road in the 15th century, was developed in the designers’ shared bathtub. Its fabrication process, however, had to be adjusted to suit the constrictions of a New York City apartment. “Traditionally you would make five foot by five vats and I’m doing it in a little bucket in the bathtub; people think it’s kind of crazy,” said Andes-Gascon. “I feel, though, that you can’t achieve the mistakes that I love on this by doing it the right way.”

“My mom says you can see a little bit of every project in our bathtub,” added McKinney.

Their shared outlook on femininity comes from a place of “Strength — clothes for women that are self-assured, unseated and powerful. There’s also a spirit of lightness we want to capture; we feel an openness and freedom to this collection.”

SC103’s designs will retail from $50 to $1,500, with the average piece priced around $450. That said, “It’s not a goal for us to sell everything in the collection,” explained McKinney, who noted that she and Andes-Gascon will likely produce any retail orders by themselves.

“I think the most sustainable company is no company at all and a lot of issues I had with staging a show were, ‘Why do we need another brand?’ We don’t, but this is just our expression,” said Andes-Gascon. “We just need to be careful and conscious of who we are selling to, why we are selling, and how many we make.”