New Designer Spotlight: We Were Once Fiends

Alexandria Berntsen’s tomboyish women's collection, We Were Once Fiends, made its debut for fall 2014, but the New York-based designer is no novice. 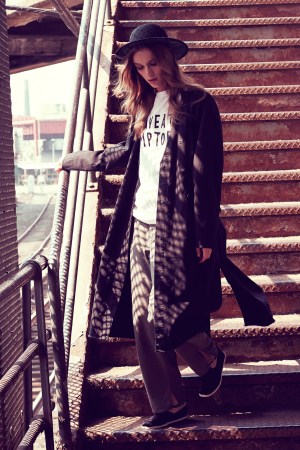 Alexandria Berntsen’s tomboyish women’s collection, We Were Once Fiends, only made its debut for fall 2014, but the New York-based designer is no novice.

After graduating from the Fashion Institute of Technology in 2006, Berntsen worked briefly for Rachel Roy and then spent seven years at Jen Kao, joining the team in 2006 before the label made its official launch at New York Fashion Week in September 2007. “Her line was high-end and we did a lot of complicated things there,” said Berntsen, who was eventually appointed design director before the brand shuttered in 2013. “When Jen closed the company, I was like, ‘What am I gonna do now?’ I thought, hey, might as well go for it. I didn’t want to get another job because I had years and years of development experience and an idea for a brand, so I decided to give it a shot.”

When she launched We Were Once Fiends with a capsule collection and a small presentation in Brooklyn, Berntsen knew she wanted her aesthetic to be rugged, denim-focused and tightly edited. Designed and produced in New York with fabrics sourced from Japan, the collection’s main influences are men’s street and workwear, she said. Now in her fourth season, Berntsen has opted to sit out of New York Fashion Week and focus instead on strong campaign imagery and expanding into new retail outlets via the trade show circuit.

“It’s utilitarian in terms of silhouette, construction and textiles,” Berntsen said of her line. “We focus on basics, denim and workwear with a lot of washing and dyeing treatments.” Those techniques, such as an ombre effect on cropped straight leg denim jeans, give the looks a slightly deconstructed feel. For spring, Berntsen also cut the collars off all of her denim and cotton linen jackets, which are done oversize with a slight military vibe. Other denim looks are noteworthy for their unique color washes, like a dusty purple hue for spring.

As for the brand’s moniker — Berntsen didn’t want the label to bear her name — it all started with a typo. Her boyfriend had noticed a spelling error in an article he was reading — the sentence should’ve read “we were once friends,” but it had been printed as “fiends” instead — and they both liked the phrase’s double meaning. It’s occasionally abbreviated as WW1F.

Ranging from $130 for T-shirts up to $650 for outerwear, We Were Once Fiends currently counts American Rag in Los Angeles, Desperado in Tokyo and online shop Lust Covet Desire among its stockists, and has also been sold at Assembly New York and on Guild in Los Angeles in past seasons. For spring, Berntsen launched a line of hats designed in collaboration with designer Frenel Morris of Still Life millinery, and she’ll be representing the brand at the Woman trade show in Paris from Oct. 2 to 5.