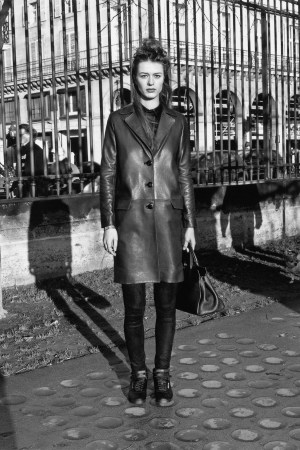 Call it a French connection. On a recent phone call — in a thick accent true to her native France — Paola Russo, the cofounder of Los Angeles luxury concept store Just One Eye, was singing the praises of the young Parisian designer Aurélie Larrousse. Under Russo’s guidance, the Paris-based Larrousse, 28, heads Beau Souci, a label that launched exclusively at Just One Eye last year and just wrapped its third season for fall.

“I believe she has real talent,” Russo said of Larrousse. “People want something to wear that is comfortable, but elegant and different at the same time, and with Beau Souci there’s this homage to punk. Aurélie uses a lot of piercings everywhere — this is totally her style. There’s a cashmere turtleneck with some piercings on the sleeves. It’s something that anybody can wear, from age 18 to an older woman…elegant, but it has this little edge.”

Beau Souci isn’t Larrousse’s first stab at design. Back in 2011, she launched her own brand immediately upon graduating from Studio Berçot in Paris. Equal parts medieval and futuristic, the collection, called Aurélie Demel, specializes in leather, fur and more unexpected fabrics, such as chain mail. Sold at Farfetch and L’Eclaireur in the past, it’s still available at Just One Eye. The prices are high — a top in the aforementioned chain mail retails for $13,000 — though they certainly reflect the line’s craftsmanship.

Now concentrating on her new label, Larrousse continues to push an edgy aesthetic, but with more of a rock ‘n’ roll vibe. Informed by the chic sophistication of Paris fused with the cool, effortless vibe of L.A., Beau Souci’s collections range from understated to glamorous: think leather and suede jackets, silk tie-neck blouses, floaty chiffon leopard-printed dresses and sequin-covered tops. For fall, Larrousse focused on punk culture (hence, the piercing embellishments). “I also find inspiration in icons that I admire, street style, artists from the 20th and 21st centuries, as well as new people I meet in my life. I always try to create clothes that I want to wear myself,” she said. “With every season, [there’s] a new story to tell.” She described the Beau Souci woman as funky and hard-working, “but she also likes to party and enjoy life.”

Since its debut at Just One Eye, the label has slowly expanded to more doors, including Bergdorf Goodman, which gave it a pop-up shop during the last New York Fashion Week and also picked up the fall collection. Retail prices range from about $210 for tops to upwards of $3,000 for suede, leather and fur pieces.

Beau Souci will collaborate with Newbark on a capsule collection of footwear for spring, and its designer hopes more partnerships are on the horizon. “I would like to collaborate with different artists — dancers, painters, filmmakers. Paola and I share this vision,” Larrousse said. “The sky is the limit!”