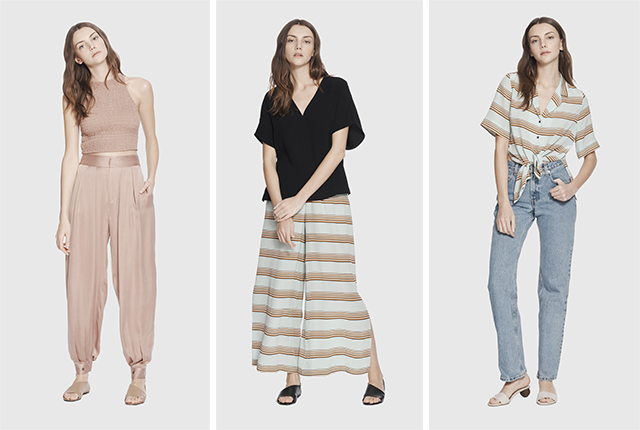 Sometimes, a sabbatical is all it takes.

That was the case for Nicole Heim, who launched her New York-based label, Cienne, following a three-month excursion to the mountains of Ethiopia.

The impetus for a trip to East Africa? Heim had just quit her long-running job as a designer at Victoria’s Secret. “I was with the company for a long time, when they still had their direct [catalogue] business, and I became frustrated,” said Heim, admitting that she had completely sworn off the fashion industry. “I wanted to have a little more purpose in my work. I was also spending a lot of time in factories overseas and I started to see the impact of large volumes of product….I was like, ‘How far can I get away from fashion?'”

The self-confessed travel junkie had always been drawn to culturally immersive experiences and fled New York for Africa in search of ways to explore the integration of design and business in more meaningful ways. “I was mostly volunteering with water charities, and then I stumbled upon this old couple weaving and prepping their looms,” Heim said. “After seeing fabric handmade in the same way it had been done for centuries — a contrast to the mass production [I had witnessed] firsthand — I felt a sense of appreciation for their craftsmanship and attention to detail. That was the seed that planted it all.”

Heim returned to New York to research artisan groups, ones that would be able to adapt their skills to modern design aesthetics, and began piecing together ideas for a new brand, which she launched during the summer of 2015. “I wanted to build a meaningful supply chain, sourcing all over the world — whether natural silks from India or handwoven cottons from Ethiopia — going back to a more thoughtful mentality,” Heim said, noting that the entire collection is manufactured in small batches in New York’s Garment District, with the exception of sweaters, which are hand-knit in Bolivia and Mongolia. “And I wanted to build sustainability and ethics into the company as how we operate, and not necessarily as our marketing message.”

Cienne produces two collections a year and has been primarily a direct-to-consumer business — save for pop-up shops and trunk shows here and there — but plans to open up the brand to wholesale stockists for fall 2017, which marks the brand’s fifth season in business.

“The collections are pretty edited, and we focus on classic silhouettes that can be mixed and matched, diving deep into print, color and fabrics,” Heim said, noting she often looks to antique textiles for inspiration.

The brand’s recent spring 2017 collection hits on current silhouettes — think cropped bell-sleeved blouses, ruffled one-shoulder tops and front-slit flared trousers — in silk crepes, jacquards and linens sourced across Japan, India and South Korea. Inspired by sun-baked northern California in the early Seventies, the collection features a washed, blush-toned palette punctuated by stripe and sand motifs. The looks are priced from $250 to $1,000, with the sweet spot around $350 to $500.

Heim credits the label’s Instagram account, @cienneny, as well as word-of-mouth and a high repeat-customer rate as the main tenets of the brand’s success thus far.

“The overarching thing customers are responding to is the quality across the board — even in terms of things like our web site, which I never thought people would notice as much as they do, but we put significant time into it,” Heim said. “It’s about making sure we stay thoughtful in every aspect, from product to branding to [customer] experience.”