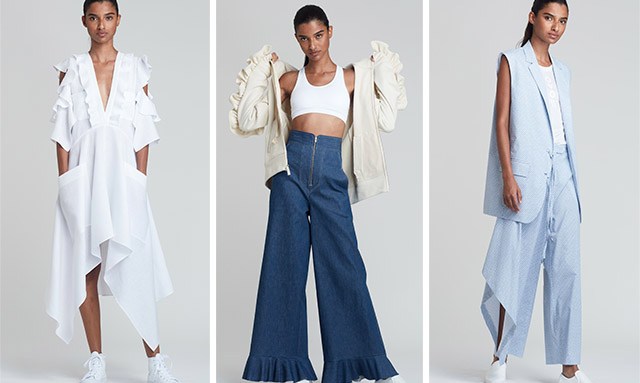 Sometimes it takes a few tries to get it right.

That was the case with Ovoll, a new label designed by Moon and David Mitchell. The husband-and-wife team launched their New York-based label last fall but, when shopping around the debut collection, were met with wary buyers. “The feedback was that we were a little too avant-garde, a little too oversize,” David explained. “The market was more conservative than we had anticipated.”

So they went back to the drawing board and tweaked their aesthetic. Ovoll is back for spring 2017 with a new direction — still confident, still modern, but this time with a little more romance. “Feminine and edgy are the overarching themes,” David said. “It has a real New York vibe, though Moon’s background is mostly European.” (The name Ovoll is a wordplay on zero-five-zero-two, meant to symbolize the date Feb. 5 — David and Moon share the same birthday, and, even more uncanny, they both have identical twin siblings.)

Moon, who takes the lead on design — while David, with a background in finance, investment and management consulting, is the chief executive officer — has a lengthy fashion résumé, starting her career at Courrèges in Seoul and later moving to Paris to attend the prestigious ESMOD school. Graduating first in her class, Moon interned at Chloé under Stella McCartney’s tenure and then moved to Givenchy. She eventually relocated to New York and held stints as the head designer at Vivienne Tam, Rachel Roy and Ports International.

Manufactured in New York, the spring Ovoll collection, which averages about $1,000 to $1,200 at retail for dresses, is made from fabrics including cotton voile and denim sourced across Italy, France and Japan. It embodies a relaxed spirit with colors and prints inspired by the couple’s monthlong summer vacation on the French and Italian Riviera. Ruffles are central to the lineup’s ethos: They trim the hemlines of cropped, wide-leg denim jeans or cascade down sleeves, as in one zip-up sweatshirt nicknamed the “dragon hoodie” because of its reptilian resemblance. Dresses — a few featuring colorful floral prints, or riffing on shirting — feature side cutouts, asymmetry and elements of deconstruction.

“It’s very feminine — but it’s a different kind of ruffle,” Moon said. “For fall, I’ll keep the ruffles but I’ll add a Seventies vibe — not vintage Seventies, but a new, evolved take on Seventies, with some patchwork.”

Noting a round of positive feedback from buyers on Ovoll’s rejiggered aesthetic, the duo has confirmed online retailer Avenue 32 for spring and hopes to hold their first fashion show within the next year.