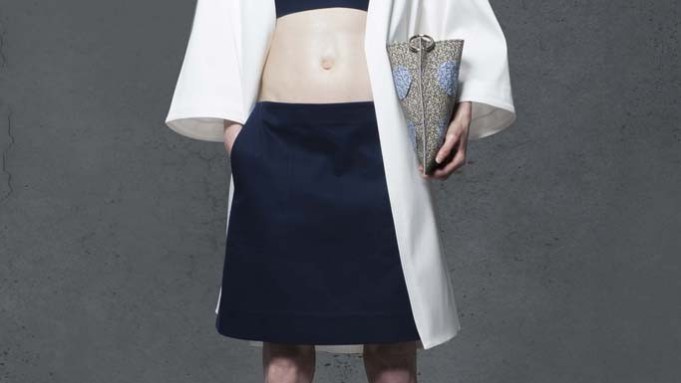 Chelsea Goldman has accrued some impressive bullet points on her brief CV. A native New Yorker, she attended Central Saint Martins and received her B.A. in women’s wear from London College of Fashion in 2012. There was the undergrad internship at Narciso Rodriguez; a stint at Céline, first as one of Phoebe Philo’s personal assistants, then in the design studio; followed by a very short time on the clock at Proenza Schouler. For spring, she has launched CF. Goldman, a contemporary collection that combines the statement minimalism Goldman clearly absorbed from Rodriguez and Philo — the latter’s influence is more obvious — with a light artisanal side.

Generously cut tunics with kimono sleeves, oversize judo belts and wide-leg pants reference the martial arts, while laser-cut dots, as cutouts on maxiskirts and embroideries on bags and dresses, allude to the work of Damien Hirst. Liberty prints are quilted on cropped bodices, boxy shirts and short skirts. It’s a directional look for the contemporary market, with prices set at $250 for a cropped bodice, to $1,200 for some of the faux suede pieces — everything is produced in New York. The spring collection will be sold at Assembly and In Support Of in New York; Clementine, Boston, Mass., and Nass Boutique in Kuwait, among others.

“Because I worked at Céline and studied in London, I was most excited to bring this London energy and European style to the collection,” said Goldman. “In London and Paris, it’s all about quality and craft. I wanted to have that craft element and also high design at a contemporary price.”