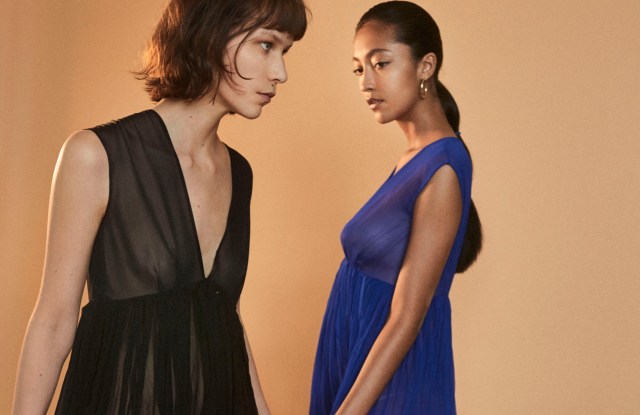 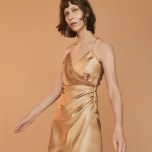 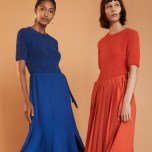 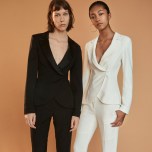 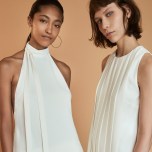 Marina earned a degree in fashion degree from The New School’s Parsons School of Design and started working for Total Management, where she was an agent for photographers and stylists. “I graduated Parsons during the recession, and designers weren’t being hired,” Marina said. “At Total, I met people who I work with in the industry now [as a designer]….It ended up giving me a 360-degree perspective of the fashion business.”

Two years later, Marina landed a design gig at Peter Som, eventually becoming the brand’s design director. She spent four-and-a-half years at the company before breaking out to launch her eponymous label last spring, all of it made in New York using Italian fabrics.

“We’re Italian, and we grew up a lot spending our summers in Italy, where our father is from,” Marina said of her and her sister Francesca, who focuses on business and production side of things. “For the first collection, I was thinking a lot about our girl and who she is. She’s independent and strong — and she works all year and summers all summer. That’s the life we all want to live, right?”

Indeed, the debut collection embodies modern, relaxed elegance with an emphasis on tailored suiting — fits are a top priority — as well as soft pleated skirts and crisp cotton shirtdresses. Spring includes pops of royal blue and blood orange as well as a series of golden metallic ribbed hand-knit dresses and silk lame pleated dresses inspired by the sunsets in Positano.

“A lot of the pieces translate to this cool sense of luxury,” Marina said during a walk-through, motioning to a cognac suede wrap dress with a plunging neckline and a trenchcoat to match. “It can be worn for day with a brogue or at night with a chunky heel for something sexier.”

The collection will launch in January via the label’s e-commerce site, Marinamoscone.com.