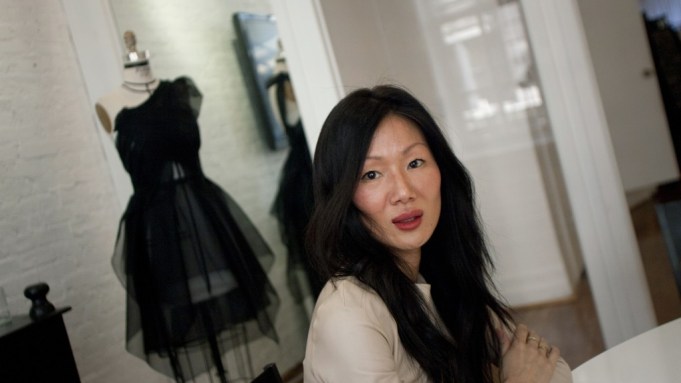 On an oppressively hot June afternoon in New York City, Marissa Webb’s 11th Street studio is an oasis of calm and cool, so much so that she’s comfortable in a long-sleeve leather tunic. Just six months into her new venture, Webb’s setup bears none of the chaotic energy or ad hoc decoration of the typical new designer studio. Everything — chandeliers, a vintage typewriter — is in its place, and looks like it has been for years. Webb can’t help it. “My nickname is shark,” she says, sipping a Red Bull. “Sharks by nature will die if they stop moving.”

For spring, she’s launching the Marissa Webb Collection, with a presentation during New York Fashion Week. While this is her first independent line, Webb is not new to the business. J. Crew loyalists might recognize her as the former head of women’s design for the company, where she became increasingly visible as the face of the women’s collection. She joined the brand in 2000 and stayed through its transformation from sleepy prepster standby to phenomenon of the relatively accessible fashion world before she left in 2011.

The breadth of Webb’s new collection — done in Italian fabrics, French lace and luxe leathers — includes skinny cargo jeans, tie-neck blouses, boyish blazers, a leather moto vest with a cutout yoke and plenty of ethereally layered silk skirts and dresses. “I have a tutu obsession,” says Webb. The tomboy and girly-girl dichotomy is a familiar one, often associated with Webb’s old stomping grounds. “A lot of people ask me, ‘Will your collection look like J. Crew?,’” she says. “The honest answer is, in my mind, no. But after being at J. Crew for 11 years, a lot of my own personal aesthetic is in J. Crew because that was my job. The same things that influenced me then influence me now.”

Webb’s collection has an edgier attitude, with a few more overtly rock ’n’ roll pieces interspersed with the feminine stuff. It’s also more upscale, priced above contemporary — wholesale prices range from $125 for a T-shirt to $325 for a blazer to $1,500 for limited-edition dresses.

Prior to J. Crew, Webb, who studied at the Fashion Institute of Technology, worked at Polo and Club Monaco. But she’s quick to admit that her lengthy time at J. Crew has put her at an advantage, having already overseen accessories, collaborations, the color lab and embroideries for a corporate design firm. “It’s definitely helped in this venture,” says Webb. So are the connections she made through the years. Bedrock Manufacturing, Co., the Dallas-based company that also holds Steven Alan in its stable of fashion ventures, has a minority stake in Webb’s business. Steven Alan, in turn, is handling Webb’s sales.