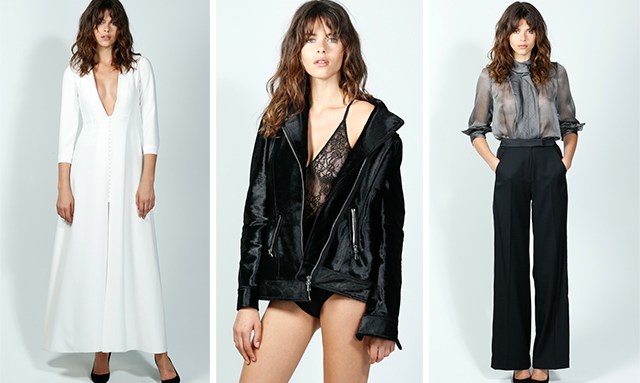 RD Roth is Irene Roth’s second act. The Los Angeles-based designer spent the first part of her career in the film business, working in marketing for Sony Pictures, with the “Spiderman” and “Charlie’s Angels” franchises among her big projects. Marriage to Hollywood producer and former chairman of Walt Disney Studios Joe Roth and motherhood prompted a change of direction. “As a mom, what is worth me being away from my children?” said Roth, who has no formal design training, but grew up around fashion production. Her own Korean-born mother worked in sewing factories in Los Angeles. “I didn’t study fashion, but it’s something that I love to do,” said Roth. “It’s the one thing that I feel I actually have a point of view on.”

Roth’s concept is relatively simple: tailoring-based clothes for the metropolitan working woman with tomboy edge and a subtle seductive side. Fabrics are Italian; production is in New York. Roth wants price to be her key distinguishing factor. “There are amazing, beautiful choices out there,” she said. “I don’t want to spend $4,000 on a coat. At the same time, I don’t want to shop on the contemporary floor.” Mostly executed in black-and-white, the collection includes moto jackets, tuxedos, plain blouses with subtle ruffled collars and a long-sleeved dress with a flirtatious plunging neckline. Prices range from $350 to $2,300.

Four years in the making, the collection launched softly for fall on Roth’s own direct-to-consumer e-commerce platform. Well aware that there’s a learning curve, especially for someone with a fashion background, she’s has taken a baby-steps approach to the business.

She has her fashion and Hollywood connections, too. Jennifer Lopez has worn pieces from the first collection and Gilles Bensimon shot her look book. Still, Roth aims to start small. “It’s more important to me where the collection sits and how supportive a store is going to be of me and the product, than how many doors I could get into,” she said.