Façonnable is returning to its roots for its spring-summer collection. 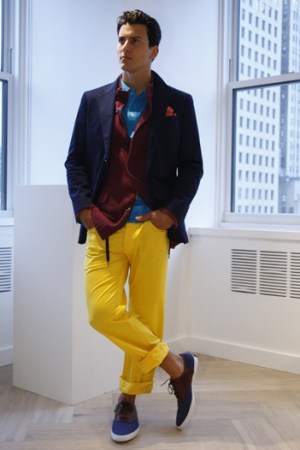 Façonnable is returning to its roots for its spring-summer collection.

Under artistic director Eric Wright, the Nice, France-based brand has turned to the Cote d’Azur of the Thirties and Forties for this season’s inspiration. “This brand is all about color, so I said, ‘Let’s go for it,’” said Wright. The collection offers an array of hues for both men and women, ranging from navys and bright yellows to a variety of reds. By being mixed with earthy neutrals, the offerings are designed to pop on the sales floor. Men’s offerings run the gamut from traditional dress shirts, pleated shorts and eye-catching polos to more-subdued sport coats, while the breezy women’s lineup included checked shirtdresses, filmy sweater vests and loose trousers.

Wright referenced painters including Matisse and Picasso in his designs and included soft fabrics such as linen, cotton and silk that are wrinkled and comfortable. “That’s the way people dress in the summer on the plaza and we wanted to show that effortless feeling,” he said.

Wright, a former design assistant to Karl Lagerfeld, is one of several new hires at the label. Now owned by M1, a diversified, family-owned company based in Beirut, Lebanon, former Kenzo chief executive officer Alberto Lavia was tapped last year to serve as the label’s president and ceo; Lance Isham, formerly Polo Ralph Lauren Corp.’s vice chairman, came on board as executive chairman, and Bob Green was named president of North America.

Green noted that in the past year, the brand’s goal has been threefold: to open its own retail stores; continue to grow its business with Nordstrom, which remains its largest retail partner, and grow the wholesale distribution. Stores opened over the summer in South Coast Plaza in Costa Mesa, Calif., and Atlanta, and a San Francisco unit is scheduled to debut on Nov. 1, he said.

Expanding the wholesale distribution has also been successful, Green added, noting the brand will be offered at 40 retailers for spring — 38 specialty stores as well as Saks Fifth Avenue and Bloomingdale’s. “They saw color and understandable, affordable and wearable clothes with prices right at the sweet spot.”

Green said that going forward, Façonnable will work to strategically increase its wholesale presence. “We’re not going to do this too fast,” he said. “We’re looking city by city at the best specialty stores, and we know that adding Saks and Bloomingdale’s will complement our Nordstrom business.”

The line is 65 percent men’s and 35 percent women’s, a number Green said will remain for the next one to two seasons, “but we believe the women’s business has much more potential to develop,” he said.