Reference Berlin, a new 24-hour festival for fashion, music and art that tries to capture the city’s creative allure opened with much ado on Saturday noon.

BERLIN — This city’s artistic energy has almost become mythic — yet no fashion venture has managed to capitalize on its creative buzz. Communications agency Reference Studios, with the support of 032c magazine, set out to change that with a 24-hour festival themed “Working Out Loud” that was aimed at fostering collaboration and community sense. Kicking off with a dinner cohosted by Gucci at the members-only China Club on Friday evening, Reference Berlin Festival opened its doors on a sunny spring Saturday.

Reviving an abandoned car park in the hip-but-still-edgy Neukölln district that has long been a popular spot for local graffiti artists, the organizers set up a series of music, art and media installations, spanning three vast parking levels.

Opening with a reflection on surveillance by Highsnobiety, the journey continued with installations from different fields. There was a light ensemble by Canadian-German design manufacturer Bocci that matched the unusual space beautifully; a preview screening of photographer Matt Lambert’s campaign for Comme des Garçons Perfumes’ upcoming 25-year-anniversary line “Clash” (with a sneak sniff of the three new perfumes), and works by visual artists like Julian Sellmeister, sparked by occasional performances by, among others, French-Danish design artists Ortamiklos with costumes by Martine Rose presented by Berlin’s Functional Art Gallery and a robot band One Love Machine Band by artist Kolja Kugler. 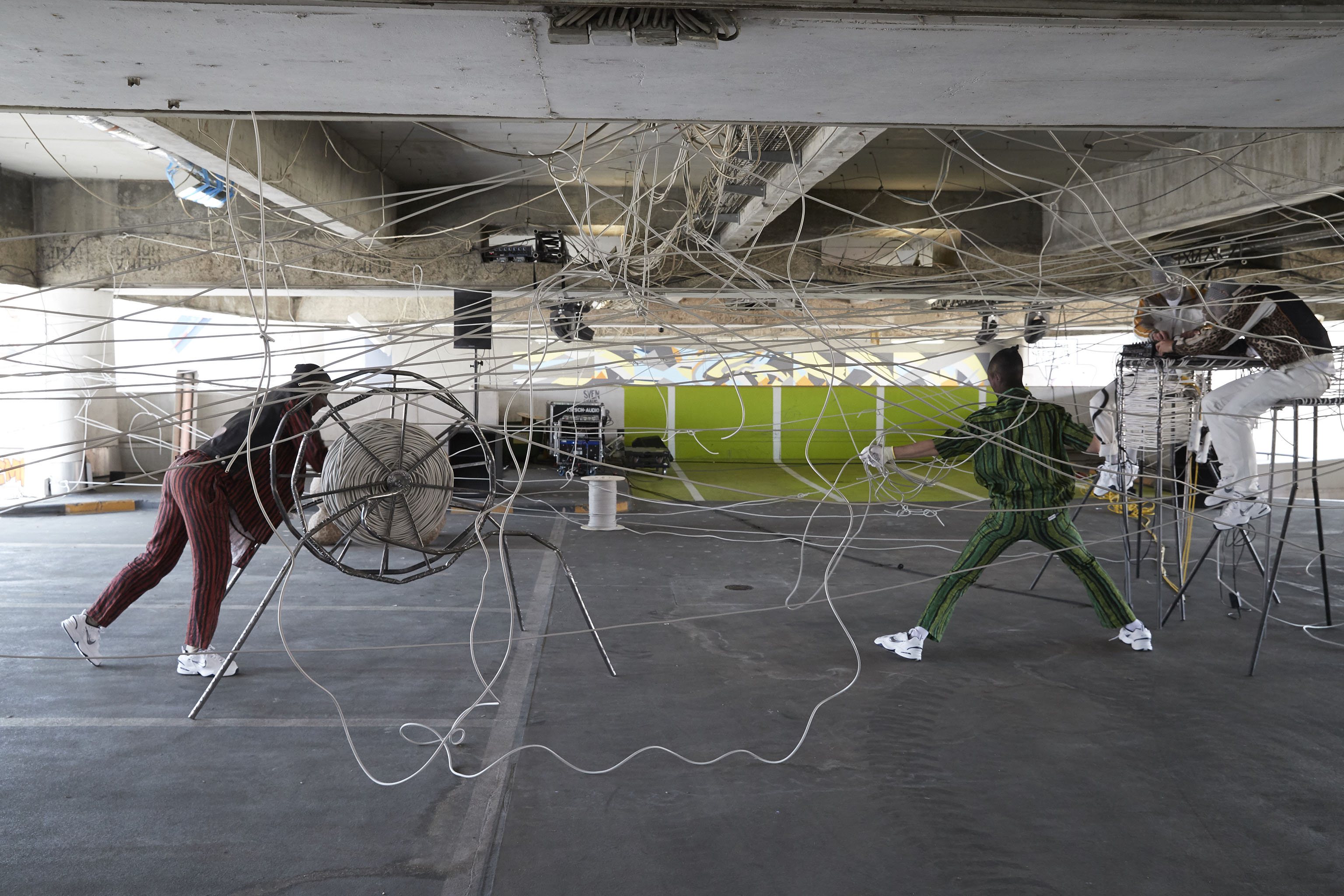 While traffic was easy, it was difficult to navigate — and locate — the cornerstones of the festival, and opinions diverged both among visitors and participants.

“The space is spectacular and I like that you can venture around and explore things on your own. I think this is a really exciting event and the mood is good and relaxed, just like the city,” one visitor said.

Michel Gaubert, who presented a presentation of images from his Instagram account, was also optimistic about the new festival: “There are amazing creative people in the city and Berlin is ready to push things,” he told WWD. 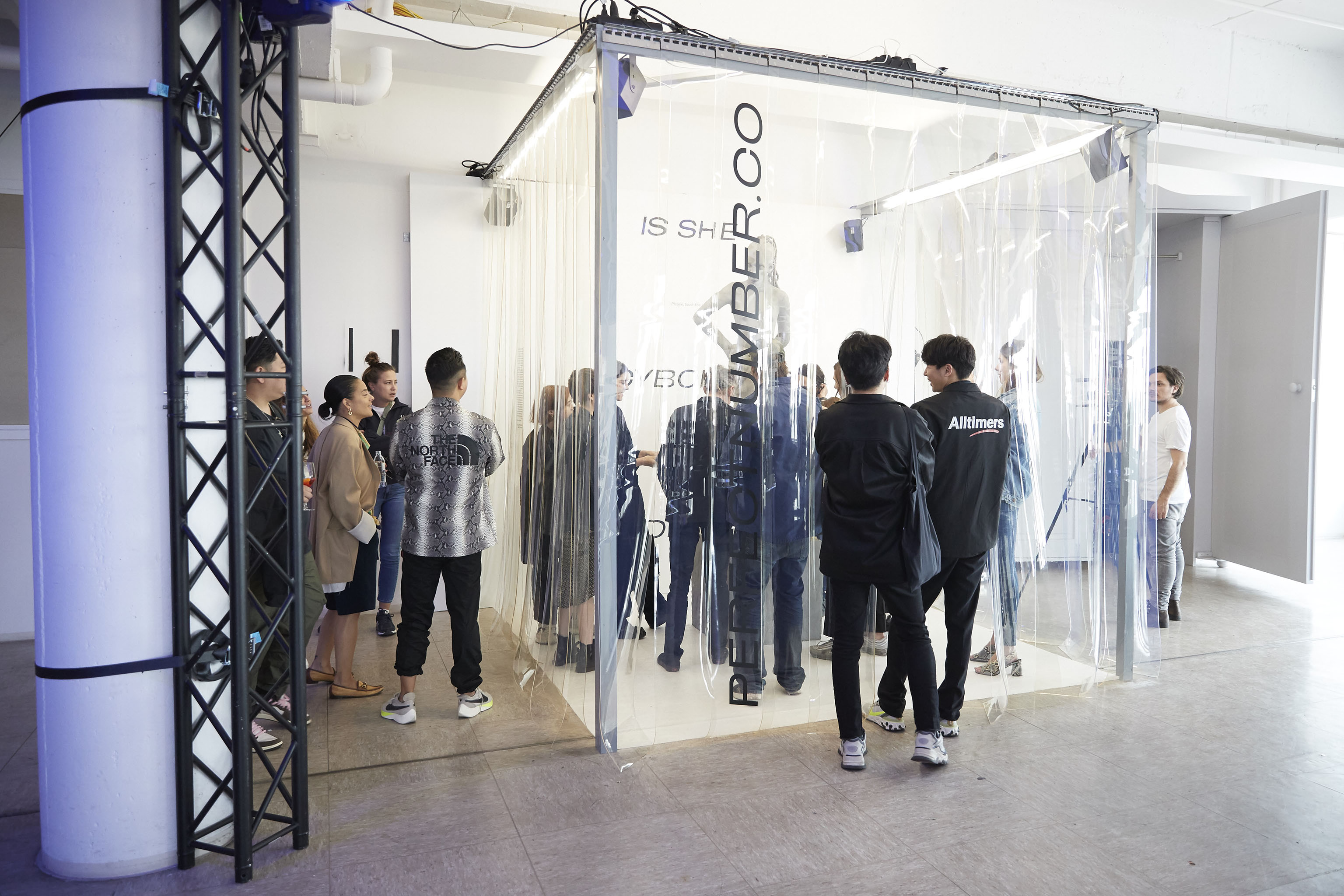 “Is She a Cyborg or a Goddess?” installation by Perfect Number.  Sebastian Reuter/Courtesy Photo

Some attendees, though, found the format difficult to navigate. “It’s completely incoherent and confusing. You can’t find your way through the installations and it seems to be very unorganized,” a guest complained.

As the fashion industry is curious for new forms of presentation in face of ongoing debates about the sense of fashion weeks, the festival also drew professional visitors on the hunt for new possibilities.

“I think the idea is great and Berlin and the fashion industry really need a new platform like this one, but they really need to work on a more professional execution,” a fashion photographer told WWD.

Gentle Monster, which will open a store in Dubai at the end of the month and is working with Beijing’s SKP on a new retail concept, was more positive: “We had a lot of interesting conversations and we’re very happy. We’re expanding the European market and only have physical presences in London and Paris at the moment, so this is a very good occasion. It’s as much an experiment for us as it is for Reference Studios,” said the brand’s U.K. director Gary Bott.

“In the sense of ‘Working Out Load,’ we want to create a platform where people from different fields work together and share their knowledge to create something really new and innovative,” said Mumi Haiati, founder of Reference Studios and the festival’s initiator.

Originally unveiled a year ago, Reference Berlin changed the dates and the concept of the event. Names like Grace Wales Bonner, Stefano Pilati and GmbH who were originally announced as participants did not take part, although Pilati did attend, while Hans Ulrich Obrist, curator of the Serpentine Gallery, contributed only via video call.