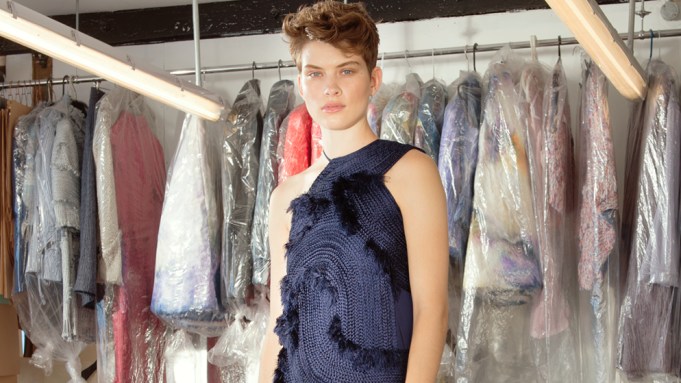 SHANGHAI – A group of young Chinese designers known as the “Gang of Six” ventured abroad to study before returning to their homeland to start their own fashion brands. Today they are considered some of the country’s most promising design talents.

Angel Chen, Daniel Xuzhi Chen, Momo Wang of Museum of Friendship, Mushroom Song of WMWM, Xiao Li, and design duo Liushu “Shu Shu” Lei and Yutong “Tong Tong” Jiang of Shushu/Tong, make up this cadre of 20-something design talents. Their names are becoming increasingly familiar to Chinese fashion watchers, whether they are scanning the schedule at Shanghai Fashion Week or flicking through the racks at multibrand boutiques in Shanghai, Beijing, Shenzhen and Chengdu.

“It’s a new group of talented Chinese designers, it’s like people used to look at Antwerp. It started with the consumers and the retail and e-commerce boom and then the creative side also comes up. Now Chinese designers are in a market and a position where they can really push the boundaries,” said Angel Chen, who studied at Central Saint Martins before moving to Shanghai to launch her eponymous brand.

These emerging designers aren’t simply lumped together because of their age group and education at prestigious schools like Central Saint Martins and the London College of Fashion. They often show together at showrooms both in China and abroad, and in many cases, help each other out — literally as they each chart a path to creative and commercial success.

“Take my show at Shanghai Fashion Week, Shu Shu [Lei, of Shushu/Tong] was my receptionist, Angel [Chen] was helping me with sewing. I don’t have a studio in Shanghai so I was using them to finish the whole collection,” explained Daniel Xuzhi Chen, whose brand, Xu Zhi, has won acclaim for its clever textural elements. “We are in the same industry, facing the same challenges, with the same opportunities and threats and we are all aware that we need to help each other.”

The question of whether there is a sense of competition among these young designers splits the group, though all agree that even when they do get competitive, it’s a positive impetus to push themselves to achieve more.

“We are really good friends, we always show in Paris and in Shanghai together, we have dinner, and even buy and wear each other’s clothes,” said Yutong Jiang, one half of the design duo behind the Shushu/Tong brand. “Of course there is competition, but it’s competition in a good way. When you see others doing something good, it will push you to do something better.”

One thing these young designers are in agreement about is the importance of their international experience and fashion education in London and venturing out of China.

“I wanted to go to London because the feeling there is different. In China they don’t have the same culture of art and fashion exhibitions and they don’t really have a culture of fashion. In places like London and Paris, I can discover things that are unique and different,” explained Mushroom Song of WMWM.

For designer Xiao Li, her years spent studying in London were important for two fundamental reasons: one was to develop an identity independent from her family in China and the other was to gain an international insight into creativity.

“When I was in China, my parents took care of everything for me, but when you go overseas you become more independent; when I went to London I had to take care of myself,” Xiao Li said. “In London, designers are encouraged to have a more creative mind. A designer in China has a more business mind. It’s a different focus.”

This international experience obviously has many benefits, but it also leads to questions about each brand’s identity as a “Chinese” versus “international” label.

“I’m fine with people thinking about me as a Chinese brand, partly because I really want to support Chinese culture; you can see on my clothes, there are lots of references to Chinese culture and history in my clothes,” Angel Chen said. “I feel like this is part of my responsibility. I want to make Chinese culture more contemporary and acceptable for international audiences.”

Shushu/Tong’s Yutong Jiang said she and her partner would prefer to be known as “a brand based in Shanghai,” rather than a Chinese brand.

“We have been several places so I don’t define us as a Chinese brand in particular. We are based in Shanghai, but we go to Paris for showrooms twice a year. We want to be quite international,” she said.

Regardless of whether they are striving to be known as a “Chinese brand,” all of these designers have graduated within the past five years and chosen to return to China to launch their own brands. It’s a path that might seem unusual to a fresh graduate from Europe or the U.S., who might opt to work at an established brand before launching his or her own label.

But China is different – this isn’t a country for climbing ladders, but for building ladder factories. Fortuitously for this generation of designers, China is simultaneously experiencing a desire for independent design, a growing curiosity about local design, as well as a generation of millennial consumers who boast buying power unimaginable to past generations of Chinese consumers.

As the local fashion industry in China burgeons, so does support for local designers. What sets these up-and-comers apart from past generations of Chinese designers is a focus on building both a brand identity and a community of young consumers, according to Tasha Liu, co-founder of the Dong Liang chain of multi-brand boutiques in China.

“These designers have huge potential to go further, [because] they are building up a very healthy and direct linkage with their young consumers – not only like designer and client, but also friends,” she said.

Lane Crawford has taken notice of the trend and started carrying more Chinese brands at its stores.

“We saw something special in their collections and vision for their brand. They all have a very unique point of view and are extremely passionate about their work. There’s no magic formula; sometimes you see a collection and you just know,” said Lane Crawford buyer Jillian Xin.

Leaf Greener, a stylist and publisher of her own WeChat fashion and lifestyle magazine Leaf, said she thinks Chinese consumers are keen to buy the work of homegrown design talents.

“I think local buyers really support local designers, the showrooms here are booming because multibrand stores stocking Chinese brands are all over China right now. They are supporting Chinese talents and they seem to be doing a booming business,” she said.

As China’s fashion industry continues to grow and the market of consumers expands, these up-and-coming design talents will have even more opportunities to expand their businesses, observers said.

“I think there’s unlimited potential for many of these young Chinese designers; they are just getting started and establishing themselves. In five years, I’m confident that more and more will become household names in China as well as internationally,” Lane Crawford’s Xin said.

A closer look at the “Gang of Six”

A student of both theater and ballet, it’s no surprise that Shenzhen-born, Shanghai-based Angel Chen has leaned heavily into the dramatic in both her design sensibility and brand imagery since graduating from Central Saint Martins in 2014. Her collections are saturated with color, with references to both Asian gang culture and traditional Chinese poetry. The brand is stocked at Opening Ceremony, Lane Crawford, Joyce and H.Lorenzo.

After graduating from Central Saint Martins, designer Daniel Xuzhi Chen quickly set about establishing the Xu Zhi brand and has spent the past 18 months winning widespread praise from the industry internationally. He was nominated for the H&M Design Awards in 2015 as well as the LVMH Prize and Woolmark Asia Prize in 2016.

He is best known for his textile and textural innovations – twisting, braiding and bonding yarns into intricate garments with deceptively simple silhouettes.

Designers Liushu Lei and Yutong Jiang graduated from the women’s wear master’s degree program at London College of Fashion in 2014 and worked with Simone Rocha and Gareth Pugh, respectively, before returning to Shanghai to launch their own independent label in 2015.

The geek chic edge and sharp tailoring of the Shushu/Tong brand has attracted a young, hip consumer class, as well as retailers such as Lane Crawford, 10 Corso Como, H.Lorenzo and Opening Ceremony.

Another graduate of London College of Fashion’s master’s degree program, Mushroom Song finished her schooling in 2015 and launched her brand WMWM later the same year.

Her largely monochromatic collections often feature exaggerated length and width, and have already proven popular in her home market of China, as well as Dubai. The designer’s next aim is to target the European market.

Originally from Jinzhou, in northern China’s Liaoning Province, designer Momo Wang bought a sewing machine in her second year of a degree program in Art History and Management in Beijing, before her clothes-making hobby supplanted every other creative passion and Wang was accepted to Central Saint Martins.

Museum of Friendship was born in 2014 and is stocked by international retailers including 10 Corso Como and H.Lorenzo, as well as a growing number of Japanese boutiques. Already, a loyal young clientele is attracted to the brand’s fun vibe – with clothing that aims to encapsulate the carefree nature of childhood.

Xiao Li was born in the seaside town of Qingdao and moved to the United Kingdom to complete a bachelor’s degree at London College of Fashion and a master’s degree at Royal College of Art, graduating in 2013. That same year she won both the Loro Piana Award for Best Knitwear Collection and the International Talent Support Diesel Award. In 2015 Xiao Li was shortlisted for the LVMH Prize.

Best known for her oversized knitwear with decorative silicone features, imbued with both color and a sense of humor, Xiao Li is stocked at both Dover Street Market and Lane Crawford, as well as 10 Corso Como.