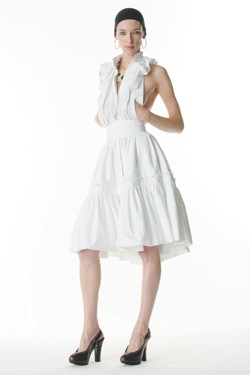 The power woman Stefano Pilati introduced for fall at Yves Saint Laurent is sticking with her tunics and tailoring for cruise, but she’s also taking on a bohemian air. The collection, Pilati says, “is more folkish — with a slight touch of ethnic.” The designer continued to play with bubble shapes and belted looks, and also added an urban flair with shorts, jackets and wide-leg pants that can be worn high at the waist or slung low. Meanwhile, Miuccia Prada was in an experimental mode at Prada, tweaking such classics as the trenchcoat, tuxedo and down jacket. At Miu Miu, she counterbalanced the girly with the sportif: Precious silks were mixed with cotton jersey and ruffles and sequins were tempered by leggings and Ts.