New L.A. Designers Look to Get Ahead in Paris

Two emerging Los Angeles designers who are already attracting plenty of buzz are now presenting their debut collections in Paris. 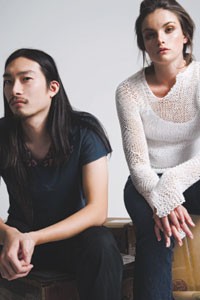 LOS ANGELES — Fashion week here is less than two weeks away, but two new local designers already attracting plenty of buzz are not waiting, instead presenting their debut collections in Paris after successful sales recently in New York.

Sure, he still wields the needles in realizing each organic shape. Knitted from cotton floss, cashmere or blends of cotton-silk and stainless steel-viscose, they are available in the spring 2006 collection wholesaling from $130 to $460 and are on view through this weekend in a suite at the Clarion St. James & Albany.

But now those are all prototypes.

Ong has teamed with the owners of Idea Generation, a downtown showroom with partners in Italy, to manufacture the line in factories there.

“I was moved by his aesthetics and sensitivity with these sweaters he made on his own,” recalled partner and rep Luciana Brancorsini, adding this is the first time IG has backed a designer. “His work reminds me of a stroke of a painter.”

Yet as interest increased, so did the limits on Ong’s production. “There’s only so much you can make on your own, by hand,” remarked the 27 year old, born in Hollywood of Philippine immigrants of Chinese descent. “And there’s only so much people will pay for a sweater.”

Ong and his new partners intend to make Ujein a lifestyle concern. Projected first-year sales under the partnership should reach $1 million, said Brancorsini. Already slated for fall 2006 is men’s and a secondary bridge collection.

It was in Denmark that Ong discovered knitting. There in 1999 on a foreign studies program for his architecture degree from California Poly San Luis Obispo, Ong learned the craft from the mother of his host family, and the hobby stuck.

After hours as head of the model shop for an architecture firm, Ong would knit and knit. In 2002, he left the day job and began selling scarves and sweaters to a couple of this city’s edgier shops, Aero & Co. and Xin, under the label Ujein — a play on his first name. Ong approaches knitting as a puzzle: “How to take rectangular strips and turn them into something that tapers the body.

“Knitting is a little more three-dimensional, something I can manipulate,” he adds. “I don’t know how to sew, so this allowed me to shape things into whatever I want.”

Maxfield and Weathervane here, and Blake in Chicago have written orders. Ujein is also represented in Milan at Vispa Teresa.

In the case of Thomas Wylde, the new offering by industry vet Paula Thomas, this is not just another such line.

At least that’s the consensus among buyers from Harvey Nichols in Hong Kong, Tootsies in Houston, Linda Dresner in New York and other retailers eager to get her buttery lambskin jeans and hardware-heavy oversized bags, or the slim caftan and whisper-thin scarves speckled with a cheeky skull print. Another custom print is of blood cells, blown out to abstract graphic.

Even before getting to Paris this week, Thomas adjusted projected orders to nearly $400,000.

“Believe me, there’s a lot of duplication in the market,” pointed out Sarah Stewart, women’s buyer for Maxfield and the first to buy the spring collection out of Thomas’ Venice, Calif., studio. “It’s hard to find a feminine, fresh collection with a rock feel. Paula achieved that — and with a particular point of view and beautiful quality.”

An emphasis on craftsmanship is obvious throughout Thomas Wylde, which has a classic bent despite its rock sensibility. A chocolate leather Victorian bolero with a wide satin bow can pair as easily with skinny, long-legged leather pants as with a gown. Spring’s Black Summer group wholesales from $57 for edgy, ultrathin T-shirts to $1,315 for tailored leather jackets.

Thomas is showing the collection through Tuesday at The Regina Hotel. The label is named for her Welsh grandfather Robert Thomas and great-grandmum Catherine Wylde.

The 40-year-old designer, who looks more Californian than British, has a storied résumé spanning two decades. During her early modeling years, she became friends with Julien Macdonald, a relationship that led from muse to right hand as Thomas served as show producer, sales rep and VIP liaison all the way to the designer’s appointment at Givenchy. In 2001, she partnered with Stefano Guerriero on two well-received collections; two years later she was back in Los Angeles, a city she popped in and out of over the years, she said, “whenever I needed grounding.”

A lap pool and lawn separates the studio and modern home she shares with her teen daughter, Harley, and it’s all just a stone’s throw from the workplace of her longtime friend, British jewelry designer Tom Binns. Most recently, Thomas styled commercials and guided designer Jenni Kayne through her first three seasons.

“But it was time,” said Thomas of her decision to finally do her own line. Last spring, she met a backer: Houston socialite Valerie Sarofim. So busy has Thomas become that she had to turn down an offer from friend Ridley Scott to wardrobe “A Good Year,” now in production and starring Russell Crowe. “I was gutted. But three months in the South of France with all these orders coming in? Impossible!”