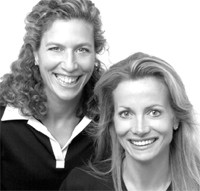 NEW YORK — Two mothers from Greenwich, Conn., have created their own activewear line, with the hopes of snazzing up the yoga pants and T-shirts that so many women like themselves wear as a daily uniform.

Called Material, the collection consists of everyday essentials made of performance fabrics designed to be dressed up or down. Amy Jurkowitz and Tina Mikkelsen initially met through their children and later volunteered to assemble an advisory board for Greenwich Hospital to make the community more aware of its pediatric and adolescent medicine. After devoting countless hours to the cause, they agreed they needed to develop a business plan to aid their own cause.

“American women tend to wear exercise clothes all day long,” Jurkowitz said. “They may be getting to exercise and they may not.”

Mikkelsen, who designs Material and is the fit model, said, “No one is looking good in athletic clothes outside of New York City. It’s the sad demise of daytime fashion.”

Both women earned MBAs — Mikkelsen’s is from Yale and Jurkowitz’s from Northwestern University’s Kellogg School of Management — and insist their idea stemmed from a business need. They analyzed the need for Material by developing a standardized grid of activewear brands. They concluded, “No one is doing fashion-inspired performance wear” that doesn’t skimp on coverage.

Their aim is to build the business steadily, developing items missing from women’s wardrobes.

“We’re not trying to blast this out,” Jurkowitz said. “We want to build it slowly.”

Before launching Material, they measured interest by hosting informal trunk shows in friends’ homes in tony Bronxville, N.Y., and Bryn Mawr, Pa. Instead of hiring a sales rep in the Midwest, they will have a trunk show at a friend’s home in Winnetka, Ill., with the hopes guests will ask Chicago retailers to carry the line, as has been the case in other places.

Razook’s in Greenwich tested the line with a trunk show, even though the specialty store doesn’t traditionally carry athletic-inspired clothes. Based on the enthusiasm and sales they generated, they offered a limited fall collection to Searle, Equinox Energywear, Canyon Ranch, Paragon Sporting Goods and other select stores. First-year projected wholesale volume is $500,000, they said.

For spring, it will be offered in 50 stores and in at least 75 for fall. The 24-piece line wholesales from $27 to $125 and is offered in sizes from extra small to large. Fabrics are sourced from France and Italy. Wide-legged pants with a zig-zag print, a white cotton tailored jacket, an orange mesh baseball shirt with hot pink sleeves and a white tennis dress with a vertical pink stripe are among the offerings.

“This is a true collaboration,” Jurkowitz said. “Tina will have amazing ideas and I’ll go run the eight miles [to test it].”

Mikkelsen and Jurkowitz work out of their homes and recently hired their first employee, an assistant. They plan to open an office in Greenwich this spring. Material hired Keri Levitt to handle public relations and marketing, but there are no plans for a New York showroom. Material’s founders prefer to pitch the line themselves. Retailers appreciate that the concept stems from needs in their lives, they said.

The company plans to continue to keep its production in the San Francisco and New York areas. The latter is close enough that they can show their children — Mikkelsen has two and Jurkowitz has five — how the process works.

“One of the great benefits is they can see us creating something,” Jurkowitz added. “It’s nice for them to see mom at work instead of going off to work on the train like dad.”